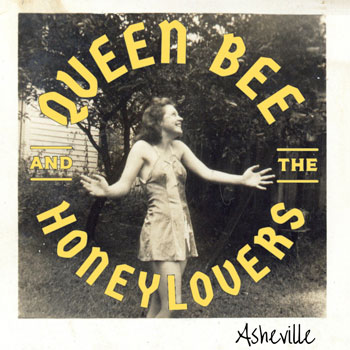 On their debut CD release, Queen Bee and the Honeylovers pay tribute to their hometown with a collection of original songs in a warmly familiar style. Singer and songwriter Whitney Moore dug deep into the history of the mountain city, crafting 14 songs that have one metaphorical foot in the past, the other firmly planted in the here-and-now. Standout tracks are many, but any short list of notable cuts starts with “Beacham’s Curve,” a song that’s both a paean to Asheville streetcars and a tale of forbidden romance. A video for the song includes archival footage of Moore’s father talking about Asheville history.

Elsewhere, the song titles hint intriguingly at the stories that lie within: “Dr. Grove’s Tasteless chill Tonic,” “Helen’s Bridge” and “Legend of Zelda Fitzgerald.” It’s certainly not necessary to know anything of Asheville’s history to enjoy these wonderfully played and sung tunes; each succeeds on its own merits with or without the benefit of historical context. The uptempo music has a cinematic feel not unlike Joe Jackson’s music for the 1988 film Tucker: The Man and His Dream. Stylistically, the Honeylovers mix in pre-and postwar musical styles, so listeners get a healthy dose of swing, ragtime and hot jazz.

My feature/interview with the band is here.