With a surname like Kristofferson, a musician is essentially presented with two options: they can run from preconceived notions, heading in an altogether different musical direction. Or they can embrace the benefits and expectations that come with the famous name, and strive to live up to it. Singer, songwriter and guitarist Casey Kristofferson first chose the first option. Today, the daughter of Kris Kristofferson and Rita Coolidge is ably exploring the latter path. The Casey Kristofferson Band released its debut album, Dirty Feet, in April. 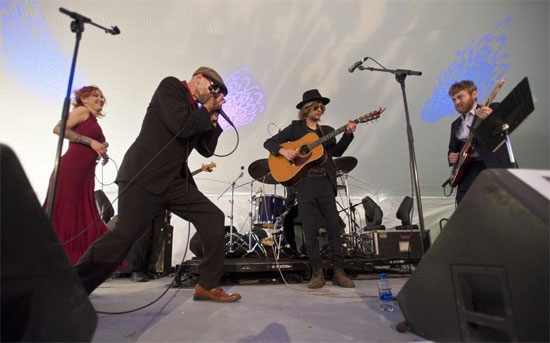 “When I really started getting into music and started playing, I was in the punk rock genre,” Kristofferson says. She had also worked as a go-go dancer, and trained as a classical ballerina (she teaches ballet at the Black Mountain Center for the Arts). “My influences are all over the map,” she admits.

But even when Kristofferson was ostensibly writing punk songs, her lifelong immersion in top-flight songcraft shone through. “I can remember playing in punk rock bands,” she says, “and they were like, ‘It doesn’t matter what we’re playing. Everything that you do comes out country. You do realize that!’”

Kristofferson admits that for a long time, she didn’t realize that playing punk rock didn’t come naturally. Today she fully embraces her classic and outlaw country roots. “I guess I kind of denied it for a while,” she says. “But this is easy for me. This is home.”

Casey Kristofferson moved to Western N.C. 15 years ago, with her then-husband. The couple split three years ago, but both remain in the area; Kristofferson lives in Old Fort with her daughters. Prior to her move, she played in a ska-punk band; “kind of like Sublime,” she says. Once settled, she spent some time with a Nashville-based producer and his associates. “When I started meeting some of those artists, it blew my mind,” she says. A stint working at Acoustic Corner in Black Mountain exposed her to young local musicians she describes as “prodigies from the mountains who would just sit and pick.

“They were self-taught,” she says, marveling at the memory. “it was just amazing to me.”

Kristofferson took all of those influences in, applied them to her true musical roots and began writing songs like the Dirty Feet standout track “Quit Drinking Less,” a tune that draws upon outlaw, honky-tonk and just plain catchy songwriting traditions.

For awhile she was part of the band Yellow Feather; today that band and hers share some members. Yellow Feather was a kind of songwriting collective; the Casey Kristofferson Band is primarily built around the singer’s own original songs.

The band – which also includes local musicians Zack Page (Kristofferson’s former bass teacher) and guitarist Aaron “Woody” Wood – recently played its first high-profile gig, at this year’s MerleFest. “Honestly, I was pretty nervous the night before, Kristofferson says. But it was one of the best shows we’ve ever played, and we had a great crowd.” The artist notes that while she’s performed on big stages with her dad and his band, she’s “really accustomed to singing with him in harmony.” Taking the front-person spot is more intimidating.

Kristofferson admits that having a famous last name can be a two-edged sword. People expect great things from a songwriter who carries her surname. “But in some ways, it’s nice,” she says. “Because people hear the name and might give me a second glance. But it hasn’t ever gotten me – or my brothers or sisters or any of the rest of us – anywhere that we haven’t had to completely earn.” While she emphasizes that her parents have always been encouraging, she notes that “as far as backing of the record, we’ve gone through on our own; there haven’t been any kind of ‘ups’ from the family at all.

She has absorbed some of the important lessons gleaned growing up as the child of those two well-known and respected songwriters. “My dad writes about things that touch people spiritually and on a deep level,” she says. “He feels so strongly about his responsibility as an artist to really get something out there that means something, that sends a message. I’ve respected that a lot.”

From her mother, Kristofferson also learned the value of being true to one’s art. “I’m a mother of three, and I run a ballet school,” she says. “And it does take an incredible amount of energy to go and live this other life and be a musician.” But she knows that her parents did it. “If you’re not serving God through your art, you’re not really serving your true purpose,” she says. “Whenever I get a little doubtful or feel like I’m being selfish or just plain overwhelmed, I remember that this is a gift that I’m supposed to share.”