My first exposure to Kovacs was the PBS retrospective series, which I guess was in the late ’70s.

Yeah. This record came out in ’76. It was nominated for a Grammy in ‘77 for Comedy Album of the Year. And then, the same year, ‘77, PBS showed The Best of Kovacs, which really was where 90% of the people that I talk to remember Kovacs from. I’ll get notes – Jon Spencer from Jon Spencer Blues Explosion basically told me, “I was a kid in New Hampshire and I didn’t know what the hell I was watching, but this was great. My dad sat me down and we watched it.” So, a lot of different people.

I mean, it’s really random. I’ve talked to Gerry Casale from Devo; he’s a big fan. Chris Stein and Debbie Harry from Blondie are both big fans. So his influence is not just comedically, but I think he has such a cockeyed way of looking at things that kind of musicians who went to on some fame kind of gravitated towards him as well. 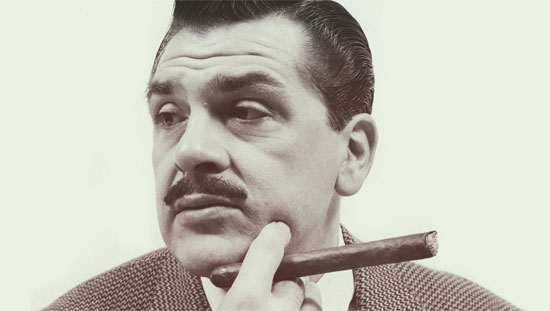 What do you think Ernie Kovacs’ lasting legacy is?

I’m not disparaging Milton Berle or Jackie Gleason or anyone, but unlike most of his contemporaries, I think Ernie really figured out the medium of television before anyone. And he’s still way, way ahead of the pack. Television was starting in the late ’40s and Ernie was starting in the early ’50s; there was no drawing board. He just created it. And how did he know that these things would work? I mean, there’s no way that you could actually have tried that out. Like I said, he wasn’t in Vaudeville, and he didn’t do standup. But creatively, he figured out ways that it did work. So, I think the fact that he was unencumbered with any sort of history let the canvas sort of open up. He could paint whatever he wanted to, because he had this weird idea in his head. And he could pull it off somehow.

This is purely speculative. If he Kovacs had modern technology at his disposal, what do you think he would’ve done with it?

I think in the ’80s and ’90s, the laptop computer would’ve blown his mind. I think he would’ve been working with that medium. I also think that he probably, at this point, would have his own thing outside of the networks or outside of television where he could just do it on his own, whether it was like a video blog or whether it was programming on YouTube or something like that.

He was notoriously – what’s the right word? – he didn’t like interference and network executives. No one should tell him what was funny and what wasn’t funny, what was going to work and what wasn’t going to work. So, I think he would’ve found a medium where he basically controlled everything and didn’t have to listen to anybody saying, “There’s no punchline, Ernie. I don’t get it.” So, I think he’d be doing something on his own.

In recent years, there have been quite a number of Kovacs-related projects that you’re responsible for. There’s the Percy Dovetonsils picture disc, and the Centennial Edition DVD box set, the Take a Good Look box set, and so on. Will there be more?

Yes, in fact, next year in 2020. Pat Thomas and I put together an Ernie Kovacs coffee table book. Basically, what I started to notice was that a lot of the things that I was finding in our archive – and frankly even some things I bought on Ebay because I couldn’t find them – were articles he wrote for magazines. Usually, “men’s magazines,” so to speak. And they haven’t been seen since they were originally published. We also found a chapter of a book that Ernie started before he passed away. We found another book that’s never been published, and we’re taking chapters and all these unpublished things and putting them around all this great ephemera and weird visual stuff that we have in our archive. So it’ll be a really cool deep dive into everything, from his drawings to newspaper articles to credit cards and his entrance card to Aqueduct Race Track … a bunch of weird things. So, that’s coming.

And by the way, I’ll throw this out there. We did find 120 hours of audio-only material. So, whether that’s something for serious radio or another audio release or a podcast or something like that, we’re going to figure out what to do with those next.

And this year, on August 7, at the National Comedy Center in Jamestown, New York – which is the birthplace of Lucille Ball – they’re having an Ernie Kovacs centennial exhibition. It will have physical item and different stuff from our collection that’s going to be on display in the museum for the whole year.

It’s nice after kind of a drought of many, many years that all this stuff is coming to light now. So how, when, and why you did you become involved in the curation and preservation of Ernie Kovacs’ work?

When my mom passed away in 2008, I became the executor of both her estate and Ernie’s estate. Everything that was under her control is now mine. So I had to figure out a way to get this stuff to market. And luckily, Shout!Factory is and was a great partner and they wanted to do some stuff, and Omnivore Recordings was great and wanted to do some stuff with us with audio. I also put out a DVD set of my mom’s [Here’s Edie: The Edie Adams Television Collection]. It was really a little bit of a cottage industry that I kind of started to create.