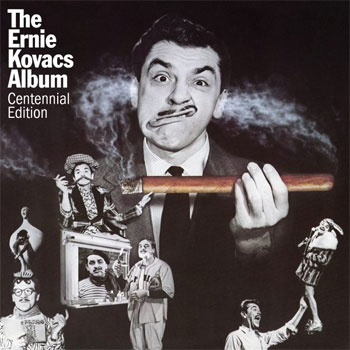 There was no precedent for the comedy of Ernie Kovacs. A pioneering figure in the early days of television, Kovacs brought a bizarre kind of comedy – mostly verbal, but with a visual component as well – to the black-and-white screens of the 1950s. A half century-plus later, his material is still bizarre. Recently, Omnivore Recordings worked with Josh Mills – son of Kovacs’ widow Edie Adams, a TV star in her own right – to reissue a 1970s-era compilation of some of Ernie Kovacs’ most memorable bits. The new CD (The Ernie Kovacs Album: Centennial Edition) collects those and adds some additional material that Mills found while digging through the family archives. Though he never knew Kovacs – the TV star died many years before he was born – Mills is the foremost scholar/expert on Kovacs’ legacy and body of work.

Even though Ernie Kovacs has long had a reputation of visual comedy, these pieces – originally broadcast on television – work without the visual component, almost as if they were designed to be audio only. Did he consciously develop material that was designed to work with or without visuals, or was it just part of his particular genius that they worked that way?

Very interesting question. Because while I don’t know if he initially thought of these particular bits as stand-alone audio pieces, he had been on radio for years. So, there definitely is a part of him that was trying to tell a story without visuals. And I’m sure there is some connection between the two. There were times in Ernie’s career when he was employed, then not employed, then employed, then not employed. And frequently, when he was not on television, he was on radio. We found a bunch of acetates of radio airchecks, and on those we can hear skits and things that he didn’t do on television. So, I’m sure there was a connection somewhere.

There’s such an off-the-wall character to these things that they almost feel like stream-of-consciousness. But to my mind, there’s absolutely no way they could be. Because the stories hold together; you might not realize it until the end, but he knew where he was going with each one from the start, through the middle, to the end … even if we don’t. Did he routine this stuff? Or did he ever do any sort of traditional standup comedy?

No. In fact, my mom was always saying that Ernie was so out-there; his whole idea wasn’t from Vaudeville or standup or performing onstage. Just theater stuff in school and things like that. But his was purely off-the-cuff, top-of-the-head type of wackiness. One of his quotes was that, “Some of my best material is when it’s 15 minutes before air and I’ve gotta come up with something.”

He did think improvisationally or extemporaneously, almost in a jazz kind of way. Often it went very well and sometimes it went completely off the rails. And it’s actually kind of fun when it doesn’t do well because, then, Ernie kind of makes these weird comments about stuff. He’s incredibly relaxed for the pressure of whatever radio show or television show he was on right then. He’s totally relaxed. So, I think some of the stuff might have even been last minute kind of things that he threw together.

His wordplay is often very sophisticated. It’s hard to imagine that all of that stuff would have landed with audiences of the day. Some of it, I imagine, probably went over their head. I suppose they were just caught up in the sheer weirdness of it … ?

For years, he was a columnist for a paper in his hometown of Trenton, New Jersey called The Trentonian. So he definitely wrote well because he did it for many years even before he went on radio. I have poems that he wrote and things like that that are very erudite; they’re super weird and dark. It’s really weird stuff.

We have scripts of Ernie’s that will say, “Ernie improvises for 10 minutes,” and then it’ll go on to the next part. It was literally like, “We don’t know what he’s gonna say, but we have to type something up and this is what everybody’s going to get. Ernie’s just going to talk.” So, I think that that kind of stuff either came from the top of his head or through his experience as a columnist at The Trentonian.

One of the first things I thought of when I was listening – especially that very first piece on the original album, the “Tom Swift” piece – was Firesign Theater. Even though he predates them by many years, I wouldn’t be at all surprised that he was an influence on them. Although, I’ve never read specifically anywhere that that’s the case. Do you know of anybody in any medium who has gone on record as saying that he influenced their work?

Oh, yeah. I mean, specifically I don’t know about the Firesign Theater. Specifically, Joel Hodgson from Mystery Science Theater 3000. Terry Gilliam from Monty Python has said some really nice things about Ernie. Paul Reubens’ Peewee Herman character, for sure. Kids in the Hall.

And everybody asks about Letterman. Letterman says he was more of a fan of Steve Allen, but the writers for the original Late Night with David Letterman were fans of Ernie’s. I think that a lot of things like Stupid Dog Tricks and weird things like that got on the air because it was a very Ernie thing to do. The throwing the pencil at the camera and breaking the fourth wall, that was very Ernie. So, there’s a ton of different people.

When the first box set came out, I sent a mailing out to Jon Stewart and Jimmy Kimmel just so they had it. And I got a really nice note back from Jimmy Kimmel on his letterhead: “I’m a huge fan, and my grandfather and I used to watch him together. I have such great memories, and your mom was amazing.” I thought that was really cool that he actually took the time and wrote me a personal handwritten letter.