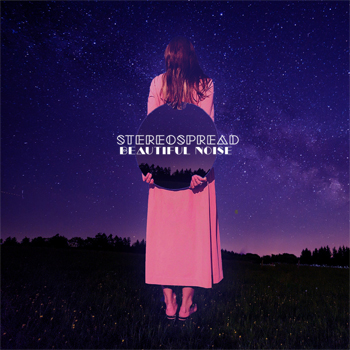 Jumping ahead of critics who might apply their own subjective labels to the band’s music, Asheville-based Stereospread has taken on the task itself, calling the sounds it makes “indietronica.” Launched in 2012 by James Hopkins and Sara Snyder Hopkins, Stereospread is a pop-leaning duo.

The pair’s debut recording was a 2015 EP, Come Back Home. In less than 13 minutes, that three-song release established the Stereospread sonic aesthetic: creamy synthesizer pads, crystalline piano chording, a soothing and hypnotic rhythm and dreamy vocals featuring heavenly harmonies. Shades of Tears for Fears reveal themselves in the title track, and there’s a strong pop sensibility; this is music designed to stick with the listener.

“God’s Own Children” finds Sara employing a breathy lead vocal. The instruments on the track are intentionally indistinct; they work together to create a seamless whole. “We Will Never be This Young Again” is a more uptempo dance track reminiscent of Human League or Thompson Twins; brittle electronic drums give the song an ’80s feel, but Sara’s assertive vocal gives the song an anthemic feel.

Now, three years later, Stereospread returns with a full-length album, Beautiful Noise. No relation to (nor musical approaches in common with) Neil Diamond’s 1976 album of the same name, this Beautiful Noise showcases the refinement and development that has occurred in the interim between Sterospread’s first and latest releases.

At once, it’s clear that there’s a more assured approach to placement of vocals on this new release. Sara’s lead vocal on songs like “Magic Place” are way out front. Whereas one might wonder if the vocals on Come Back Home were hiding, here that’s not even a consideration. The instrumental bed is subtle and in service of the vocal. Some very odd electronically treated vocals flit in and out of the mix, occasionally duetting with Sara. As good as the songs on the EP are, the new album shows a major leap in songwriting quality.

The use of brass (or very good brass samples) on “Spend the Last Night With Me” demonstrates an expanded use of sound textures. Again, the overall instrumentation is less the focal point of the song — it’s a vehicle of the lead vocal, and that’s the defining characteristic of this album.

Heavily treated vocals on the infectious, mid-tempo “Havoc” suggest Girogio Moroder producing ABBA. The title track opens with energetic drums that might even be real; save for the synth lines, this could be a modern power-rock tune. Sara’s lead vocal here sounds remarkably unlike her work on the previous tunes: More in an Annie Lennox vein, she makes the point of displaying her versatility.

“Streets” introduces electric guitar, sparring with multiple synthesizer parts and a skittering percussion bed. It’s the knottiest, most aggressive cut, but like many of the tracks on Beautiful Noise, it serves to underscore just how varied a musical palette the duo commands.

The NSFW “Are You Listening (Hey Ya)” continues Stereospread’s exploration of textures; its minor-key arrangement is a bit like a less overwrought Nine Inch Nails. “Outlawed Here on Earth” continues the minor-key feel but digs into a space-pop vibe, with stuttering sequencers and wordless vocals floating in and out of the mix. A chill version of the title track sounds a bit like what might have happened if Alan Parsons was brought into the project: Its quiet trip-hop flavors draws listeners in.

The nine-song collection concludes with the uncharacteristic “Seeing Red.” It features acoustic guitar picking and the sparest arrangement on the whole set. It eventually opens up to include a bit more instrumentation, but it’s a decidedly understated manner in which to close an album.

It seems unlikely that listeners will have to wait another three-plus years for a follow-up to Beautiful Noise. Mere days ago, Stereospread debuted a catchy new song, “Can’t Call it Love,” already being described by the duo as “the first demo from the upcoming album.” And while everything to date from Stereospread has been self-produced, the band have announced that the next release will use an outside producer.