Home  »  Americana • folk • interview   »   For Nikki Talley, Home is Where the Muse Lives

For Nikki Talley, Home is Where the Muse Lives

Based since 1996 in Western North Carolina, singer-songwriter-guitarist Nikki Talley took to the road about six years ago. With husband and multi-instrumentalist Jason Sharp, she toured constantly, traveling across the United States in a converted passenger van named Bluebell. For many years, that nomadic existence defined her musical persona; most every story about Talley—including this one—makes mention of it.

Over the past 11 years Talley has released three studio albums plus a live set, 2012’s Live at the Altamont Theatre. And during that time she and Sharp have played hundreds of live shows every year, scheduling regular visits back to to the Carolinas to play in front of old friends and fans before heading off to the next gig. “We would come back annually, but we’d only stay for two month or so,” Talley says. “And then we’d take off again.” 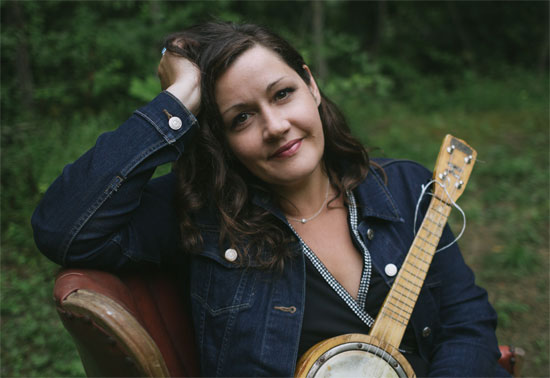 But now that the couple has a child, they’ve made some changes. “We’ve started to plant some seeds and let them sprout at home,” Talley says. Today, she and Sharp once again call North Carolina home. “We’ve got some acres about 30 minutes from the nearest stop light in Brevard,” she says. “It’s very nice being on the road and being around people, but this is a fantastic place to unwind and slow down. It’s nice to kind of settle down a little bit. I hadn’t had a garden in six years.”

But Talley and Sharp haven’t forsaken the traveling life completely. “We first took our daughter on the road when she was two months old,” Talley says. “And we’ve got a car seat ready for her.” Bluebell has logged more than 307,000 miles, and while the couple have scaled back their touring schedule, they continue to schedule regional dates within a six-hour radius of Brevard. “Bluebell’s still our adventure-mobile,” she says with a smile.

And while the road certainly provided inspiration for creating new music, Talley’s prodigious songwriting continues at home. “I have a ridiculous amount of songs,” Talley says. “I’ve probably written 150.” She says that the tunes vary widely, as they variously came about during what she calls her “piano phase” or “banjo phase.” Selecting the right songs for a fourth studio release is one of her current projects. “I’m ready to do another album,” she says.

Talley emphasizes that while she’ll likely do much of the post-production work—mixing, mastering and editing—in a professional studio, she hopes to record the basic tracks at home in rural Transylvania County. “There’s nothing like making an album where you’re the most comfortable, creative and free,” she says. Talley wants the next album’s character to be “homegrown and homemade,” she says. “Because the albums that I really, really like sound like [they were recorded] in someone’s living room.”

A homespun quality would reflect the lives that she and Sharp are leading today. “After having a baby, I feel like I want to be a little more relaxed,” Talley says. “I’ve lightened up a lot. I’m okay with things that aren’t as perfect.” She says that she focuses less on making music that’s specifically designed for radio play or widespread accessibility. “I’m kind of saying to myself, ‘Write the song for you. Other people will relate to it.’ Because that’s the way art happens sometimes.”

And Talley’s art is a product of her life in 2018. “I’m not writing about botched relationships, having your heart broken,” she says. “I’m moving on to a different phase of the good life, writing stuff that is more about the human happy, lovey experience.” And she readily admits that her infant daughter acts as a kind of muse. “She’s definitely influencing my songwriting,” Talley says. “And in a good way.” She also admits that having a baby influences her creative work habits, too: “I need to write quicker, because her naps are getting shorter!”