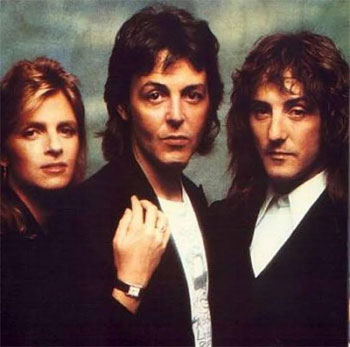 I have a bootleg recording which is probably a rough mix of a working version of Back to the Egg, and the version of “Getting Closer” on it has you singing lead. Was that the original plan?

I was probably just doing it along with the backing track or something. I don’t remember, to be honest. I’d come to [Paul] with songs and we’d all be jamming it and we’d all start singing along. I’ve done it before. Somebody told me about that and I completely forgot about it. But yeah. We’ve done a lot of experimental stuff, and a lot of it just doesn’t see the light of day.

I know that the Japan bust is really what ultimately ended up spelling the end of the band, but I read that your working relationship with Paul began to deteriorate somewhat during the album sessions. With the benefit of hindsight, what do you think was at the heart of that?

I was still on those other albums, Pipes of Peace and Tug of War. So I don’t know where you got that from; it didn’t really deteriorate. It was just that I was disappointed because I wanted to go on the road. That’s what it was, before that. It wasn’t our relationship, as far as me and him; we didn’t fall out or anything like that because [if we had,] I wouldn’t have done those other albums. But I was really looking forward to the tour. Because I was kind of getting tired of being in the studio all the time and not touring enough, and that was kind of a big disappointment.

Wings made a promotional television program with several music videos for Back to the Egg. Of course, that was 1979, almost two years ahead of MTV. You were obviously a little ahead of the curve there. Did you have the sense that you were doing something that would very soon become the standard for recording artists?

No. No idea. It’s just that video started to become very popular, and then it wasn’t all about the music, all of a sudden. It was about visuals as well. But you know, the very first Moody Blues song, “Go Now,” was actually the very first filmed, promotional song. Before The Beatles did one, yeah. And so, we were always into the visual side of things. So, when that became the norm to do, that’s what we did for that album. We just did a lot of videos. But the Beatles were doing it. Come on, they were doing it before.

Speaking of MTV, I actually went to Russia on my own to do some shows after Wings. I was there with MTV. That’s when MTV first went into Russia.

Wings did tour the UK, at least a bit, in support of Back to the Egg. There’s a really good soundboard recording of the Glasgow concert, and it’s an interesting set list. Were you pleased with how the band performed on that tour?

Oh, yeah. I think it was a great band. That’s why I was so disappointed we didn’t go to Japan because the band was starting to get really good as a live band. And Scotland … I mean, that’s a second home to us, Scotland. The work we did before was all done in Scotland; all the writing, particularly. So, anyway, we always had good Scottish support. Let’s put it that way. “Mull of Kintyre” was a huge Scottish hit. It’s like an anthem up there now.

In recent times, both Wildlife and Red Rose Speedway have gotten really lavish, expanded deluxe reissues. Were you consulted on any of those projects?

Not at all. But I never really got involved in any of that side of it. It was all more Linda and Paul that ran that side of things. Obviously I’d throw in a few ideas at them or whatever along the way. But when it came to remastering, I was never in on that because there’s no extra work involved except studio work, which really involved an engineer and Paul. They do all the work, and then they present it to you and say, “This is the remastered version.”

And then, Paul would be involved in the publicity side of it and the artwork and stuff like that. But generally speaking, I wouldn’t get involved in any of that.

Remastering: it’s a sign of the times. When they remastered the first Moody Blues album, the first one that I was on, it was amazing. I was very surprised at the result. You could actually hear all the instruments. How they do it is still a mystery to me, but they did a good job on that. So, that’s basically what you do, you just leave it up to the studio people to really master it.

With the benefit of many years of hindsight, do you think Wings had more to say? Or had it run its course by ‘80?

No, we could’ve just gone on. We were just friends, family, that kind of thing. We could’ve just carried on making an album. When you sort of take time off like that, it’s hard to get back into it. Anyway, when I decided to go off and promote one of my own albums, that was really the end of it because I had a solo album that was coming out. And it was just something to do. And then, I got busy doing that, and then Paul went on doing his own thing again. We kind of drifted apart, really. But we never fell out or anything that; none of that went down. We’re still friends.

Coming soon: more from my conversation with Denny Laine.