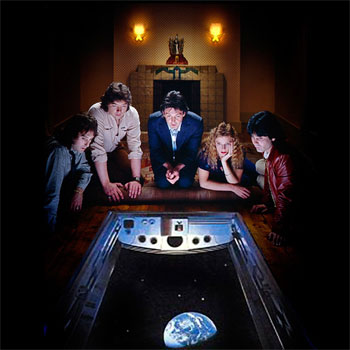 In the very early 1970s, not long after the Beatles had broken up, Paul McCartney decided he wanted to have a band again. With wife Linda, he recruited Denny Laine, a multi-instrumentalist, along with other musicians.

It’s sometimes forgotten today, but Laine already had a well-established career long before Wings. He was the original lead singer of the Moody Blues (he was inducted into the Rock & Roll Hall of Fame for his work with the band). In the earliest days of the group, the Moody Blues were an R&B-rooted band; the Birmingham band scored a hit with “Go Now,” a song that Laine would revive a decade later on the Wings Over America tour (there’s a great live version on that triple-LP set). After leaving the Moodies, Laine embarked upon a string of short-lived yet fascinating projects, eventually being called up to join McCartney.

The lineups of Wings would change over the years, with the McCartneys and Laine as the solid foundation of the band. A string of albums and singles were worldwide smashes; Laine co-wrote some of the band’s biggest hits, including “With a Little Luck” and “Mull of Kintyre.” Wings’ final LP, Back to the Egg, was in some ways a return to the harder-rocking sound of Venus and Mars-era band, though the eclectic LP had its share of mellow tunes like “Arrow Through Me.” But ultimately, the record – which received mixed reviews then and today sparks heated debate among fans – would be the last release from Wings. On the occasion of Back to the Egg‘s 40th anniversary, Denny Laine discusses Wings’ final LP and the final days of the band.

Back to the Egg was the first Wings album crediting anyone other than Paul as a producer; you brought Chris Thomas on board. What can you tell me about making the album?

Well, first of all, Chris Thomas is a great producer; he worked with the Pretenders and all that stuff. And also, Chris helped us with the Wings Over the World live recording [for theatrical release]. There were a few overdubs, and he helped us with that. Paul and I don’t usually get along that well with producers because we kind of do it mostly ourselves, but we got on very well with Chris. We admired him a lot.

And so, he came in and co-produced that album. Steve [Holley, drummer] and Laurence [Juber, guitarist] were people who I knew … I met Laurence and I didn’t know him well. But he’d asked me, “If you ever want a guitar player, give me a shout.” And he knew we were back down to just the three of us. And Steve Holley was a neighbor of mine who was working with Elton John and Kiki Dee at the time; he was a neighbor. He met Paul and Linda at my house one day. So, we all went down and had a little jam down at the studio and started from there, really.

Back to the Egg was done in a castle near Paul’s house down on the South Coast, and that was an interesting experience because anywhere new gives you new influences. Wherever you are, you’re going to have a different approach to the music. Working in a castle was amazing because there’s a different sound you can get. That’s important. These big, thick walls and just certain sounds.

We’d just go wherever we get influenced. That’s what we did with Band on the Run: we went to a country [Nigeria] where we loved the music; also, Ginger Baker had a studio out there.

But the idea was to take that album on the road, and that was the problem because we got busted in Japan. And that was the bad part of that whole thing. We were ready to go tour Japan, then America, and then the rest of the world. And of course, when we got busted, that effectively ended the situation. That was the end of that for a while.

The album itself is very varied. When it does rock, it rocks a lot harder than London Town did. Was it intentional to make an album that had more rocking songs, or was it simply a reflection of the songs that you had?

Well, Paul was trying to do stuff that was kind of simple and rocking again. Not too much of a big production. And he wanted to get that band into shape, as a live band. So a lot of the recordings were cut live. London Town, there was a lot of overdubbing done on that. But yeah, the idea was to knock that band into shape as a live band to tour the world, starting with that album. So, I think he stuck down to basic, simple, rocky type songs for that reason.

Do you have any interesting memories surrounding the “Rockestra” sessions?

Well, only that I knew most of the people. Yeah, I did. I knew all those people. John Bonham was a friend of mine, Ringo obviously. I knew all those people: Pete Townsend, Dave Gilmour. I knew them or had met them all at one point. So, that was one of the reasons we picked those people is because they’re people we actually knew a little bit. And it was a fun experiment, really. It could’ve gone on to other things at some point in the future. We just didn’t develop into that, but it was a fun idea; let’s put it that way. It was a simple piece of music to start with.