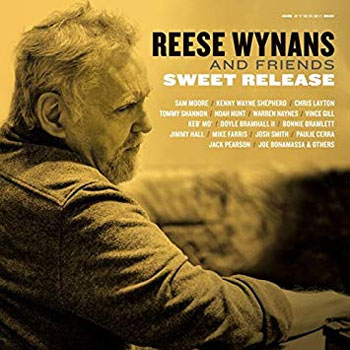 In the liner notes for Sweet Release, producer-guitarist Joe Bonamassa poses a rhetorical question: “How do you make it a Reese record as opposed to an album of guitar players with Reese?” His solution, he explains, is to give the keyboardist the first solo on each song.

Whether that approach achieves the goal is up to the listener. Sweet Release opens with a faithful – perhaps a shade too faithful – cover of Steve Ray Vaughan’s “Crossfire,” a song that Reese Wynans co-wrote and played on Vaughan’s 1989 In Step. Despite having Kenny Wayne Shepherd on lead guitar, Sam Moore on lead vocals and a horn section, the new recording adds little to the original.

Things improve from there; Wynans’ skillfully aggressive organ playing is all over the album, and his solo runs are tasty indeed. “Say What!” doesn’t exactly give him the first solo, unless one considers Shepherd’s lead guitar as the substitute for a vocal. Other cuts explore styles beyond blues: “That Driving Beat” sounds like a modern-day Stax revival, and a stirring cover of Boz Scaggs’ “Sweet Release” shows that when done with care, a multiple-lead-vocal arrangement can work: the song features eight singers (including Keb’ Mo’, Bonnie Bramlett and Warren Haynes) each taking a turn.

Wynans – who up until this point on the album has been merely part of the band – takes to the piano for a fiery reading of “The Shape I’m In,” one of the most distinctive performances on the album. Another highlight follows: a sublimely instrumental and orchestrated cover of Vaughan’s “Riviera Paradise.” The keyboardist stretches out on the smoldering track, showcasing subtlety instead of fireworks.

A stripped-down cover of Piano Red’s “I’ve Got a Right to Be Blue” puts the spotlight on Wynans’ piano work, while The Meters’ “Soul Island” gets a suitably funky instrumental treatment featuring gurgling B3. Taken as a whole, Sweet Release showcases the work of a man who generally works as part of an ensemble. So its’ something of a welcome surprise when listeners reach the final track; they’re rewarded with a majestic grand piano solo version of the Beatles’ “Blackbird.”