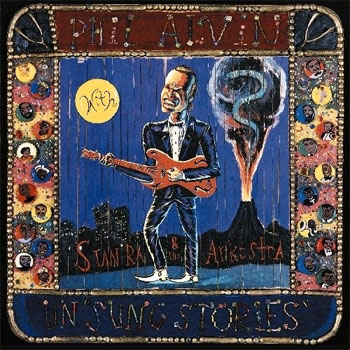 With the departure of Dave Alvin in 1986, it looked the Blasters were finished. So it was no surprise that guitarist Phil Alvin took the opportunity to record and release his first solo album, Un “Sung Stories”. But Alvin’s solo debut found him traveling far from the straight-ahead rockabilly sounds of the Blasters.

On three of the album’s ten cuts, the singer-guitarist is backed by Sun Ra and His Solar Arkestra; those recordings represent Sun Ra’s final recordings with his longtime band. (The Dirty Dozen Brass Band and Lee Allen are featured on one track, the New Orleans-flavored “Someone Stole Gabriel’s Horn.”)

The Arkestra plays it relatively straight when backing Alvin; “The Old Man of the Mountain” presages the jazz revival sound that Jimbo Mathus would explore a full decade later with the Squirrel Nut Zippers. Sun Ra himself is most evident playing piano on the jazz age classic “Brother Can You Spare a Dime.”

Half of the album’s cuts – interspersed with the Sun Ra tracks – are astoundingly stark in arrangement. “Death in the Morning” is a gospel-flavored number with vocal chorus, spare guitar and occasional snare drum. “Daddy Rollin’ Stone” comes closest to the sound of the Blasters, but even it is a model of seething restraint. “Collins Cave” features Appalachian fiddle, Alvin’s emotive vocal and little else.

Alvin reactivated the Blasters later in ‘86 without his brother, and the band continues to present day. Against that backdrop, this album seems lost in time. A kind of potted history lesson in album form, Un “Sung Stories” is deliberately eclectic, and on its original release likely confused fans who appreciated the Blasters’ highly charged musical attack. But as a window into the music that informed Alvin’s sensibility – and with the understanding that comes with hindsight – it makes perfect sense.

In 1986, the CD format was on the rise, but Slash, Alvin’s label at the time, chose to release the album on LP and cassette only. Wounded Bird issued a CD version (now out of print) in 2012, but a new reissue of Un “Sung Stories” marks its CD debut in the U.K.