Bill Kopp: One of the qualities of your work that has always struck me is the way that you approach each project with what I would call intention. An album like Caravanserai probably didn’t seem like a commercial bid at the time, and it really wasn’t. It was not a commercial album. Supernatural, on the other hand, was. But they’re both authentically you. You brought the same authenticity to both kinds of projects. Can you tell me a little bit about that?

Carlos Santana: What Santana is, it’s a frequency of certain elements that makes people feel at home. A lot of people are not at home in their own hearts. Some people are not happy with themselves; they’re miserable. So, our music is assigned and designed to take you out of your misery. And as long as you hear the album, it takes you to a place where you celebrate you, you celebrate your life.

Someone called my wife a “goody two shoes,” because Cindy is like myself … we’re kumbaya people. And I always say, “Well, that’s okay. I can live with those names because I want to bring beauty from within.” People have a lot of beauty that they’re not letting out. And so, our music invites people. I see it all the time. You start crying and laughing and dancing and you don’t even know why. And then, the music makes you feel like you need to go to the closet and clean a lot of shit that don’t fit you no more. Because all of a sudden you feel differently about yourself, and about the world. And that’s what this frequency can and will do for you. We’ll take you outside, out of your emotional perception investment. Whoa! 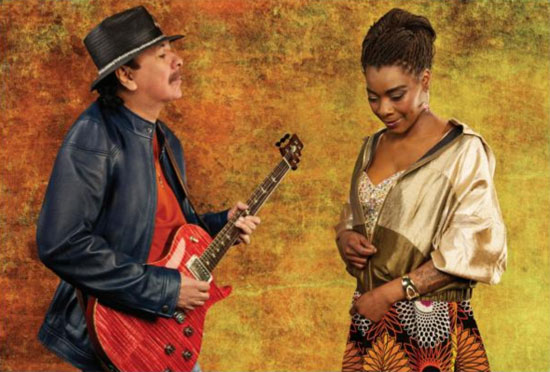 Can you tell me a little bit about how the culture of the San Francisco Bay Area had an impact on your musical outlook and your overall approach?

Yes, thank you for asking that. For me, my alma mater was the streets of San Francisco. The Fillmore West was the main university. So, I learned from Haight Ashbury and of course The Grateful Dead. For me, everything was like one consciousness with Charles Lloyd, The Chambers Brothers, Sly Stone, Jimi Hendrix, Ravi Shankar, all that.

But at the same time, it was Martin Luther King, Malcolm X, Dolores Huerta, and Mahatma Gandhi. Because from Bill Graham, I learned how to open my heart to both and offer myself.

You’ve mentioned about the special sensual connection that women had with Santana music early on. But were there people at some of the band’s early shows who sort of scratched their heads and just didn’t get it?

Of course. One of the funniest things that I first read was in Rolling Stone review, a critic. They said, “This band sounds like a psychedelic mariachi rock band.” I was like, “Damn. Next thing you know, they’re gonna ask me to play piñata music for him at his bar mitzvah!” I just looked at it like, “Okay. That’s that person’s perception, but it’s not really what’s happening.”

Because we don’t show up in a certain country waving the American flag and stuff like that. We don’t do that. Our flag is a different flag. I live here because I honor it, but my flag is the human heart, the human spirit. Anything else is a corporate, corrupt business. And we know that. People may not want to hear it, but you know what? Sometimes when you have a fever of fear, you need to hear that you need medicine for that fever.

With regard to music specifically, what’s the best advice you ever got, who gave it, and did you take it?

The best advice I ever received was something that Eubie Blake, this piano player said. He was in his 90s, almost 100. And he looked at the camera and he said, “Well, what do you have to say to people about your music?” And he said, “If they just listen, I got ‘em.”

I thought that was awesome. I said, “That’s it right there.” And it’s not arrogance, man. It’s confidence in your spirit. I have confidence that what comes out of my fingers and my heart is going to touch somebody. It’s going to rearrange molecular structure. That’s what we do. That’s who we are.