2019 is an important year for Carlos Santana. It’s the 50th anniversary of the Woodstock festival, featuring a breakout performance of his then largely-unknown band, two weeks ahead of the debut Santana LP. This year also marks the 20th anniversary of Supernatural, the end-of-century “comeback album that returned Santana to the top of the charts, helped along by the smash single “Smooth.” But the guitarist didn’t need a comeback, because he never went away. His career has been filled with twists and turns, from pop-friendly hit singles to ambitious, jazz-immersed collaborations with fellow guitar virtuoso John McLaughlin and much more.

In recognition of this year’s landmark status, and in connection with a high profile show in the San Francisco Bay Area (the region from which the Santana band originally came), Carols Santana granted me a rare interview, which formed the basis for a feature than ran in four Bay Area altweeklies. (You can read that feature HERE.) But even that expansive piece couldn’t contain all of the fascinating and illuminating conversation. So here I proudly present the best previously unpublished bits from our interview. 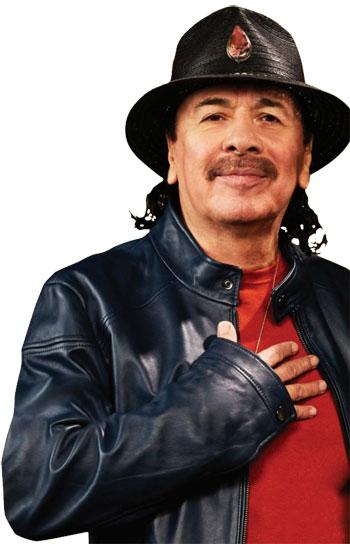 I read your autobiography/memoir The Universal Tone. In the book, you discuss your deep appreciation and understanding of the debt that popular music owes to African cultural traditions. And your latest album, Africa Speaks helps listeners – if they didn’t know it already – to hear the connections between African and Latin, especially Caribbean music more clearly, but in a rock context. What specifically inspired you to make the new album?

The nutrients and ingredients and the rhythms of Africa immediately give you hope and courage. They encourage. So what does that mean? It means one word, joy. Joy knows no fear. Joy and fear don’t get along. Fear is like the fog in San Francisco, but joy is the sun. And eventually, the fog will dissolve and the sun will not. So, for me, the rhythms of Africa have the nutrients and ingredients of hope and courage, which is joy. They make you dance.

I’ve always thought it interesting that the best musicians are the ones who are the most serious students of where the music comes from.

Well, yes. As I say, it got my attention when I first Mr. B.B. King. And of course, I grew up right in between Mr. B. B. King and Tito Puente. And along the same time, I discovered [Babatunde] Olatunji and Eddie Palmieri and Miles Davis and [John] Coltrane, Herbie Hancock, and of course John Lennon and Bob Marley. Because for me, it’s about consciousness; the consciousness in music.

I remember John Lennon and his wife Yoko being very vocal about what enormous contribution that African music had in them, whether it’s Chuck Berry, the Marvelettes, anything from Motown, Isley Brothers, “Twist and Shout.” Later, when they started doing Rubber Soul and Sgt. Pepper’s, because they were affected by Bob Dylan; they went somewhere else. But let’s remember that Bob Dylan’s main guy was Lightnin’ Hopkins. Same thing. Van Morrison’s main guy is John Lee Hooker. So, we all have someone that we hold onto to get our identity together.

From my perspective, there are a handful of artists – Neil Young, Todd Rundgren, David Bowie, and I put you in that category as well – whose work demands a great deal from the listener. Because you don’t do the same thing over and over again. What responsibility do you feel to your fans, and what do you expect in return?

I have neither one of those territories that I hang around with. I don’t expect anything from the fans and I don’t wake up to please anybody other than my heart. So, therefore, I don’t have any weird pressure to do what my fans tell me to do. No, it doesn’t work like that. I don’t wake up to do that. I wake up, basically, and I say, “Thank you.” Gratitude, thankfulness, deep appreciation for another day. And then I know if I’m actually feeling those three things, I can create miracles and blessings. The miracle for me is that I’m 71 years old. I have energy of a 27 [year old] with a lot of thirst for adventure. I can hardly wait to get into the next thing so that I can be at the peak of my brilliance … like you.

When you made the 2016 reunion album Santana IV, you self-produced. For the very different Africa Speaks, you worked with Rick Rubin. He has kind of a reputation as a producer that artists turn to when they want to “get back to their roots.” What was your motivation for choosing to work with him?

Hope, trust, and faith that he has the missing puzzle [piece]. We recorded 49 songs in ten days. We recorded and then we went to Australia and New Zealand. Then, [vocalist] Buika came while we were gone; she sang lyrics and created melodies and all kinds of stuff around what we did. So, I hadn’t shaken hands with her or looked here in the eye until the second [session]. So, I think what I really mean to say is that my reason for reaching out to Rick Rubin and Buika is because I felt that those are the two spirits that would bring this particular adventure to a supremeness.

Each song [on Africa Speaks] is like an arena. The ones that we did with Buika, these 11, 12 songs, I don’t think anybody else could fit in there other than Buika, except for Laura Mvula; she did a little bit on one of the songs. And one thing that is a landmark for this album is the first time that I … people have been saying it for years, “When are you going to have a woman in your band?” And now we’ve got two! My wife’s played drums [in the band] for the last three or four years. Yeah, she’s incredible. And [Africa Speaks] is album of Santana featuring Buika; she’s the main vocalist leader. And I have a lot of deep appreciation and a lot of belief that this is something the world needs right now. Because the world needs – I’m gonna call it like this – “mystical medicine music.”