Note: I’ve interviewed a bunch of these artists. Blue-highlighted hyperlinks will take you there. — bk

In the concert business, package tours are nothing new; as far back as 1959, Dick Clark’s Caravan of Stars crisscrossed the country, bringing a busload of hitmakers to American audiences. And legacy acts touring in support of their back catalog (rather than introducing new music) has been a successful business model for decades. But a summer 2019 package tour billed as “The Royal Affair” combines the best of those approaches, applying it to durable rock of the late 1960s and early ’70s. 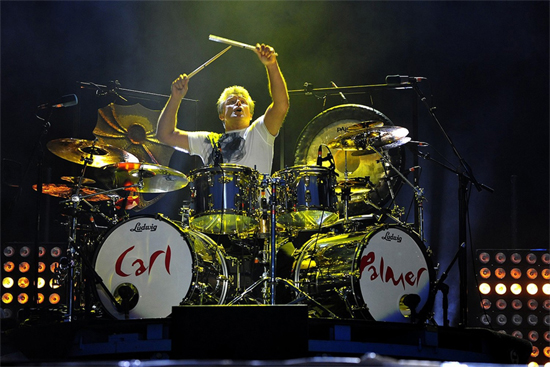 Launched in 1968, Yes has gone on to become one of the most successful and enduring bands in the progressive rock genre. Though the British group’s lineup has undergone perpetual change, today the band is led by longtime lead guitarist Steve Howe, and includes several musicians who have been with the band for decades. For this tour, Yes revives deep album cuts like “The Gates of Delirium” from 1974’s Relayer. They’ll also play material from John Lennon’s solo catalog (Yes drummer Alan White played on several Lennon sessions).

One of Yes’ few peers in progressive rock was the classically-influenced trio, Emerson, Lake & Palmer. Today both keyboardist Keith Emerson and bassist-vocalist Greg Lake are gone, but drummer Carl Palmer leads his own group, ELP Legacy. Palmer wisely leaves keyboards out of the mix as he delivers thrilling new spins on classic material.

For this tour, the traditionally instrumental ELP Legacy is joined by Arthur Brown. Brown gained notoriety for his 1968 hit. “Fire” from his band The Crazy World of Arthur Brown. That group featured a pre-ELP Palmer on drums. Today at age 77, Brown has lost little of the incendiary energy he brought to ’60s audiences.

One of the most successful rock groups of the late ’60s and early- to mid 1970s was the Moody Blues. Their string of hit albums provided the soundtrack to a generation. While the Birmingham, England quintet hasn’t released any new music in decades, the group continues to tour. For “The Royal Affair,” bassist-vocalist John Lodge steps out on his own.

The ’80s are represented in this tour as well: progressive-pop supergroup Asia scored a succession of MTV-era hits. Founding members Steve Howe (doing double duty with Yes) and Carl Palmer (returning to the stage after his ELP Legacy set) lead the band through its classic songs plus new arrangements of other artists’ material.

Fans of the more ambitious end of music from the rock era will be served a three hour-plus smorgasbord of delights on the “The Royal Affair” tour; it represents a unique opportunity to see some of rock’s most fascinating artists as they breathe new life into old classics.