The Drive to 1981 Begins: A Look Back at Robert Fripp’s Masterful ‘Exposure’ (Part 1) 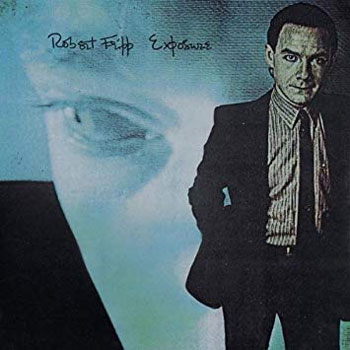 Guitarist Robert Fripp has long been one of music’s most intriguing figures. Largely operating outside the pop mainstream (and, when he can, outside the traditional machinery of the music business itself), Fripp is that unique artist who expects certain things from his audience. He believes – and operates according to a belief – in the clear distinction between listening and merely hearing. He began his public career with King Crimson in 1969 (his earlier music with Giles, Giles & Fripp would only be discovered long after King Crimson was a going concern), and with some notable breaks, Fripp’s ongoing musical explorations with and without the group have continued until present day.

And it’s one of those notable breaks with which this essay concerns itself. After King Crimson made what many consider its finest album, 1974’s Red, Fripp disbanded the group; he did so much to the consternation of his bandmates (drummer Bill Bruford, bassist/vocalist John Wetton and newly-rejoining multi-instrumentalist Ian MacDonald). For the time being anyway, Fripp’s interest lay outside the framework of what he felt he could do within King Crimson.

Over the following five or so years, Fripp spent much time in New York City’s Hell’s Kitchen district. There (and elsewhere) he involved himself in projects that sometimes found him working as sideman, sometimes as collaborator, occasionally as band leader, a few times as producer, and often as a solo artist. He worked with some of the most original, groundbreaking and generally outside-the-box artists in music (then or now), a list that would include Blondie, David Bowie, Phil Collins, Brian Eno, Peter Gabriel, Daryl Hall, the Roches and others.

With Eno, Fripp had developed a radically new approach to guitar music, a live-plus-tape-loop technique dubbed Frippertronics. Wholly unlike the guitar sounds he had brought forth with King Crimson, his hypnotic new style expanded his already wide musical palette.

But Fripp could make guitar skronk with the best of them; some of his noisier works presage the kind of no-wave sounds that would eventually become associated with bands like Sonic Youth (from whom a significant debt is owed to Fripp).

And when Fripp decided – somewhat reluctantly – to compile his debut solo album, he managed to combine all of his interests and approaches onto a dazzlingly eclectic and arresting record. Released in 1979, Exposure isn’t just Robert Fripp’s debut as a putative solo artist; it’s a sampler that explores the depth and breadth of the man’s talents and skills.

Apparently, Exposure wasn’t initially supposed to happen, least not in the form (and the time) it appeared. As Fripp – who in doing so would display both his forthright nature and inscrutability at once – would explain in the inner-sleeve liner notes of Exposure, the album grew out of an aborted larger project (my comments in brackets):

This album was originally conceived as the third part of an MOR [middle of the road(!)] trilogy with Daryl Hall’s solo album Sacred Songs and Peter Gabriel II [aka Scratch], both of which I produced and to which I contributed. With the non-release of Sacred Songs and the delay by dinosaurs of this album it is impossible to convey the sense which I had intended.

Instead, Fripp goes on to explain, Exposure would now be the first entry in a newer trilogy, with the other two eventual works to be Frippertronics and Discotronics. When those did eventually appear, the former manifested as 1980’s God Save the Queen/Under Heavy Manners and 1981’s Let the Power Fall, with the latter taking the form of a self-titled 1981 record by a new art-punk band, The League of Gentlemen. And by 1981, another new group, originally called Discipline, became King Crimson Mk IV. 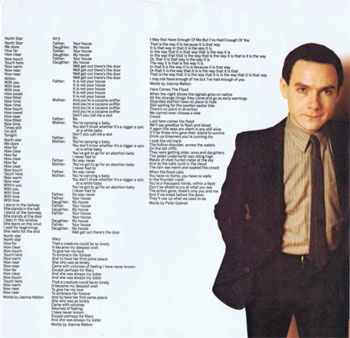 The aforementioned trilogy would come to be described (by its creator) as The Drive to 1981. With the benefit of hindsight and context, all of the threads of Fripp’s work prior to and in the wake of his debut come together (if not always neatly) on Exposure.

“Preface” is the opening track. A snippet of conversation – audio verité style – opens the piece. It’s Brian Eno, speaking to Peter Gabriel. He says, “Er, can I play you, um, some of the new things I’m doing, which, I think, could be commercial?” Perversely, that’s followed immediately by some wordless vocal harmonies – stacked not unlike Frippertronics guitar lines – that are anything but commercial; Beach Boys it ain’t. Then a voice does a count-in for a song (“three, four”) followed not by music but by the ringing of a telephone. Someone coughs, rises from a chair and walks across the stereo spectrum (left to right) to answer it.

Instead of a voice, we hear a tinny, low-fidelity sound of Fripp’s manic, vaguely punky electric guitar. After a few seconds, a second guitar – sounding much like the first – joins in higher fidelity and much louder. “You Burn Me Up I’m a Cigarette” is a Frippian rethink of classic ’50s rock ‘n’ roll, with Hall and Oates’ Daryl Hall on lead vocals. The song is structured vaguely like standard I-IV-V early rock, but with enough off-kilter detours to twist it out of classic form, nearly beyond recognition. Stranger still, the song’s whacked-out yet clever lyrics come courtesy of Fripp himself; writing words is something he had very rarely done and would almost never do again.

Click here to continue; we haven’t even finished Side One yet …