With regard to the older songs for which you recorded the new versions on Antidote, was there kind of a specific mindset at work in terms of how you approached them differently?

Absolutely, absolutely. First of all, one factor was a totally practical one. Because if I had had the time to devote to it, I might have written all new music for the record. But there wasn’t time. Also, there are fans of some of those earlier records who would recognize the melodies. So, I wanted to take some of the earlier pieces, but when I began arranging the music, I immediately wanted to have a different spin on each one of the older songs.

So that’s what I did: I just wrote some new stuff. For instance, “Armando’s Rhumba” I recorded a number of times, and the version on this recording hardly states the melody at all. It’s just some other phrases. So for me it’s a pretty fresh look at the older material.

In places – for example, during some of the piano-focused parts of “Duende” – some of the music on the new album reminds me as much of contemporary classical music as it does Latin jazz …

With this album, even though it has that sort of explicit Latin thematic foundation, did you consciously endeavor to push outside what people might consider the boundaries of that style?

My ideal kind of musician who I work with is someone who, like me, has affinity for all kinds of music: classical music, jazz music, pop music, rock, Latin … everything. And the musicians in the new band are exactly like that. They have a very, very wide range of performance. Like Michael Rodriguez, for instance, my trumpeter, he can play anything. He’s a great improviser. He gets a warm, beautiful sound. When I write a melody, for instance, he – actually, anybody in the group will do this – but he’ll take the melody and put the right personal interpretation on it. He’ll know what to do with it. 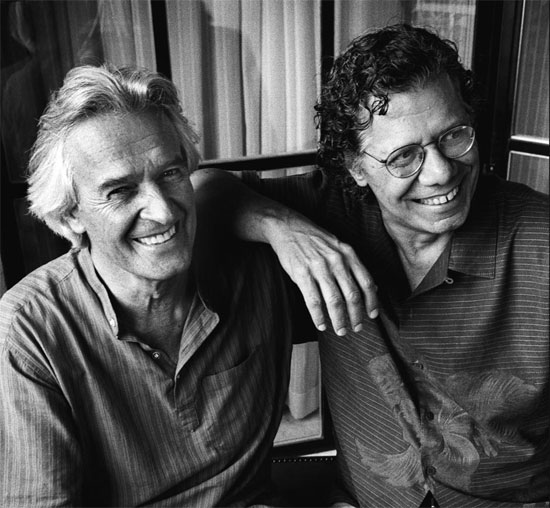 As opposed to Miles Davis, who seemed to move from one style to the next, you’ve not been afraid to dip back into styles in which you worked previously. And when you do, you always bring something new to the conversation. Do you think that’s a fair characterization of your work in general?

Yeah, sure. I mean, I’ve never had any particular thing about music as a point in time. Like, the ’20s music, the ’30s music, 1800s music, contemporary music … whatever that means. All of these things that have time attached to them, they’re all kind of literal. Every time we perform, whether you’re performing something that Mozart composed in the 1700s or if you’re improvising something new on the spot, it’s right now that you’re doing it. Now is the communication, now is what you’re trying to reach whoever you’re playing with and for. So I’ll use anything. Anything that works.

One of the things that certainly worked was some of the pioneering fusion work that you did, working with Miles, Larry Coryell and others. In what ways, if any, do you think that your work from that period informs what you do today?

I don’t think about it sort of in those terms. I don’t know; you’d have to point out specific things. Like, for instance, I still use some of those sounds, but they’re new again. Like, in the old days, I used the Minimoog. Today I use a Moog instrument called the Voyager, which sounds very similar. But there are new recording techniques and new ways of using it. As I go through life, like everyone else, you pick up techniques and experiences. And a new era of time comes, and there you are with everything that you are.

I’d like to hang on to the fusion topic for a moment longer. I’m interested to know your perspective today, with the benefit of some years’ hindsight. Do you think that as a genre or a subgenre, jazz fusion went as far as it go? Was it inevitably a blind alley, or do you think that there are still things left to be said within that idiom?

I don’t think we’d make much progress trying to answer that, because it’s too general. The basic truth is spoken when you make your utterance musically in present time; there’s your audience, and you play what you play. And once you try to start to name it – “This is Latin music,” or, “This is some fusion combined with paprika and a ribeye steak” – once you try to describe the music in words, you lose it. Because it is what it is.

You listen to the new recording, and there would be a million ways of describing what you’re hearing, depending on your own personal experience. Call it fusion, this, that … there’s a little bit of rock beats. “This drummer sounds like Tony Williams combined with Willie Bobo.” You can make so many different comments about it, but the truth of it is, is what it is, and that’s what it is.

When we discuss the subject of what to call music, I point out that when you sit and talk with other musicians who are making the music, we hardly ever use those terms. Like, when I talk to Carlitos [Del Puerto], my bassist, when I’m trying to describe a feeling that I want, I say, “Could you loosen that up?” or “could you play it tighter?” Or the Latin guys, they like to use names of dances. They say, “Can you make it more like a tango?” I never know what they’re talking about, but when they play the rhythm for me, then I go, “Oh, I see. More like that.” You see? And then Carlitos will play the rhythm one way and call it a tango, and then another guy will say, “Yeah, it’s like a tango like this,” he’ll play it another way completely and call it the same tango.

You can talk about music any way you want, but it doesn’t really tell the story until you listen to the music. Then you see what the emotion is and what the effect is.