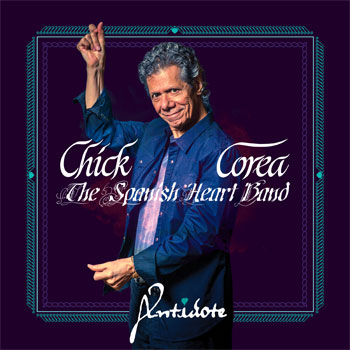 Keyboardist Chick Corea is a giant in the jazz world. Composer of several tunes now considered standards, he has also been a key figure in the pioneering field of jazz fusion. His work with his ’70s band Return to Forever stands alongside work by Miles Davis, John McLaughlin and Larry Coryell – many of whom he has collaborated with – is an exemplar of fusion. But Boston-born Corea has always been about much more than one style of music. Early on, he became deeply immersed in Latin musical traditions, and those influences permeate his work. Corea’s latest album, Antidote, revisits some of his earlier work, putting a new spin on classic tunes. There’s plenty of new music on the album as well; at age 78, Chick Corea still has plenty to say musically.

Your new group, The Spanish Heart Band, takes its name from your 1976 LP, My Spanish Heart. In what ways do you think the new band follows on from the approach you used on that recording back in the 70s? And in what ways, beyond personnel, is it different?

The new project was really inspired just by my [lifelong] love for Latino, Afro-Cuban and Spanish music, but it came from a plan to do a tour, really. The first idea was to do something special for this summer’s festivals in Europe, and I thought of the idea that some older bands take the spirit of a recording; they go out and tour on the recording. This is a little different, because I’m not playing all the music from the old record. It’s a compilation of some new music and some brand new arrangements of some of the older songs. But as soon as I had this great band ready to go, I thought, “We should make a record!” And so, that’s when I decided to make the arrangements early enough in the year to get a record released for the summer tour.

Beyond your ethnic heritage, what do you think it is about Spanish and Latin musical traditions that resonate so strongly with you?

I grew up with it. In my early days, when I was in high school, my first contact with that kind of music was with a local band in Boston. A Portuguese fellow named Phil Barboza played the trumpet and he had a quartet with timbales and congas. He used to play dances. I got introduced to the young conga player at that time; his name was Bill Fitch. And Bill really introduced me to those kind of rhythms and taught me some things about how to make accompaniments on the piano.

And that was my first introduction. The thing I loved about it was that it kind of extroverted me because the music was for dancing. Before that, my jazz interests were kind of serious music. Charlie Parker, Dizzy Gillespie, Bud Powell, and that kind of music was more for listening, and this music was for dancing and extroversion. It was a nice complement and a great spirit. So, that started me out.

And then, ever since then, I’ve gravitated toward the Afro-Cuban, Latino, Spanish and flamenco cultures, and I have got to know and play with a lot of great musicians in that music.

Antidote’s title track is, I understand, a response to the divisive issues that separate humanity. Would you care to comment on what sort of specific issues you had in mind when you put that piece together?

Well, it’s not hard to observe that the world can be a turbulent place. The thing that is basic nature to every individual is creative imagination and aesthetic sense. So, that’s why music and the arts communicate the way they do. They kind of bring people back to their own native sense and native spirit and inspires them. So, I got this idea: as musicians, we travel around and play concerts and make records, and people listen and derive pleasure and inspiration. The music reminds them of their own creativity, that this activity that we do is kind of an antidote. And it’s tacit agreement, I think, amongst most or all artists that one of the basic spiritual reasons why we continue to do it is that it makes people happy. It makes us happy to create, and it makes other people happy too. So, it’s kind of an antidote. And the record has that kind of expression, because the band I put together definitely has that kind of spirit.

There are of course exceptions, but by definition, within the jazz idiom there’s space for the individual soloists to express themselves. And I’ve often wondered if doing that is more difficult for the vocalist in the ensemble. Presumably, they have to stick closer to a melody that they may have not composed, and they have to sing words they may have not written. Since you feature vocal pieces on the new album, what are your thoughts on that?

When I invited Rubén Blades to sing “Antidote,” he got totally into it. I wrote the first stanza in English. I wrote the original lyrics, and then when he saw the lyrics, he made a transformation/paraphrase of my lyrics and sang a second chorus of the melody in Spanish with his own translation. And then, he went on and took the idea of “Antidote,” and he created a whole other set of improvisations.

We recorded the piece in one take. It was a real improvisation, me and him are trading phrases, and his words and his phrases are all improvised. So he had tremendous latitude and brought a great offering to the mix of the whole band.

Beyond acoustic piano, what keyboards are you playing on the new album?

Chick: Well, all of the basic tracks, aside from–The only time I used an electronic instrument on a basic track was “Desafinado.” I used the Vintage Vibe Rhodes-sounding piano on that. But the rest of the tracks, all of the basic tracks were done on a Yamaha DCFX grand piano. And then, I did some coloring in overdubs using the Moog Voyager. I also sampled my old Rhodes, and Yamaha put it up on their new keyboard, the Montage, so there’s a couple of places where I play the that. But 95% of [what I play on] the record is acoustic piano.