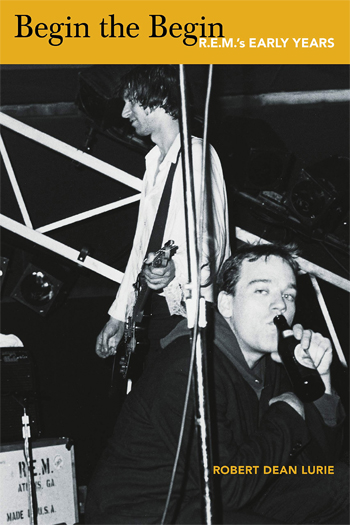 Considering the influence which the group exerted on popular music – most notably in the category once known as “college rock” – it’s remarkable how much little of consequence has been written in book form about R.E.M. Many books have focused on the music scene in Athens, but few dug into the personalities of the group at the center of it all. But then again, the Athens, Georgia-based quartet did tend a bit toward the inscrutable. And since their amicable breakup in 2011, its former members have given few interviews about their music or time together.

Against that backdrop, Robert Dean Lurie’s new book, Begin the Begin: R.E.M.’s Early Years is welcome. Any project that aims to explore the period that (for many fans) is R.E.M.’s most creatively fertile and interesting should find a keen audience.

Lurie doesn’t draw upon any interviews with the story’s principals (Michael Stipe, Peter Buck, Mike Mills and Bill Berry – but he appears to have gone to some length in tracking down old friends, associates and colleagues. Thus, the perspective of Begin the Begin is characterized by their contributions.

The author himself fits into the story as a kind of late-period minor character who was close enough to the band’s orbit to be in a position to make sound judgments about the information he’s eventually given in his research for the book. I’ve read the occasional online comment from a few people who wondered aloud why they weren’t interviewed for the book, and while there may well be merit to those questions, Begin the Begin does a good job of painting a picture of the band’s developmental years. Lurie makes no grandiose claims as to any kind of definitive nature of his book, but the various perspectives provided do weave together to paint a portrait.

There aren’t any earth-shaking revelations in Begin the Begin, though Lurie does drop more than a few asides suggesting that the band members partied a little harder than their reputations might have suggested. The individual members of the band come off pretty much as one familiar with them might expect: Stipe is self-consciously odd; Buck is excitable and occasionally prickly; Mills is a relatively quiet force whose musical role within R.E.M. has always been greater than assumed. Berry’s character is less fleshed-out.

Readers looking for session notes or any kind of analysis as to how the band approached recording its music won’t find a great deal within Lurie’s book. That’s not really its aim; instead the author focuses primarily upon how the band and its members fit into the cast of characters that populate his story. So while it may not satisfy all readers, it remains a completely valid approach.

The book’s subtitle makes clear that it doesn’t get into R.E.M.’s major label era, but it’s still a bit disappointing that the band’s move to Warner Bros. isn’t explored. Instead, Begin the Begin ends somewhat abruptly and enigmatically. To be fair, though, that’s arguably in keeping with the whole R.E.M. aesthetic.