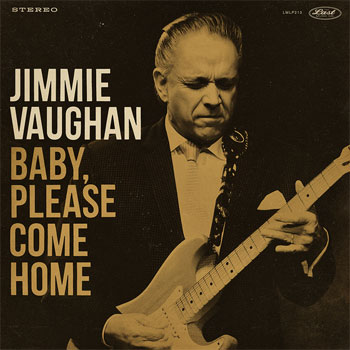 Though he’s been a professional musician for decades – his band opened for Jimi Hendrix in 1969 – Jimmie Vaughan didn’t begin a recording career under his own name until 1994, half a decade after leaving the band he founded, the Fabulous Thunderbirds. Since that time, however, the Stratocaster-wielding blues rock guitarist has released more than a half dozen albums. The first two releases of the current decade were covers collections, and his latest release Baby, Please Come Home continues in that vein. The 11-song album features Vaughan on guitar and vocals, backed by longtime associates George Rains (drums) and bassist Ronnie James. For more than half of the album’s cuts, that trio is expanded, variously adding Hammond organ, piano and/or horns.

The greasy yakety sax on cuts like Willis’ “What’s Your Name?” is emblematic of the style Vaiughan explores on Baby, Please Come Home. It’s steeped in the postwar jump blues and swing of Louis Jordan and Roy Brown. Walker’s “I’m Still in Love with You” is the rare cut in which the band slows it way down; Vaughan shows himself to be a convincing blues crooner. Elsewhere, on tracks like the instrumental workout “Hold It,” Vaughan peels away the extra instruments; the live cut features only him plus drummer Rains and Mike Flanigin sparring on the organ.

Baby, Please Come Home blows by quickly; only two of the tunes break the four-minute mark, and four clock in under three minutes. But quality beats quantity every time, and Jimmie Vaughan seems to be having a good time playing tunes that in all likelihood have been in his record collection – if not his repertoire – for decades.