Home  »  childhood development • interview • new release   »   Rock-a-bye Everybody: The Moon and You and Friends

Rock-a-bye Everybody: The Moon and You and Friends 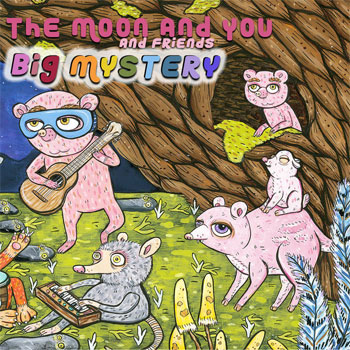 The Moon and You – the Asheville-based wife and husband songwriter duo of Melissa Hyman and Ryan Fursternburg – has released four albums to date. But 2019 marks the addition of something very different to their body of work. Big Mystery, an all-local-star effort led by The Moon and You, is a studio collection of lullabies for young children.

Around the time that Fisher Dolan celebrated his second birthday, his parents’ frustration reached the breaking point. His dad Gene brought his problem to his friend Melissa Hyman. “The music out there for babies is terrible!” he said. “I need you and Ryan to make a good album for babies. Please.”

Hyman says that the timing was perfect. She and husband Ryan Furstenberg “had already been thinking about doing a couple of lullabies, so it really worked out.” With Dolan’s financial support – he’s the project’s Executive Producer – the couple began work on what would become Big Mystery.

Credited to The Moon and You and Friends, the new album builds upon the musical approach of the duo’s previous work, with Furstenberg’s acoustic guitar and Hyman’s cello as key ingredients in the instrumental mix. “We wanted every song on Big Mystery to sound like a dreamscape,” Hyman says. But for this project, they are joined by many of their friends from the Asheville musical community.

“Gene had a list of people whom he had already contacted,” Furstenberg says. “A lot of the guest artists are some of his very favorite Asheville all-stars, and ours too,” Hyman says. “It was so cool to get that list and see how much it overlaps with people who we would always want to work with.”

Hyman says that matching up singers with the songs – mostly originals with a few classics mixed in – was “a fun game. I felt like Stephanie Morgan’s voice would be perfect for ‘Mystery.’ And Laura Blackley on ‘Local Bird’ … that felt like a no-brainer.” Other guests on Big Mystery include two of Hyman’s band mates from Cowboy Judy (Dulci Ellenberger and Amber Sankaran), Marisa Blake, River Whyless’ Daniel Shearin, Piece Edens, Debrissa McKinney, Ross Montsinger and Kevin Williams from Moves, Megan Drollinger, Josh Phillips, Jackson Dulaney and Alyse Baca.

The resulting album presents a variety of vocal styles, but the unifying characteristic is that the songs are designed to appeal to kids while not driving their parents crazy. “Speaking for myself, I’ve always written pretty simple songs,” Hyman says. So some of her existing material lent itself to the lullaby approach.

“We didn’t sweat any of the arrangements,” Furstenberg says. Big Mystery is the third album on which he and Hyman have collaborated with friend and producer Ryan Lassiter. “It was just a continuation of that production process,” he says.

Hyman emphasizes that while making a lullaby album was a departure for The Moon and You, it wasn’t a radical one. “It felt like a nice, simple challenge to make something that just sounded soothing and beautiful and uncomplicated,” she says.

Some artists road-test new material before recording it. Hyman and Furstenberg did that for Big Mystery‘s songs … sort of. “A couple of them were already written for actual babies,” Hyman says with a giggle. “And the babies they were written for seemed to love them.”

But grownups figure into the mix, too. “Gene was rumbling about the lack of music that adults could enjoy as well,” Furstenberg says. “So we tried to make it a lulling album for anyone.”