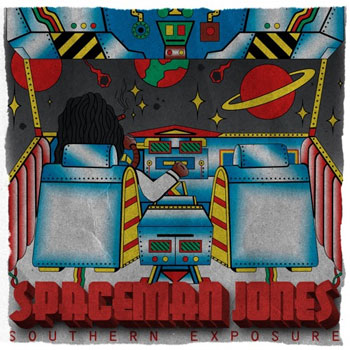 Spaceman Jones is the performing name for Davaion Bristol, the Asheville-based hip-hop artist and radio host. The relentlessly busy artist’s previous releases showcase a heady mix of electronica, trip-hop and rap, and often find him collaborating with others. But on Spaceman Jones’ newest project, the artist ventures off on a solo excursion. Save for a few guest spots, Southern Exposure is a solo project in both name and nature. And though the record contains some sonic elements that provide a kind of connective tissue to his previous work, Southern Exposure is a very different set of music.

A hypnotic forerunner of EDM, the trap subgenre of hip-hop originated in the early ’90s, a few hours’ drive from Asheville. Atlanta-based artists Outkast and Goodie Mob were among the style’s early exponents, making music that established the subgenre’s hallmarks (deep bass drum beats and a sinister ambience among them). Trap’s influence can be detected in more recent works by Beyoncé, Childish Gambino and Cardi B, among many others.

For Southern Exposure, Spaceman Jones follows the style back to its roots. “First on a Friday” has an understated, seething vibe that suggests danger right around the corner. His rhymes are smooth, and he employs the silence between words to excellent effect. The in-praise-of-capitalism “F.O.H.” puts analog synthesizers to work, crafting a rubbery foundation for the laid back yet aggressive number. “Bag” contrasts a sleepy instrumental track with a spirited ensemble vocal. A robotic chorus adds an additional element of impending peril.

“Got One” takes some time to get going, with soaring string-synth lines and a stuttering electronic drum beats (courtesy a classic Roland TR-808 or its modern equivalent, to be sure). Jones’ rhymes twist around corkscrew style, but they never feel forced.

Easily the most musical piece on Southern Exposure, “In a Sea of Freshmen” features a musical bed so tasty and inviting that a vocal isn’t even necessary. Spaceman Jones’ lyric stands in contrast to the soothing backing track. Guitars, saxophones and other traditional instruments flit in and out of the mix, deftly avoiding clashing with the vocal lines.

“Roll One and Turn Down” is set up as a call-and response, set against a loping, somnabulant trap beat. “Spectacular Vernacular” rivals “In a Sea of Freshmen” in its use of musical texture; Spaceman Jones’ rhyming is syncopated, dancing around – but rarely on – the beat, in the manner of a jazz soloist. “We Got the Smoke” is true to the trap aesthetic, but its spooky arrangement calls to mind hip-hop of a very different kind: specifically, it’s reminiscent of “The House,” a brief yet impressive cut from Ice-T’s seminal 1991 opus, OG: Original Gangster.

Throughout Southern Exposure, Spaceman Jones enlists the services of fellow rappers B.E.E.F., Big V, Skipp Whitman, Po’Folk and GPE Ready Red; only three of the album’s eight tracks lack a “feat.” notation. But the album is still a cohesive collection that bears the distinctive musical fingerprints of its creator.