Serving up some good-timing musical nostalgia that hearkens back to a simpler time, Jeff Lynne’s ELO is currently on a major tour of the U.S. An international phenomenon of the 1970s, Electric Light Orchestra landed fifteen of its singles on the Top 40 charts in the United States.

ELO began as a spinoff project of the Move, a band with a cult following in the UK. Originally co-led by Jeff Lynne and guitarist Roy Wood, ELO sought to pick up where the Beatles left off with albums like Sgt. Pepper’s Lonely Hearts Club Band and Magical Mystery Tour. The Beatles had ceased touring by the time of Pepper, and live sound technology of that era wasn’t developed to the point at which the subtleties of that music could be conveyed onstage in the context of a rock concert. 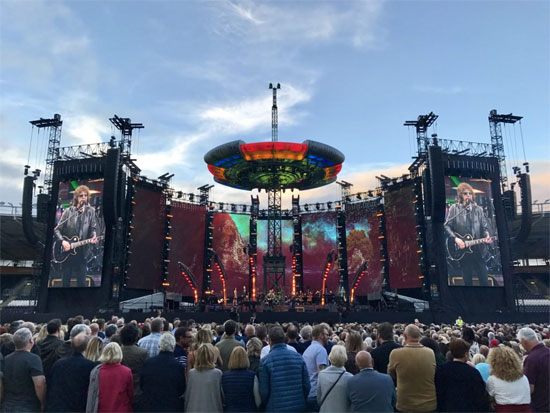 But Lynne and Wood put together a group that featured cellos, violins and advanced synthesizers. While on the band’s debut, 1971’s No Answer, the string parts were played by Wood and painstakingly recorded note-by-note, by the time of 1973’s Electric Light Orchestra II the band’s membership expanded to include cellists and a violinist. (Wood departed to form the even more eclectic and ambitious Wizzard.)

But ELO’s own lofty goals were joined by an equally strong focus on writing catchy, hit-bound songs. While an inspired and incendiary reading of Chuck Berry’s “Roll Over Beethoven” was a centerpiece of the second LP, by the time of On the Third Day (also 1973), the group was scoring Top 40 hit singles with “Showdown” and “Ma-ma-ma Belle.” 1974’s Eldorado was a bigger hit iuin the UK than in America, but its follow-up, Face the Music, featured two more hits (“Evil Woman” and “Strange Magic”).

Meanwhile, ELO’s live performances combined the energy of rock and roll with the intricacy of progressive rock and the spectacle of a Broadway show. And it would be the landmark 1977 album, A New World Record, that sent the band to the highest reaches of rock stardom. That album featured three Top 10 hits: “Livin’ Thing,” “Rockaria!” and “Telephone Line.” A deep album cut, the hard-rocking “Do Ya” was a re-recording of an old Move tune; ELO’s version became a staple of FM radio.

A sprawling double LP, 1977’s Out of the Blue built on the band’s success. The record went Platinum in three countries, and spawned four singles – “Turn to Stone,” “Mr. Blue Sky,” Wild West Hero” and “Sweet Talkin’ Woman” – that made it to the Top 20. The tour in support of the album featured a massive stage built to look like a spaceship; it opened to reveal the band inside (some concertgoers thought the stage looked more like a hamburger bun.)

Surprisingly, by the time of the band’s next release (1979’s Discovery), Lynne had dismissed the classical musicians, paring ELO down to a more ordinary quartet. Discovery de-emphasized the orchestral trappings in favor of something less inspired but more radio-ready. Though some long-time fans dismissed the LP (dubbing it Disco Very), it was ELO’s best seller yet, spawning no less than five hit singles. 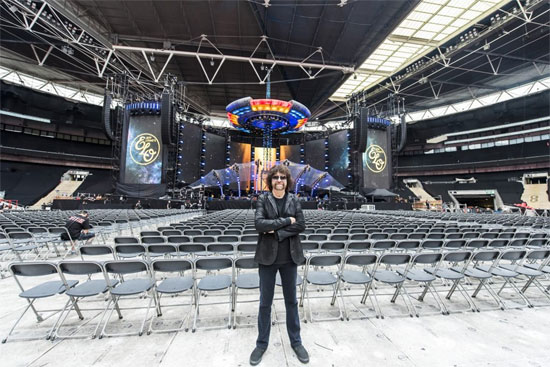 All along, ELO continued as if punk and new wave had never happened. The band began to run out of critical and commercial steam; the hits kept coming (“Hold on Tight” was a late-period smash), but each successive album yielded diminishing returns. After 1986’s Balance of Power, Lynne pulled the plug, and the light went out. He went into production work, lending his impressive skills to Tom Petty and George Harrison. Lynne joined both in the Traveling Wilburys, and he produced sessions in which the surviving Beatles finished demo tracks (“Free as a Bird,” “Real Love”) left behind by the late John Lennon.

Lynne’s attempt to relaunch ELO in 2001 – with only Tandy from the classic lineup – came to little, but in 2015 Lynne revived the brand (now called Jeff Lynne’s ELO), releasing the well-received Alone in the Universe. Though that record is essentially a Lynne solo release, Lynne’s touring band has classical players back in tow, and ELO does some concerts joined by a full orchestra. Nearly 50 years after its start, the spirit of Electric Light Orchestra’s heyday comes through in the lively, hit-filled concerts.