One of Western North Carolina’s most popular music venues, the Grey Eagle is taking a well-deserved victory lap this year. In celebration of the hall’s 25th anniversary, the Grey Eagle recently hosted a music festival. Too big and varied an event to fit inside the roughly 550-person capacity of the venue, Grey Eagle 25 took place outdoors at nearby Lake Eden. With a lineup that included artists key in the Grey Eagle’s history – Unknown Hinson, James McMurtry, Of Montreal and the Budos Band to name just a few – it focused on the present and future. And on the occasion of the venue’s anniversary, owners and managers past and present take a look back at the history of the beloved music hall. 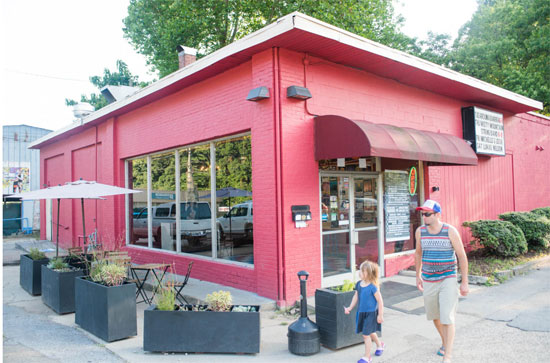 Dawn of the Grey Eagle
In 1997, Tyler Richardson moved from Georgia to Black Mountain; with business partner Dan O’Brien, he bought a live music venue that used the old Cherokee name for the area: Grey Eagle. First opened in 1994 by Edd Konopka, the venue focused on local, regional and occasional touring artists; the Grey Eagle Tavern and Music Hall grew in popularity. But they soon lost their lease on the building, so Richardson and new partner Bert Ivey moved the Grey Eagle to a building at the corner of Clingman Avenue and Haywood Road, in a part of town not yet known as the River Arts District.

Jeff Whitworth started working at the Grey Eagle soon after its relocation. “I moved to town because of the Grey Eagle,” he says with visible pride. He first visited the music hall in 1999 to see a show featuring Vic Chesnutt and Kristin Hersh. “It was just such a unique space,” Whitworth says. “It spoke to me right when I walked in the door.”

He noticed that the room had a vibe quite different from other music venues. “I was used to seeing shows in Charleston: crowds going for the bar, and there happens to be a show happening. Whereas in Asheville, that script was totally flipped: people were here for the music.”

Whitworth hung out after the show, getting to know the performers and Richardson. After that evening he describes as a “life-changing experience,” he knew he wanted to work there. Stuck in a pair of dead-end jobs in Charleston (a veterinary technician, Whitworth is “deathly allergic to cats”), he was ready to make a move. “I started bugging Tyler,” he says.

Three months later – and without a new job – Whitworth relocated near Asheville. “I was beating down the door of the Grey Eagle every day for them to hire me,” he recalls with a hearty laugh. “I came in three or four days in a row, just letting them know I wasn’t going away.”

At that point, the Grey Eagle’s staff totaled four or five people. “It was small-time,” Whitworth says. “They were open three nights a week, maybe four on a busy week. Their focus was primarily on singer-songwriters, with the occasional rock or reggae show.” But with the Orange Peel’s 2002 opening still in the future, it was the largest capacity music room in town.

Whitworth showed up early and asked, “You need any help?” Richardson asked him if he could work the door. “I was like, ‘Yeah,’” he says. “And that was the first night of the rest of my life.”

Most nights, Martin Kasun (Ivey’s replacement as co-owner) or Whitworth took tickets at the door, Richardson ran the sound board, and Richardson’s ex-wife tended bar. After about two months, Richardson asked Whitworth if he’d like to run the sound for an open mic night. “Which I had never done before,” he emphasizes. But he learned quickly and soon mastered the gear. “There’s no better way to learn than on open mic nights,” he says. “On-the-fly changeovers, no sound checks.”

The all-hands-on-deck nature of the small staff meant that soon Whitworth was bartending, too. “I did whatever they needed, whenever,” he says.

The Whitworth era
Jeff Whitworth recalls a night in 2004 when he was chatting with Brian Landrum, whose alt-country band Black Eyed Dog had just finished a set. “Tyler came over and asked us, ‘Y’all wanna buy a club?’ Brian and I were like, ‘Yeah, sure,’ jokingly.”

But the conversation had been started. “A month later we were signing paperwork and taking over a lease,” Whitworth says. “I think Tyler had subconsciously been grooming me for that, all along the way.”

He notes that up to that point, a typical night at the Grey Eagle meant “150 people and maybe $500 at the bar.” So once he took over, Whitworth launched a determined effort to widen the venue’s stylistic reach, and to take advantage of what he saw as untapped opportunity. “Asheville wasn’t the destination that it is now, but it’s always been a great ‘router.’” he says. “It’s perfectly positioned between Raleigh, Atlanta, Charlotte and Greenville.”

Initially, Landrum handled the booking of talent. “We’d make joint decisions,” Whitworth says. “We were two younger guys who were more in tune with what was popular at the time, with the current music scene.” He says when they’d book a rock show with a standing-room-only crowd, he’d stop and think, “Man, it could be like this every night.” They started taking risks on the kinds of artists they booked. And more often than not, those risks paid off.

Even when they didn’t pay off financially – as with a show featuring songwriting legends Dan Penn and Spooner Oldham that Whitworth says “sold like 20 tickets” – he says that the experiences were more than worthwhile musically. “Just the two of them on stage … that was a really, really powerful night.” 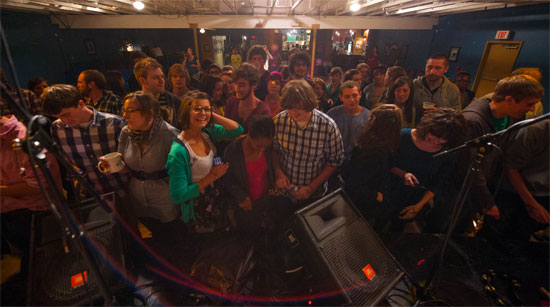 Booking a John Doe show stretched the limits of what the venue could afford, but the well-attended concert featuring the former guitarist of the band X worked out for all concerned. “It was a turning point, Whitworth says. “People would say, ‘That guy was just at the Grey Eagle. It’s not just folk shows any more.’”

And the Grey Eagle made a practice of bringing back artists who put on great shows. “Even if they didn’t do great” in terms ticket sales, Whitworth emphasizes. “That’s developing an act.” One such act was Barbez, a Brooklyn group featuring a Theremin player and a Russian opera singer. “It was weird, weird stuff,” Whitworth laughs. “But we kept booking them. Bob Moog was a fan; he’d roll in and sit front and center for soundcheck.” The Grey Eagle booked Barbez – each time to larger audiences – five or six times.

“They eventually kind of disappeared,” Whitworth says. “But for every one of those, there’s Lumineers or St. Paul and the Broken Bones, bands we helped develop who went on to bigger things.”

Another change that Whitworth and Landrum made was to install an HVAC system, a significant venture considering they didn’t own the building itself. “That was the first thing we did,” Whitworth says.