Carlos Santana: From Woodstock to ‘Supernatural’ to ‘Africa Speaks,’ Making Music with Intention (Part 2 of 2) 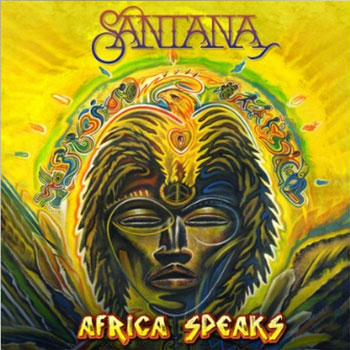 Day of Celebration
Though Santana has scored numerous awards on his own and with his band – ten Grammys, three Latin Grammys – and sold more than 100 million records across the globe, his commercial popularity has had peaks and valleys. Santana was well into the latter in the late 1990s; it looked as if his salad days were behind him; that perspective was underscored by his winning a kind of lifetime achievement award in 1998, induction into the Rock and Roll Hall of Fame. “Usually,” he says with a laugh, “when they give you that award, it’s over for you.”

Not long after the ceremony, the guitarist was approached by industry mogul Clive Davis; the executive – then the head of Arista Records – suggested that Santana collaborate with a range of current hot artists. The result was the juggernaut Supernatural album, with “Smooth” (sung by Matchbox 20 vocalist Rob Thomas) at its center.

The seemingly unlikely roster of artists who worked with Santana on Supernatural reads like a who’s who of 20th century fin de siècle: Thomas, Dave Matthews, Everlast, Lauryn Hill, CeeLo Green, Eagle-Eye Cherry. The album even included a nod to rock history by way of a collaboration with Santana’s musical peer, guitarist Eric Clapton.

“I didn’t have anything except gratitude and deep appreciation for Clive Davis and the connection that he has with other incredible artists,” Santana says. “They didn’t need to be convinced; he just said my name and they wanted to do it.”

With Supernatural‘s 20th anniversary in June of this year, it would seem that a victory lap in the form of a retrospective tour would be in order. Instead, the creatively restless Santana is observing the ’99 album within the context of a tour that presents his newest material as well. Both “Candomble Cumbele” and “Breaking Down the Door” from Africa Speaks show up often in the band’s set. 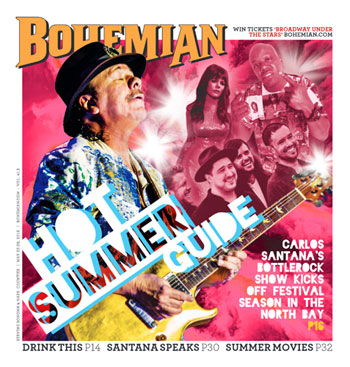 A collaborative and intentional spirit

One of the enduring qualities that ties together every project with which Carlos Santana has engaged is intention. At the height of Santana’s successful run of albums (Santana, Abraxas and Santana III), he shifted gears and made 1972’s decidedly uncommercial Caravanserai. That album brought in new players and explored Santana’s growing interest in improvisational jazz.

For Santana – who has also made collaborative albums with virtuoso guitarist John McLaughlin, Alice Coltrane and his brother Jorge – all of his work fits together. He brings the same commitment to projects that aren’t destined for the charts as he does to hit singles like “Smooth.”

“The connection between any album that I’ve ever done and will do is passion, emotion, and feelings,” he says. A deeply spiritual man who studied for many years under guru Sri Chimnoy, Santana says that his music “is assigned and designed to take you out of your misery. It’s a frequency of certain elements that makes people feel at home.”

While he can freely quote the great philosophers, Santana instead chooses words from the Godfather of Soul to make his point: “As James Brown said, ‘Jump back and kiss yourself.’” When one does that – literally or metaphorically – “you’re actually validating your light,” Santana says. “You’re celebrating your spirit. That’s what we were born to do. And the only way to uplift someone is to help them be aware of their own light, their own magnificence.”

Bay Area roots
The first group to bear the guitarist’s name formed in 1966 as the Santana Blues Band. As he chronicles in rich detail in his memoir, Santana’s family had moved from Tijuana to San Francisco, but he stayed behind for a time. Once settled in the Bay Area, he became fully immersed in its burgeoning culture.

In ’66, promoter Bill Graham started booking Santana’s band for local gigs. Graham’s name comes up whenever Santana is asked about his early days in the Bay Area music scene. “He was a supreme maitre’d,” Santana says. “Like my father and mother, he instilled in me how to present myself in a way that I wasn’t going to self-destruct.” He quotes a saying, one that he believes exemplifies Graham’s approach to all his endeavors. “He would say, ‘The water is pure, the flowers are fresh, the apron is clean, the food is delicious. I hope you’re hungry; It’s my pleasure to serve you.’ That was his narrative.”

As Santana’s band grew in popularity, the group became a regular fixture at Graham’s Fillmore West. Before the release of the band’s debut album, Santana also played all over the Bay Area, including dates at the Dream Bowl in Vallejo, San Francisco’s Avalon Ballroom and Winterland and the Santa Clara County Fairgrounds. The band also performed on the campuses of high schools and colleges in San Mateo, San Pablo, Palo Alto, Hayward and San Jose.

Even once his group became a national act, touring the U.S. and beyond, Santana’s connection to the Bay Area endured. Though today he lives in Las Vegas with his wife, percussionist Cindy Blackman Santana, he holds fond memories of his years in the region. After an extended period in Queens – during which he was a follower of Sri Chimnoy – Santana moved with his first wife Deborah to Aptos. “It was time to start a family,” he says. “And that house in Aptos became like a nest.” The couple’s first of three children, Salvador, was born during their time there. “I’m very grateful and very clear about what each place that I have lived has given us,” Santana says. 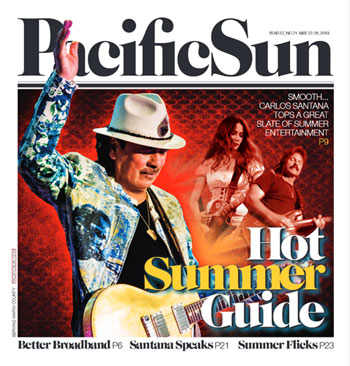 Another Woodstock?
At press time, Santana was on the bill to perform at Woodstock 50, a half century to the day after the band’s original set there. The modern-day event’s future is in serious doubt, and it’s not at all clear if Woodstock 50 will even happen. True to form, Carlos Santana brings a mixture of mindfulness and intention to the question of whether a revival of the iconic festival is even a good idea.

Santana says that those who came to the first Woodstock with the right intentions are still here. “We’re singing the same songs, differently. We reinvent ourselves, but the song is unity and harmony and healing and coming together and doing away, eventually, with patriotism, which is prehistoric. Anything that has to do with walls and patriotism and arrogance about ‘we’re number one,’ that’s a division between ego and spirit. With spirit, we’re all one.

“Woodstock – the real Woodstock – is the opposite of fear and greed,” Santana says. And if that makes him sound like a hippie, he doesn’t mind. “Not a fake hippie with fake mustaches, fake wigs, and phony values,” he says. “Not that hippie; the real hippie.” To him, that includes figures who “care for the environment, who want equality, fairness, and justice. Dolores Huerta, Cesar Chavez, the Black Panthers; those kind of hippies.”

For Carlos Santana, making music with intention is part of that mix, a vehicle to achieve those hippie goals. “It’s an art,” he says. “We do this so we can do that.”