Amanda Anne Platt & the Honeycutters: Get What You Need 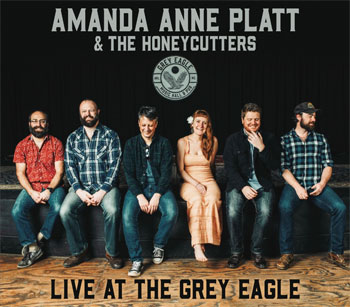 Amanda Anne Platt launched her recording career with 2009’s Irene. A decade later – after countless live shows and three more albums of original material – she’s ready to revisit some of the songs on her debut release. “I wanted [Live at the Grey Eagle] to be kind of a career survey,” she says. “I like that term. There are a few songs on it that we don’t do very often in our live set, but we keep most of the old stuff alive.” She says that the band is sometimes ready to pull something out of its back catalog if it’s requested. And that mindset helped determine the set list for shows at Asheville’s Grey Eagle, recorded on two consecutive nights last November. “I had actually done a little survey on Facebook about what people wanted to hear on that album,” Platt says. “So I tried to represent that as best I could.”

Now a decade older and presumably wiser, Platt nonetheless says that she still recognizes the young songwriter who wrote songs like “Better Woman” from Irene and “Getting Good at Waiting” from 2012’s When Bitter Met Sweet. “I still find more meaning from a lot of the songs that I wrote when I was in my late teens and early 20s,” she says. “Every time I sing them, I’m like, ‘Oh, yeah. I didn’t even …”

Platt does concede that today the songs don’t all sound exactly the way they might have ten years ago. “There are definitely little differences in instrumentation, just as the band has grown and changed a little bit,” she says. “But above all, I’ve just gotten more comfortable in my voice. I don’t sound like such a shaky kid.”

Live at the Grey Eagle isn’t just a “greatest hits onstage” collection; the Honeycutters serve up three previously unreleased songs. “’18 Wheels,’ ‘The Low Road’ and ‘Holy Wall’ are all brand new,” Platt says. And the band reinvents some older songs – “Carolina,” from its 2015 album Me Oh My for example – giving them new and different arrangements. And though the live recording showcases Platt’s heartfelt, classic country-influenced songwriting, a pair of left-field covers make the album an even more varied set.

Platt says that the Bee Gees’ “To Love Somebody” – a hit single from the Gibb brothers’ pre-disco days – is “a song that we had been covering on the road a lot last year. It just felt like something I wanted to record because I like singing it. And the band appends its reading of Platt’s “Diamond in the Rough” (originally on the group’s self-titled 2017 album) with a cover of the Rolling Stones’ “You Can’t Always Get What You Want.”

Platt explains how the medley came about. “The first time I ever played ‘Diamond in the Rough’ for my buddy Kevin Smith, he started poking fun at me, because the chords are basically the same. He said, ‘You know what you gotta do…’ But for a long time we didn’t do it.”

The occasion of recording the Honeycutters’ first live album seemed like a perfect opportunity. “You can’t do it better than the Stones,” Platt admits, “but it’s kind of funny: ‘Here’s the same chords!’ It’s a fun thing to do.”

The Honeycutters are hometown music scene boosters; as the group tours, other acts associated with Asheville are often booked as openers; locals Tina and Her Pony, Zoe & Cloyd and Pierce Edens are on bills with the band this summer. And for several years now, touring is a big part of what it means to be Amanda Anne Platt & the Honeycutters. The live album gives listeners at home a taste of that.

As enjoyable as the band’s previous albums are, Live at the Grey Eagle manages to document something that a studio recording can’t capture: the musicians’ rapport with the audience. “Whatever all the crazy, stressful, annoying parts of doing music for a living are,” Platt says, “it’s still a privilege to get to do that. And I remind myself before each show: ‘I chose to be here. I’m glad to be here. This is what I love to do.’”