Home  »  interview • live shows   »   Every Sound There Is: Asheville Music School Takes on the Beatles’ ‘Revolver’

Every Sound There Is: Asheville Music School Takes on the Beatles’ ‘Revolver’

Created in the space of just over six years, the Beatles’ body of work ranks among the most important and influential music ever made. And for the fourth year in a row, teachers, friends and students of Asheville Music School come together to present a benefit concert, performing one of those albums start to finish. AMS presented the Beatles’ Revolver in concert at Isis Music Hall on Thursday, May 2.

Because Revolver is such an eclectic and deeply textured album, additional musicians are necessary on some tracks. The original version of Paul McCartney’s “Eleanor Rigby” doesn’t, in fact, feature any Beatles instrumentation; a string octet arranged and conducted by producer George Martin performs the music on the Revolver track. The AMS benefit show would re-create that ensemble – four violins, two cellos and two violas – with local musicians, including students Ruby Carlson and Jayhawk Reese-Julien. 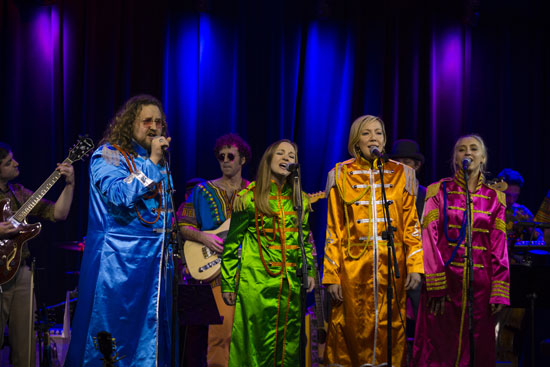 Similarly, the soul pastiche “Got to Get You Into My Life” – another McCartney number – would feature a five-person horn section, again following the original recording. That group features two students, trumpeter Toby Schuetze and saxophonist Julia Steininger. “We happen to have some really talented students who are up to the challenge of playing Beatles music,” Reardon says.

Alan Civil’s French horn solo on Revolver’s “For No One” would be approached in a slightly different manner. On a break between tours with Michael Bublé, Asheville musician Justin Ray played the solo on flugelhorn.

Mounting a complete album performance is a challenge for any group. This year marks the fourth time an AMS benefit show has centered around a Beatles record. “The first one we did was Abbey Road,” Reardon recalls. “And it kept growing from there: ‘What else is really good?’” For their second annual album concert, they tackled Magical Mystery Tour. “There are tons of horns and strings on that record, so we could get even more students and more teachers up there and have a 25-piece band,” he says.

1967’s Sgt. Pepper’s Lonely Hearts Club Band was an obvious choice for last year’s show. “We thought, ‘we did Magical Mystery Tour, so how could we not do Sgt. Pepper?’” Reardon says. Revolver from 1966 made sense as well. “It’s the perfect middle ground between the Beatles’ early instrumentation and Sgt. Pepper,” Reardon says.

Revolver is often thought of as the first Beatles album to make use of the recording studio as an instrument. The album’s innovative, experimental nature is evident on tracks as varied as the singalong “Yellow Submarine” and the droning, psychedelic “Tomorrow Never Knows,” a John Lennon composition. And one of three George Harrison songs on the LP, “Love You To” makes extensive use of Indian instruments like tambura, sitar and tabla.

The technology didn’t exist in 1966 to present that kind of complexity onstage at a rock concert, and the Beatles – who ended public performance with an August 1996 set at San Francisco’s Candlestick Park – didn’t even try. In fact none of the Revolver songs would ever be played live onstage by the group. The Asheville musicians will make use of modern technology to bring those textures and sounds to the stage. “The reverse guitar on ‘I’m Only Sleeping’ is tricky, too,” Reardon says. “But Alec has got it really dialed in; he’s found a new pedal that’s going to help with that.”

Proceeds from the benefit concert go toward keeping studio space rental costs affordable for the teachers. “One of our big goals is for these teachers to be able to make a living teaching music,” Reardon says. Funds also support student scholarships and ongoing programs like AMS band trips to perform for organizations like Blue Ridge Home and ABCCM’s Veterans Restorations Quarters. Last year’s event raised $22,000; this year’s goal is $25,000.

Reardon sums up the enduring appeal of the Beatles’ music with an example close to home. “A parent at the music school was saying that he’ll listen to his son’s music [choices] sometimes, like when they’re in the car,” he says. “It’s pretty eclectic; there’s modern music, but he says that there’s always some Beatles on the playlist. And I think that’s a testament to the fact that the Beatles were always dedicated to their art and craft, especially starting with Revolver. They could have made the same [kind of] record over and over, but they didn’t; they went the other way. And it shows. And like any great art, it’s stood the test of time.”