Eric Gales: Beyond the Blues

A respected electric blues guitarist who first made a name for himself almost three decades ago, Eric Gales has cultivated a career that pushes well past the boundaries of the blues. Once lauded for his technical capability on his instrument, today Gales has a more nuanced approach that shows the depth of his talent and creativity. He’s currently touring in support of his 16th studio album, The Bookends. 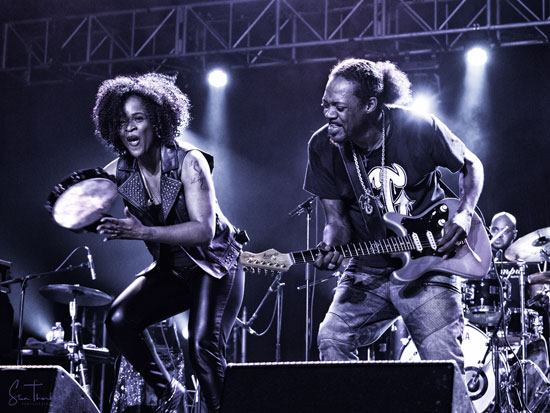 Blues can be a creatively constricting idiom for some musicians; they operate within the rigid parameters of the form, creating enjoyable but not especially groundbreaking music. But from an early age, Eric Gales’ exposure to a wider variety of music meant that even when he started playing guitar at age four, his developing style drew upon all sorts of music. “I grew up listening to all kinds of music,” Gales says. His older brothers – musicians themselves – introduced him to blues, rock, jazz, gospel, folk and country. “My brothers were playing everything around the house,” he says. “I would soak it in, and it definitely made an impact.”

Aside from the most obvious influences upon his style – Albert, B.B. and Freddie King, Jimi Hendrix – Gales says that he learned a lot from the musicianship of country guitarists Jerry Reed and Chet Atkins as well as jazz giants Wes Montgomery and Kenny Burrell.

Gales doesn’t consciously alter his approach when he’s playing a song that’s outside the blues idiom; it’s a more natural process. “I just hear what’s in front of me and automatically get in that position,” he says. “It’s no really big thought process. I feel where the music is going and I follow it. And in between following it, there will be other ‘pit stops’ that I’ll make on my own. There’s no really preparation for it.”

Like most of Gales’ albums, his early 2000s releases received positive critical notices. But more than a few critics identified a tendency for the guitarist to overplay. Displaying candor and self-awareness, Gales doesn’t dispute that characterization. Instead, he offers an explanation. “I was with Shrapnel, which is a guitar-oriented label,” he says. “And I was produced by a predominantly guitar-infatuated producer. So of course they would encourage me to play more than less.”

But Gales still stands behind those recordings. “At the end of the day, I’m still not upset with how [the music] came out. It came out as it was supposed to.” His playing today is still full of fire, but it’s noticeably more mature. “I guess I’ve got a more reserved approach about things now,” he offers.

Looking back upon his career so far, Gales can identify a specific point at which he feels his style became distinctive, more than the sum total of his influences. He points to 2000’s That’s What I Am as the turning point, and critics tended to agree. Allmusic’s Liana Jones calls the album “fresh, exciting and hip,” words not often used to describe blues albums.

But Gales considers himself a work in progress, suggesting that at least three albums released after That’s What I Am represent significant development as well. “And you know what?” he says. “I believe it has happened again on The Bookends.

Having cut an all-instrumental set (2013’s Ghost Notes), for The Bookends Gales decided to focus on song craft and vocals. “I want the world to know that there’s far to me than just the ‘blues rock guitar player’ label,” he says. The album includes several tracks featuring guest artists; a highlight is Gales’ duet with blues powerhouse Beth Hart, a reading of the Beatles’ “With a Little Help from My Friends” that builds upon Joe Cocker’s 1969 arrangement.

Gales acknowledges the talent of select artists with whom he has worked. He singles out Asheville bassist Cody Wright – with whom he has toure extensively – for special praise. “He’s an amazing player, and I think he’s going to go very far,” Gales says. Wright even subbed for Gales’ regular bassist at a recent perfomrance.

Eric Gales has come quite far himself. After a promising start, the guitarist began an extended struggle with addiction. Today’s he’s clean and sober, and he’s convinced it shows in his music. “If you had no idea of my back story and you just saw my show, I think you could sense for yourself, ‘This guy has been through some things.”

He says having a clear head has opened him up musically. “The end result,” Gales concludes, “is somebody standing there saying, ‘Wow, I don’t know what I just saw, but it was very moving.’”