Make Someone Happy: A Conversation with Tony Bennett 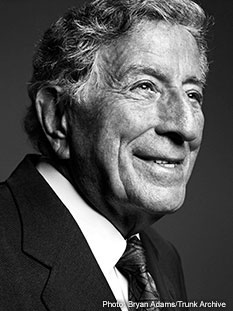 Tony Bennett needs no introduction, so we won’t give him one. Here’s a recent Q&A with the acclaimed singer, now in his 93rd year.

In recent years you’ve done highly successful collaborations with Lady Gaga and Diana Krall. If you had the ability to go back in time and work with someone you didn’t get to before, who would you choose, and why?

Although I had the chance to do a television taping back in the 50s, I would have loved to have had the opportunity to record a duet record with Louis Armstrong. He lived in Queens – not too far from where I grew up in Astoria – so I would visit him at his home. But I never got a chance to make an album with him.

Louis really taught all of us how to sing, and I think his influence on vocalists – not only on how to communicate a song but entertain an audience – is ongoing and immeasurable. He remains one of my absolute favorite entertainers of all time. When I would see him at his house he would say I was “just another kid from the neighborhood.”

If you look back over your career, do you see any missed opportunities or mistakes?

I try not to look back too much, as I like to keep moving forward in a positive way. But of course many mistakes are made along the way, and in the end you learn more from them than the things that go right from the start.

One regret I do have was passing on the chance to sing with Billie Holiday at the Apollo Theatre. She was performing at a gala at which I was attending and after the show she came over to me and she said that she was heading over to the Apollo and invited me to join her on stage. I was with a group of friends at this event, and in the moment made the decision that I couldn’t leave, and declined. That was a missed opportunity of the highest order, and it’s one of the few regrets I have looking back.

What new/current artists do you listen to?

Lady Gaga. She has such appreciation for the legacy of music that has come before her, and yet she makes it her own even when she is performing a standard from decades ago. I think it is that quality that will ensure that she has a long career.

Over the course of your career, what do you see as the biggest change that occurred in the pop music world, and how did it affect your own musical direction?

There was a big change for me in the late 1960s when rock music came in and took over radio. I was encouraged to abandon the Great American Songbook, so I chose to take a break. I moved to London for a few years and got to tour with Lena Horne, and then when I came back to the States I made the records with Bill Evans. Critics always tell me [those albums] are their favorites, so what seemed like a down period in my career really was an important time for me.

And then a few years later my son Danny (who has been managing me for decades) started showing me the videos on MTV which was all new at that time. I found them very creative, which then led to my association with MTV and doing the MTV Unplugged album. It was perfect timing, as it was also the start of people discovering music on the internet rather than just accepting the music that was on the radio. So all of a sudden, people were being exposed to all kinds of music and it really opened things up for a new appreciation of jazz, classical and the popular standard.

And that was all I needed to want to keep going as long as I could, to sing these songs that I love and present them to new generations of listeners. And that was the premise of the duets recordings: I knew that if I sang these songs with contemporary artists, then their fans would catch on to this music. It’s hard to believe that the MTV generation are parents and grandparents now!

Decades from now when people look back at you and your work, how would you like to be remembered?

I grew up in the Depression; my dad passed away when I was very young, and my mom was left a widow with three young children to raise on her own. My Italian-American family would come over every Sunday to our house to support her, and after a big meal they would gather in a circle and ask my brother, sister and me to perform for them.

My family gave me so much encouragement that it was during those early days that I decided I wanted to be an entertainer and make people happy. That is the premise that I have stuck to all these years; when I get on stage I want to present the audience with the best popular songs I can find and have the best possible musicians on stage with me.