Love is Here to Stay: The Legacy of Tony Bennett

In the history of popular music, Tony Bennett stands tall. His professional singing career can be said to have started at age 13 when he was a singing waiter in New York City’s Queens borough, but it was only after serving in WWII that he landed a recording contract. Bennett’s recording career has seen him cutting more than 70 albums’ worth of pop, jazz and show tunes. Today at age 92 he still tours and records, and his championing of younger artists has helped bring his music to newer generations of fans. 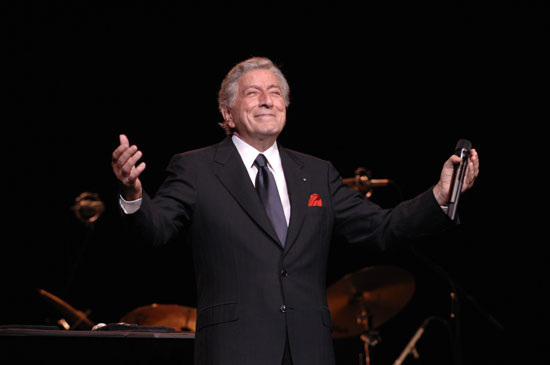 It was several decades into that recording career before Bennett – whose early hits like “I Left My Heart in San Francisco” had earned him a place in the pantheon of popular vocalists – started duetting with much younger singers. His collaborative spirit had already been on rich display through a series of projects with jazz pianist Bill Evans; the two recorded many sessions together, all of which would eventually be compiled and reissued in 2009. Bennett holds dear some advice Evans gave him shortly before the pianist’ 1980 death. “Truth and beauty: that’s what you need to follow,” Evans told the singer. “Nothing else.”

“Bill was such a profound artist,” Bennett says. “His words have fueled me ever since, and I think he was absolutely right. You need to be as honest as you possibly can. But even in the midst of that honesty – which may be dark – you have to find the light, the beauty that is always present in life.”

In Tony Bennett’s music, that beauty takes the form of romantic songs. Whether they’re about heartbreak, loss or the joys of love, Bennett sings in a distinctive yet unaffected style. And while most singers would have long since retired, the nonagenarian vocalist is still going strong: Bennett’s current tour finds him crisscrossing the U.S. for dates in California and the Midwest before heading to England for a pair of performances at the Royal Albert Hall.

Bennett credits a series of breaks that came after his discharge from the Army as key in helping him maintain his singing voice. “I was very fortunate to be able to study at the American Theatre Wing,” he says. “I took all kinds of classes: acting, movement and vocal instruction.” He specifically cites his training in the Bel Canto singing method, one used by many opera singers. “It gave me the foundation I needed right through the years to be able to keep my voice in shape,” he says.

Though Bennett’s type of music fell out of favor during the rock era, by the 1990s his career was once again in full flower. Once the new century began, he cut an acclaimed album with k.d. lang, following it up with Duets: An American Classic. On that Platinum-selling release he was joined by a variety of singers from across the pop music landscape, including the Dixie Chicks, Paul McCartney, Elvis Costello and Stevie Wonder. 2011’s Duets II repeated the formula with similar success. Viva Duets explored a Latin American style.

In 2014 Bennett released one of his most successful albums, Cheek to Cheek, with Lady Gaga. Bennett is effusive in his praise of the singer-actor-songwriter. “When she gets on stage she understands that the audience wants to be entertained,” he says. “That’s why she has so many fans who absolutely adore her. I am one of them.”

More recently, Bennett released yet another collaborative album, this one with Diana Krall; the two first sang together on the Grammy-winning Duets: An American Classic; the new album, 2018’s Love is Here to Stay digs into the Great American Songbook with superb results.

A consummate entertainer, Tony Bennett lives to perform. He says that his goal is to make sure audiences leave his shows saying, “I enjoyed myself tonight.” “That’s how I would like to be remembered,” he says. “As an entertainer who made people feel good.”

Click here for more from my conversation with Tony Bennett.