Mike Mills is best known as the bassist in R.E.M. From the band’s formation in Athens, Georgia in 1980 to its amicable dissolution in 2011, Mills sang backing/harmony vocals (with the occasional lead vocal turn) and co-composed nearly all of the group’s material. R.E.M. released 16 albums of new material (plus some live collections) and is remembered as one of the most important acts in so-called alternative or “college” rock.

Since the band broke up, Mills has remained busy with multiple endeavors. He’s a member of the all-star group The Baseball Project, and has been an enthusiastic and prominent fixture in the series of concerts and events honoring 1970s rock band Big Star. But amid all of his activities, Mills found time to create an orchestral work. 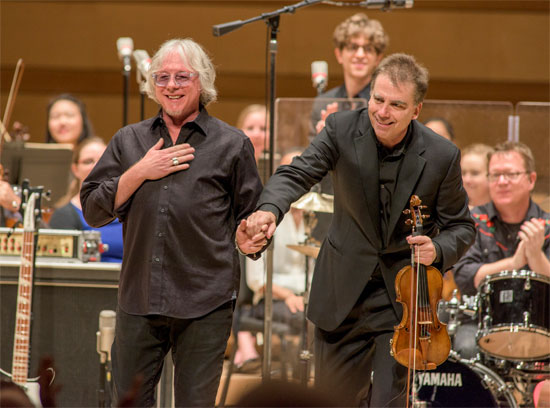 Composed with violin virtuoso and lifelong friend Robert McDuffie, Mills’ Concerto for Violin, Rock Band and String Orchestra succeeds where similar efforts have failed. Combining rock and classical (or at least classical-leaning) music is a path fraught with peril; the results are likely to satisfy neither rock fans nor classical buffs. But Mills’ concerto works precisely because it focuses on melody, harnessing the visceral power of rock ‘n’ roll and the subtlety and grandeur of a large string ensemble.

Mills is characteristically modest about his goals for the work. “I wasn’t trying to operate under any strict definitions,” he says, other than to “feature the virtuosity of the soloist for roughly 30 minutes, which is the definition of a concerto.”

He brought a crowd-pleasing, rock ‘n’ roll mindset to the project: “I didn’t really care about any of the other rules, and I think this is what the audience is responding to,” he says. “I think they are really enjoying the stripping away of convention, and simply enjoying the music.”

A few reviews from the classical press have been mixed, but that doesn’t bother Mills. “When they criticized a couple of aspects of it as not being classical, that was fine with me,” he says. “I wasn’t strictly trying to write a classical piece of music. What Bobby and I are doing here is trying to break down the wall between classical and rock ‘n’ roll, and show people that there are overlaps.”

The Concerto for Violin, Rock Band and String Orchestra debuted in 2016, and to date it has been performed more than two dozen times. And Mills has every intention of continuing. “Bobby and I would like it to be a piece that we could perform for as long as we feel like performing,” he says. The current dates aren’t part of a tour, but rather specific one-off performances in select venues.

In a way, Mills’ concerto is a living thing. “Before the very first performance, my arranger, David Malamut, said, ‘We’ll probably be tinkering with this right up until showtime,” the composer recalls. “And when he said that, I realized that nothing is set in stone. If you think you can make it better, then by all means do so.”

Rock ‘n’ roll pioneer Chuck Berry famously toured without a band, enlisting the backing of “pick-up” musicians whenever he rolled into a town. Mills’ approach for his concerto takes a page from that playbook. While the rock band (featuring Mills on electric bass) and violinist McDuffie are permanent fixtures of the live dates, the string sections feature musicians local to the performance venues. Some dates feature youth orchestras. “We’re trying to bring young people to the classical world by showing them that it is not as alien as they might think,” Mills says.

Mills notes with some pride that the response to his concerto has been “overwhelmingly positive. And that surprised me.” But he admits that before the shows start, some concertgoers remain a bit skeptical. “We performed at Emory [University in Atlanta], and there were several older ladies in the audience,” he says. “My friends heard them say, ‘Well, I don’t know about this. It seems a little … strange.’ But by the end they were dancing, and singing, and clapping along.”