Buzzing About Asheville: Queen Bee and the Honeylovers

Traditionally, concept albums have been almost exclusively within the rock idiom. But Asheville singer and songwriter Whitney Moore has breathed new life into the form by applying it to a very different musical style: jazz. Celebrating the release of the local history-themed Asheville, Moore’s band, Queen Bee and the Honeylovers played a show at Isis Music Hall on Saturday, April 27.

Moore formed Queen Bee and the Honeylovers with double bassist Trevor Stoia in late 2016. From the beginning, the band would focus on early and swing jazz. “This was right after the [presidential] election,” Moore recalls. “And sweet, nostalgic music was very healing and therapeutic in an otherwise dark moment.” 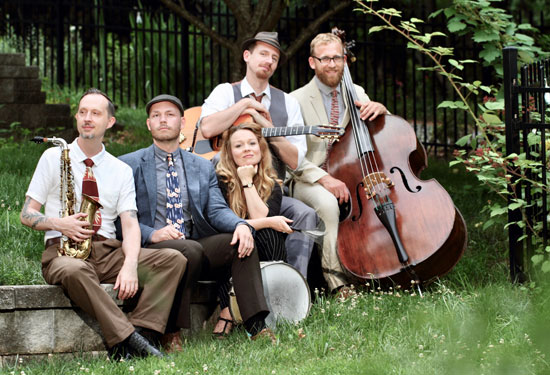 But rather than exclusively playing classics from the pre- and postwar jazz eras, Moore decided to take Queen Bee and the Honeylovers in a different direction. “I love writing, so any project I had was going to have some original music,” she says. “And as we started to write music, I was looking around for inspiration.” She found it close to home.

“I grew up next door to my grandparents; I grew up hearing their stories about old Asheville,” Moore says. “It was very soothing and healing for me to take some of their stories and turn them into songs, and then go even farther down that rabbit hole of researching Asheville history.”

Helped along by a grant from the North Carolina Arts Council, the product of those endeavors is Asheville, a 14-song disc filled with songs whose titles make their inspiration clear to those familiar with the city’s history. “Beacham’s Curve” is a love story set against the backdrop of the streetcar line that used to connect West Asheville with what’s now the River Arts District.

“I love having a project that allows me to immerse myself in the history of this place and of my ancestors in a time where there was so much turmoil out in the world,” Moore says. “I’m reminded that this is just one small moment in the timeline of society, and that our ancestors went through stuff just as bad – if not worse – and they persevered. They worked really hard to get us as far as we are now.”

Moore says that the act of researching and writing lyrics about Asheville’s past helps her put things in perspective. “When you see a map of the universe, we’re this one little speck,” she says. “That’s kind of the same feeling that it gives me to study the history of this place.” And her appreciation of Asheville’s history has colored her perspective on its present and future.

“I see it blowing up,” says the Asheville native. “There’s a new hotel every day; there are people moving here from all over the world. “I’m really glad we have the industry of tourism to keep us alive economically; we need that. And I’m also sad to see the displacement of the communities and culture that was already here. Folks like my family are kind of getting pushed out, so I wanted to preserve some of those stories and keep that old Asheville alive.”

Queen Bee and the Honeylovers aren’t completely immersed in the past; Moore’s historically-based lyrics cover themes that are universal, and many are relevant to present-day Asheville. As the music video for “Beacham’s Curve” makes plain, the song is about a same-sex romance. And while “Logan and Moore” is ostensibly about the Pack Square tailor shop that the Moore’s grandfather ran, its theme is timely as well.

“It’s also a song about the ever-ongoing, forward march of ‘progress’ destroying small businesses and mechanization,” Moore says. Taking a swipe at a recently-defunct chain (while pointing at online retailer Amazon as well), “Logan and Moore” includes the lyric, “Maybe Sears and Roebuck can make it cheaper, but what price can you put on a community’s livelihood?”

The Honeylovers include Stoia, pianist James Posedel, Moore on vocals and snare drum and guitarist Matt Frick. For the album release show, the band will be joined by local jazz notable Russ Wilson on drums and guitarist Steve Karla, both of whom play on the album. The expanded group will also feature violinist Drayton Aldridge of Drayton & the Dreamboats.

And the evening is designed to underscore the historical nature of the music: Conda Painter from the West Asheville History Project’s Conda Painter will give a presentation. And Marla Milling, author of Legends, Secrets and Mysteries of Asheville “is going to come and share some old Asheville stories,” Moore says.

Stories are at the heart of the project. “I try to tell at least two stories at once,” Moore says. “If you’re just gonna tell one story, then you could just say it. But if you want to tell multiple stories at one time, you make art about it.”