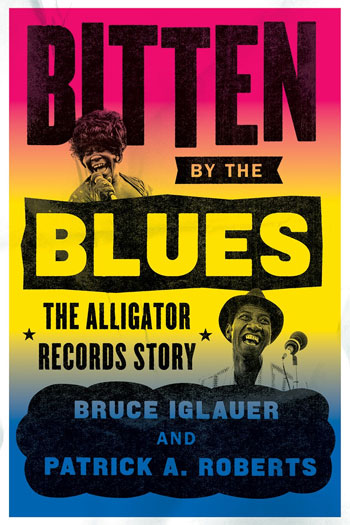 Launched in 1971, Chicago-based indie label Alligator Records would grow to become one of the most significant forces in the commercial revitalization of blues. Founded by Bruce Iglauer (who remains at the label’s helm to this day), Alligator has been at the forefront of support for blues artists old and new. Iglauer’s new memoir, Bitten by the Blues: The Alligator Records Story, reaches back to tell the tale of how the largest independent blues album on the planet came into being and thrived.

Working with co-author Patrick A. Roberts (Give ‘Em Soul, Richard! Race, Radio, and Rhythm and Blues in Chicago), Iglauer recounts his early years as a (self-admitted) failed musician who developed a love and understanding of blues the old-fashioned way: seeing and hearing it performed live. As a young man working for Delmark Records’ Bob Koester, Iglauer had the opportunity — and more importantly, the inclination — to get to know the people who made the music.

After Koester passed on recording a favorite of Iglauer’s he launched his own label, releasing Hound Dog Taylor and the Houserockers. Alligator would go on to release hundreds more albums in the years and decades that followed, deftly weathering changes in the musical marketplace and remaining vital to today.

Iglauer — who somehow also managed to found Living Blues around the same time he started Alligator — tells his story with warmth and candor; for example, he reveals that he turned down Stevie Ray Vaughan. Still, though the label initially focused primarily on American artists of color (Iglauer makes plain his relative disinterest in the white “British blues boom” artists who rose to fame in the ‘60s), by the 1980s, Alligator was enjoying success thanks in no small part to three white artists on its roster: Roy Buchanan, Lonnie Mack and Johnny Winter. Iglauer colorfully recounts the fireworks that sometimes ensued (“[Winter] played a slashing, killer solo instead of killing me,” he writes).

The book brings the Alligator story right up to the present, reporting that not only is Alligator thriving, but Iglauer’s passion for the music — and the business of bringing it to listeners — hasn’t diminished.