As recently as 2015, Ryan Barber was homeless. But through a combination of determination and talent, today the Asheville musician is realizing his life and music goals. The newest release from Ryan RnB Barber – today a ubiquitous presence in the Asheville music scene – is a solo album pointedly titled Rejuvenation. Backed by his band BoogiTherapi, Barber celebrates the album release with an April 19 show at Ben’s Tune Up.

Raised in the tiny mountain town of Wilkesboro, N.C., Barber grew up surrounded by the sounds of Appalachian music. “My grandmother loved bluegrass,” he says. But in the region that would host Merlefest beginning in the late ‘80s, his growing interest in soul, rhythm and blues and funk had to find fulfillment at home. “As long as I can remember, my father and uncle had all these albums of ‘70s and ‘80s funk, disco and R&B,” Barber recalls. “I’m sure that when I was in the womb, that was all they played.” 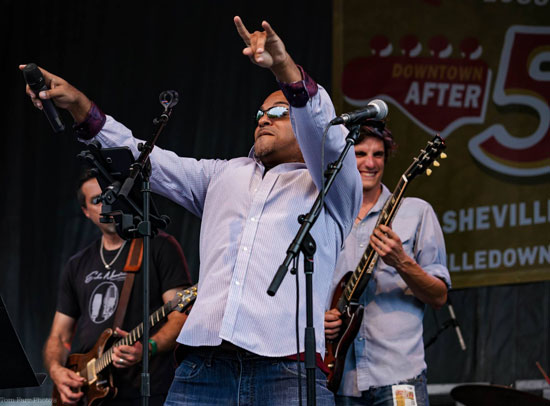 The victim of a hate crime when he was 18, Barber knew he would eventually have to venture beyond the town of less than 3,000 people. “I will never regret my childhood and growing up there, but Wilkesboro is not the place for a young, black individual to move forward in life,” he says.

While still in Wilkes County, he was part of a group, Turbo Pro Project; he describes that outfit as “banjo hip-hop fusion.” The band traveled south to play well-received sets at StellaBlue and the French Broad River Festival; eventually, Barber encouraged his band mates to relocate to Asheville.

But in the end, only he made the move in March 2009. “Everybody else got cold feet,” Barber says with a laugh. “But I’m grateful. Because that was the thing that I needed to warm up my cold feet. I had always wondered, ‘How am I gonna do that? I don’t have any money. I don’t know anybody down there.’ So music was the reason that brought me to Asheville.”

Once settled, Barber took part in some open mic events. But gaining traction in the music scene was a long, slow haul. By 2015, he found himself homeless. “Nothing was working,” he says. “I was doing music, waiting tables and working as a bouncer at a bar.” He felt he had reached a crossroads. “I told myself, ‘I’m gonna give this one more year of doing music, and if it doesn’t happen, then I’m just gonna stop and work a regular job.’”

A friend pushed Barber to attend Asheville Music Hall’s Tuesday Night Funk Jam. He reluctantly agreed. “I can’t remember what song it was, but the crowd just erupted,” he says. “And the band was just like, ‘Yeah, you were awesome! You should come back and do this again.’ It seemed like everything just took off from there.”

Local musicians became aware of Barber, and he started getting calls for gigs. “The rest is history,” he says with a smile. “I’ve been blessed to be able to play with so many different people and meet so many awesome musicians who have welcomed me into their community. They really looked out for me. So yeah, music basically saved my life two years ago.” 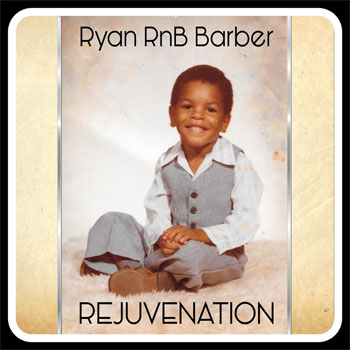 Today Barber is fully consumed with music. He’s a vocal coach, and works as a music instructor at French Broad River Academy. He sings and plays with several bands including Rubberband and Orange Krush. He’s regularly found at the Funk Jam, the AMC Jazz Jam and Salvage Station’s weekly RnB Jam Night. And as part of kid-hop sensation Secret Agent 23 Skidoo’s band, Barber earned his first Grammy award (Best Children’s Album) in 2017 for Infinity Plus One.

But for a time, Barber’s original music took a back seat to his other musical pursuits. “I was focused on trying to keep the bills paid, trying to take care of my family, and all that good stuff,” he says. “I was basically going around doing shows and singing covers just to get by.” But friends and band mates Debrissa McKinney and Secret Agent 23 Skidoo (Barber calls the latter “Cactus”) encouraged him. “They told me, ‘People really need to hear your type of r&b and hip-hop funk right now,’” he says. So Barber redoubled his efforts toward his own music.

Predominantly a one-man record, Rejuvenation is a party disc, with tunes like “Fun Tonight” and “Lay Yo Body Down.” But the disc’s mix of r&b, funk, soul and hip-hop supports a positive, upbeat lyrical perspective that’s often autobiographical in nature. The nine-track set wraps up with its most pointed track, “Perseverance.” Against a forceful funk background, Barber spins the tale of his journey from a Wilkes County kid to a Grammy winning recording artist: “All the doubtin’ and hatin’ motivates me to work harder,” he raps. “You can try but you’ll never be Ryan RnB Barber.”