Rodrigo y Gabriela: Echoes of the Past, Focus on the Present (Part 1)

The music that Mexican acoustic guitar duo Rodrigo y Gabriela make is sometimes characterized as “acoustic speed metal.” The pair’s flamenco-influenced instrumental approach has certainly attracted fans from the metal scene, but Rod y Gab’s style draws from flamenco and classical guitar as much as anything else. They’re not rigid musical Luddites, either; across a superb series of albums – and on worldwide tours – the two guitarists haven’t been afraid to push the boundaries of what’s considered acoustic music. The result is a deeply textured, often high-energy body of work. On April 26, Rodrigo y Gabriela released their sixth studio album, Mettavolution; alongside a clutch of original tracks is an inventive reading of the epic-length Pink Floyd classic, “Echoes.” A tour in support of the new album brings Rodrigo y Gabriela to Atlanta’s Fox Theatre on June 1.

The technical brilliance of guitarists Rodrigo Sánchez and Gabriela Quintero sometimes results in their being labeled as “shredders.” But there’s an important distinction to be made between what they do and the style of others in that category like Yngwie Malmsteen. “Melodies come first,” Sánchez emphasizes. Until recently, the duo employed an established approach to developing songs. “What I’ve done is write the melody,” Sánchez explains, “then Gab adds harmonies, and then together we come up with the structure of the song.” 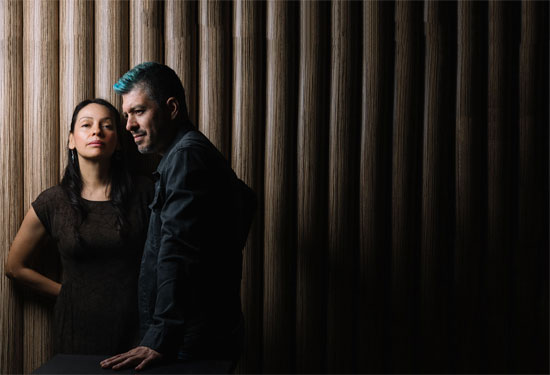 But for the songs on their latest album, Rod y Gab took a slightly different direction: Sánchez composed songs that included vocals and lyrics. In fact there’s a conceptual continuity to the songs. ‘But you guys don’t know it,” he says with a laugh. Because Mettavolution is still an instrumental album. “What we did was record the instrumental versions of those songs,” Sánchez explains. “Not because we don’t want to share the concept, but because we play instrumental music.”

Sánchez believes that the emotional content and ideas within the lyrics come through on the instrumental recordings. “For us, they do,” he says. “When our producer, David Sardy, heard the idea and the way that we worked the songs, he said, ‘Oh my God: now it makes sense.’ And when we tell people about it, they understand; they feel that there is content behind the melodies.”

On the duo’s earlier releases – beginning with re-Foc in 2002 – Rodrigo y Gabriel limited themselves to acoustic instruments. But on Mettavolution they’ve widened their scope. “We use electric guitars, percussion and some synths to give it a little different touch from everything we’ve done before,” Sánchez says. “But it’s still respecting the core of what we are.” Sometimes the sounds on the album suggest other instruments; parts of the album’s title track seem to feature a Hammond B3 organ, but what you’re hearing is actually guitar.

The nylon string guitar isn’t typically thought of as an electric instrument, but in the hands of Rodrigo y Gabriela, it can be. “We started using Fractal [amplifier modeling and effects processor] units,” Sánchez says. “Those units are made for electric guitars, but if you are patient enough and work on the presets with the nylon string guitars, you can come up with your own sounds. That’s what I did for the last three years.”

During that period, Sánchez recorded demos of the songs that would eventually form Mettavolution. And then he brought them to their producer. “David is a geek in terms of having weird equipment; he has a lot of crazy instruments, but he was not really familiar with Fractals,” he says. “So what we did was to try to emulate the Fractal sounds with stuff that he had in his studio.” The duo experimented, using more “organic” effects like a Leslie rotating speaker cabinet, eventually finding the sound textures they wanted. “But now in live situations, we’re going back to the Fractals,” Sánchez says with a laugh. “Because [otherwise] we cannot reproduce everything that we did in the studio!”

He acknowledges that some fans of Rodrigo y Gabriela’s earliest material have resisted the changes the duo has made along the way. “I’m sure that always happens,” Sánchez says. “Especially with the ones who knew our music from day one, they probably prefer the acoustic version.” Pointing out that what they do is still “about 90% acoustic,” he says, “I don’t see anything wrong with us adding effects to acoustic guitars. I mean, it’s even better, because we have now more a chance to create different sounds and different textures in order to keep writing interesting music.

“Whether you like it or not, we need to experiment and come up with new stuff,” he says. “Because otherwise we get bored. And if we get bored, well, we are not going to write music.” 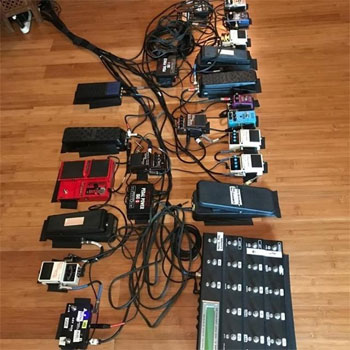 Happily for all concerned, Rodrigo y Gabriel haven’t gotten bored. In fact, they’ve expanded their reach into many new musical areas, applying their unique talents to the world of film soundtracks. They worked with film score composer Hans Zimmer on Pirates of the Caribbean: On Stranger Tides and with Henry Jackman on the Shrek prequel Puss in Boots. Sánchez says that he and Quintero learned much of value from those experiences. “It’s such a different world altogether; we would certainly like to do more.” He says that they have had to turn down some opportunities because of touring commitments.

One lesson learned from film work Sánchez has taken to heart is the value of simplicity. “We feel for the first time that we’ve written simpler music, but with much more personality,” he says. “Sometimes, in the past, I think we wanted to complicate more the structures of the songs; we probably felt that was needed because we didn’t have more [instrumental] elements. And it was a little too complicated sometimes.” He says that the new songs on Mettavolution “have melody and structure that are easier.”

But Sánchez doesn’t believe that the changes in songwriting and arrangement will be a jarring shift for listeners who enjoyed the duo’s 2014 release, 9 Dead Alive. “Most of the material on the previous album and this one kind of align,” he says.

The 18-minute version of “Echoes” is a centerpiece of Mettavolution. Using a mostly acoustic arrangement, Rodrigo y Gabriela put their spin on the lengthy tune while remaining true to the space-rock feel of the original, right down to the impressionistic, musique concrète middle section. Sánchez views the original version – occupying the entire second side of Pink Floyd’s 1971 album Meddle – as a turning point in the British band’s development. “That was the song that gave Floyd the direction we all wanted them to take,” he says. “We’ve been Pink Floyd fans forever, and ‘Echoes’ has always been special to us.”

The path to actually tackling “Echoes” was a long one for the duo. For years, Sánchez says, “we never touched that song.” But nearly a decade ago, while touring in support of the 2009 album 11:11, Rodrigo y Gabriela decided to make a music video for “Hanuman” (a track dedicated to Carlos Santana) based on the look and feel of the film Pink Floyd Live at Pompeii. “And then, since we were kind of familiar, again, with the whole concert, I remember I told Gab, ‘We should work on a version for “Echoes.”’”