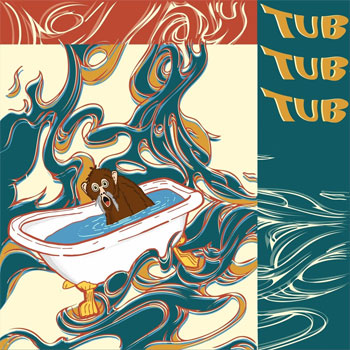 For some listeners, the very thought of improvisational music is an unappetizing prospect. The idea that a musician – or worse yet, the thinking goes, a group of musicians – might begin playing without a specific direction in mind conjures mental images of train wrecks. Not without reason, those sorts of listeners prefer instead music based on melody, harmony, accessibility. Simply put, they want to hear songs.

While there’s certainly validity to that perspective – enjoyment of music, after all, can be a very subjective experience – in truth it’s a false choice. Or, at least, it can be. Some inspired artists can embark upon a musical journey with no fixed destination, creating something tuneful and – gasp! – existing within the confines of what most listeners might consider relatable.

From this reviewer’s perspective, that’s the case with UNCA Session, a new EP from Asheville-based quartet Tub. The group self-identifies as “chaos funk,” and while that somewhat whimsical description suggests just the sort of aural train wreck that scares off some potential listeners, what the group does draws from the melodic side of improvisation.

Like some many musical collectives in the Asheville area, Tub’s personnel features musicians who play (or have played) in other groups as well. Keyboardist Daniel Combs and guitarist Dennis Brumback have both worked with blues/Americana songwriter Ashley Heath; bassist David Murray and drummer Marcus Clonts are two-third of math rock trio Lowercase Numbers.

But Tub doesn’t sound like any of those artists. True, Lowercase Numbers’ demanding material requires a rhythm section that’s technically precise and on a shared wavelength; Tub’s ambitious yet freewheeling instrumental music is similarly challenging, but of a fundamentally different nature.

UNCA Session – recorded in a single session last November at the university’s studio – draws upon improvisational foundation. Two of its three tracks are structured tunes that likely developed out of improv; the third is an audio document of the band’s creative process in action.

The EP opens with “Jangular.” The start-and-stop-on-a-dime approach of progressive rock introduces the piece, but as the track unfolds, it reveals the twin character traits suggested by its title: jangly and angular. With a sleek style that at times suggests the work of Steely Dan, Brumback leans into his guitar soloing, alternating between fleet-fingered runs and longer, sustained notes. Combs is essentially playing a different song at the same time, but because the two musicians are so clearly listening to one another as they play, their musical excursions work as one, alternating between a sort of wordless dialogue and two-trains-running split musical personality. Murray and Clonts are on paths of their own, to be sure, but they hold things together in a way that provides a sonic canvas upon which their band mates can draw. And at its core, “Jangular” is catchy, with signature melodic lines emerging and establishing themselves. As the song drives toward its conclusion, Combs briefly switches from speedy electric piano runs to keening synthesizer lines, then back again.

The tunes get longer as they go along; where “Jangular” clocks in under seven minutes, “Mr. Candelario” extends past eight minutes. The faint buzzing of a guitar amp is joined by tinkling electric piano; the tune soon reveals itself as a kind of highly melodic, laid back soul-fusion in the mold of George Duke or Herbie Hancock. Brumback’s complex chord shadings provide a soothing yet intriguing backdrop for Combs’ old-school keyboard work. And just when the listener settles into the sexy groove – with guitar leads engaging in conversation with synth and Rhodes textures – the band increases the tension. Murray’s bass lines become more intricate, and almost imperceptibly, he and Clonts push the band faster. A lot faster: by the four-minute mark of “Mr. Candelario” the quartet is firing on all cylinders. But they throttle things back, slowing to the point at which one might expect the arrangement to fall apart. Just as that seems inevitable, Brumback fires away on guitar, pulling the band along with him. His sharp chording creates a melody of its own, and the other three musicians ably support him in his endeavor. As the track nears its end, all four players are seemingly acting as one musical organism.

The longest track on the EP, “Improvisation,” is exactly that. Less structured than the tracks that precede it, the nearly 13-minute recording is a bit on the amorphous side. But Tub does itself a service by placing the track last; after listeners have been drawn in with the EP’s first two cuts, they’re likely in a frame of mind that’s more open to the free-form experimentation on display here. Even without a rigid framework, “Improvisation” features plenty of catchy instrumental runs. True to its name, the performance shifts between styles; at times it’s funky, and at other points it’s demanding and inching toward dissonance.

The band’s “recommended if you like” box on the CDBaby UNCA Session page name-checks Phish, but (parts of “Improvisation” notwithstanding) Tub has a much higher melodic quotient – and a considerably less self-indulgent and noodling-oriented approach – than the jam band heroes. The page’s mention of John McLaughlin makes more sense; Tub pairs technical brilliance with a focus on creating something that – while decidedly not danceable – lies well within the domain of tuneful and accessible music.