A new release of little-heard Humble Pie music, Joint Effort documents a strange period in the lifespan of the British hard rock group. Made not long after its lead singer briefly quit and returned, the collection of songs found the four band members contributing to various degrees. Falling somewhere between a proper album and a home recording project, Joint Effort nonetheless expands listeners’ understanding and appreciation of some of the qualities that made Humble Pie special.

From the perspective of British music fans, Humble Pie was a supergroup; its four members all came from previously established bands. Guitarist Peter Frampton had been a member of the Herd, scoring three UK Top 40 singles, two of which cracked the Top 10. As leader and front man of Small Faces, the group best known for “Itchycoo Park” and “Tin Soldier,” Steve Marriott enjoyed a dozen hit singles in the UK. Bassist Greg Ridley had been a member of Spooky Tooth for its first two highly-regarded albums. And while the youngest member of the group, drummer Jerry Shirley, had played in a band—Apostolic Intervention—that only released one single, his powerhouse timekeeping earned the attention of some of the biggest figures in British rock (he played on both of former Pink Floyd guitarist Syd Barrett’s solo LPs). 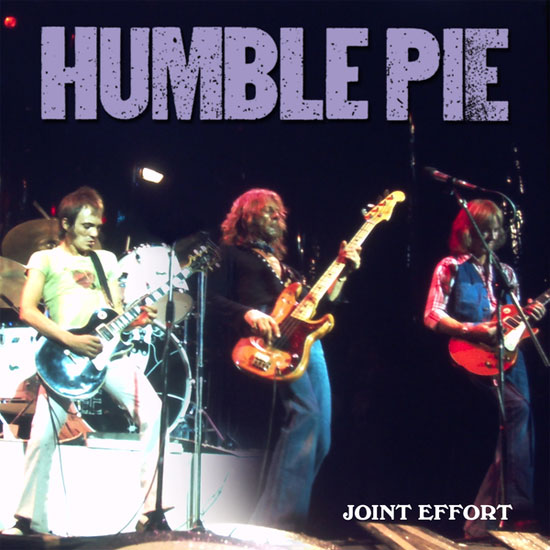 Humble Pie got off to a bit of a slow start; while the debut album (1969’s As Safe as Yesterday Is) reached #32 on the British album charts, the band’s next two full-length releases didn’t chart at all. It’s worth noting, however, that all three records earned positive critical notices. The band hit its stride with 1971’s Performance: Rockin’ the Fillmore, a 2LP document of a successful run at New York City’s famed Fillmore East. Thanks to heavy touring in the U.S. and powerful hit singles like “I Don’t Need No Doctor” and “Hot ‘n’ Nasty,” Humble Pie built a solid stateside following. The band’s brand of bluesy hard rock has worn well over the decades; the landmark Performance has received several reissues, the most notable and comprehensive being a 4CD set released in 2013 by Omnivore Recordings, Performance: Rockin’ the Fillmore — The Complete Recordings.

Customary creative differences and internal dissension made Humble Pie’s lineup a volatile mix. In 1971, Frampton was the first to leave, embarking upon what would eventually unfold as an enormously successful solo career. His position was filled by guitarist Clem Clempson. Marriott, Ridley and Shirley would remain until 1975, but even prior to that, Humble Pie was occasionally in chaos. At one point, lead singer Marriott left, and the band began the process of searching for a replacement.

“Derek Green, head of A&M in England, was aware of the fact that we’d had a bust-up and Steve was potentially ‘on his bike,’ on his way out,” recalls Jerry Shirley. But the drummer, Clempson and Ridley already had a replacement in mind: singer-guitarist Bobby Tench, a highly-regarded journeyman musician who had (among other notable credits) been a member of the Jeff Beck Group.

But when the band members told Green of their choice, “he went pale,” says Shirley with a chuckle. “Poor Derek Green said, ‘No, I don’t think so. That’s not going to work.’” The label head went on to explain to them that he had just signed Tench to a recording deal with a band called Hummingbird, featuring other ex-Beck band mates.

Things got weirder and more frustrating from there. “Bizarrely,” says Shirley, still incredulous at the idea, “our management suggested Billy Joel. In rock ‘n’ roll terms, that’s a bit like suggesting Engelbert Humperdinck! I can’t imagine Humble Pie rocking out on ‘Just the Way You Are.’” The idea was summarily dismissed, and soon thereafter, Marriott returned to the group.

With monies earned from its record deal, Humble Pie had built a proper recording studio of its own in Steve Marriott’s home. It was there that the sessions for what would eventually come to be known as Joint Effort would be recorded in 1974-75. The band had first used its new studio to record its sixth LP, 1973’s Eat It. But there were problems.

“It was a proper 16-track with a Helios desk,” Shirley recalls. “Everything was top notch and cost a fortune. Unfortunately, the mix for Eat It suffered because—bless his heart—Steve was putting too much bass and low end on it.” What sounded perfectly fine on high quality studio reference monitors ended up hopelessly muddy on consumer-grade stereo speakers, and nobody involved recognized the problem. “There was a lot of ‘Peruvian love dust’ flying around at the time,” Shirley acknowledges.

The mix would be corrected on subsequent pressings of Eat It, and the band learned from its technical mistakes when making its next LP, Thunderbox. But other complications were causing difficulties. “We were still playing great, and we were still getting along great,” Shirley emphasizes. “But we were falling foul to our vices; cocaine was doing our thinking for us.” As a result, songwriting wasn’t made the priority that perhaps it should have been. “We were doing a lot of covers,” Shirley says.

He recalls that it was about this time when “certain people around us—record company people and even band members—were starting to doubt the wisdom of recording at home. It invited trouble. And that was the environment under which Joint Effort was made.”

The group members were turning out a lot of recorded material at the time. “We were making incredible amounts of music,” Shirley says. “Steve had about four different projects all going on at the same time; it was just constant recording, and he wasn’t giving himself a minute to take a breather.”

Joint Effort was one of those projects, made with core personnel that Shirley describes as Marriott plus “Greg and some others. Clem was involved, and I was involved peripherally.” But he still characterizes the sessions as a Humble Pie project. “All four of us paid for it,” he points out. “So in that sense, anything that was made there was a production of something that we all made together, whether we were on the record or not.”

The liner notes for the 2019 release of Joint Effort don’t include detailed session notes, but Shirley recalls that vocal group the Blackberries were involved, along with Mel Collins from King Crimson. “We used to call him ‘All Horns’ because we would overdub him doing the baritone, the tenor, and the alto to make a brass section,” Shirley says.

Marriott himself played drums on some of the Joint Effort tracks, as did, Shirley suspects, Ian Wallace, also from King Crimson. While Shirley did play drums on a few cuts, still other tracks feature a drum machine. The technology was still in its infancy in the ‘70s, so the results aren’t always as spirited as they might have been with a human drummer. Still, Shirley expresses admiration for one of the drum-machine tracks, a rousing cover of James Brown’s “Think.” The album’s standout cut is a reading of the Beatles’ “Rain” that totally reinvents the psychedelic song as a cosmic blues rocker.

When Marriott presented the finished mixes for Joint Effort to A&M, the executives were not pleased with what they heard. “They rejected it out of hand,” Shirley says. “They said, ‘No, this is far below your regular standard.’ Greg and Steve were devastated.” He says that despite all of the turmoil that was going on in and around the band, Ridley managed to maintain a semblance of levelheadedness. “Greg was quite proud of what was being made, because he could just put all that other stuff to one side and see the music, if you like.” 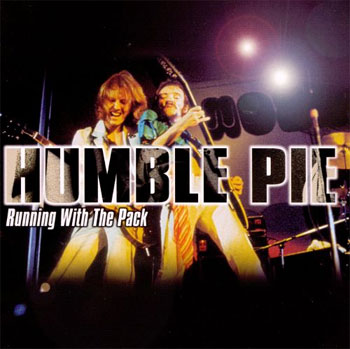 The semi-bootleggers of this earlier release couldn’t be bothered to place the photo properly, so Humble Pie has left-handed players. Alas.

The tapes from the Joint Effort sessions did eventually find their way into the listening public’s hands. The ten songs from that master had begun circulating among bootleg collectors, and in 1999 a release of somewhat dodgy provenance was released as Running With the Pack. That release was sourced from a tape of unknown generation, with fidelity to match. The new, officially-sanctioned Joint Effort is taken from the best quality masters available. “It’s not from the studio 16-tracks,” Shirley concedes. “What they are probably working from is that original cassette that was handed to A&M. But of course, in today’s world, you can take [a recording] that is not that great and return it to its original glory.”

Early copies of the new Joint Effort release—including copies sent to reviewers—went out with the wrong cover art. Those copies featured photos of Humble Pie circa 1971, a time when Peter Frampton was still in the group. The error has since been corrected, and the current cover features a live photo of the band live onstage. Shirley’s face is hidden in the shot, but he doesn’t seem to mind. “I’m just glad it’s finally been released as Joint Effort,” he says. “It was something that Steve and Greg wanted and something that we all did contribute to one way or another. And there are some nice pieces on there.”