Acoustic guitar trios are nothing new. But in the hands of the musicians calling themselves the California Guitar Trio, the instrument is approached in a unique way. And the sounds created are subtly different as well.

Founded in 1991 by an international aggregation – Hideyo Moriya from Japan, Belgian musician Bert Lams and Salt Lake City-born Paul Richards – the California Guitar Trio has its roots in Guitar Craft, a course of study led by King Crimson Guitarist Robert Fripp. The unusual program was as much personal development as musical theory.

“Right from the beginning of the day, it was very different from what I had been doing at my university studies,” says Richards. “We would start the day doing a half hour of a kind of meditation. Robert would lead us through bringing our intention through various parts of our body, to bring relaxation and improve our attention.” 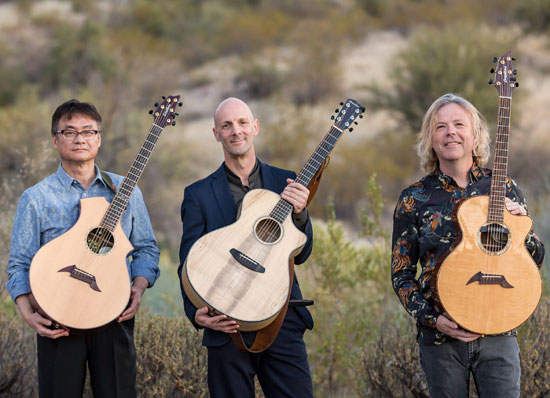 Guitar work focused more on technique than theory. The configuration of the instrumentalists was unique as well. Forming a circle, the guitarists would begin with a practice that Fripp called circulation. “Robert would give this instruction to play one note,” Richard explains, “and pass your note to your person to your right. As the notes went around the circle, it created a kind of a group melody. It was up to us to learn to listen to what was happening with the whole group. Playing just the right note at just the right moment would compliment what was happening with the whole group.”

It was at Guitar Craft where Richards, Moriya and Lams first met. Building on their shared studies, the three guitarists adopted Fripp’s New Standard Tuning – “more like a cello or violin, in fifths,” Richard explains – creating a signature sound that sets the Trio apart from other acoustic ensembles. Sometimes the three instruments together sound more like zithers or harpsichords than acoustic guitars.

Belying the almost supernatural musical simpatico between the Trio members, the three men come from vastly different backgrounds. Richards studied jazz in college. “I was basically a rock guitar player for all my early years,” he says. Lams’ foundation is in classical music, and Moriya brings both world music and surf guitar textures to the group. “That’s how it became so eclectic,” Richards says with a laugh.

“When people ask me what kind of music we play, I usually start out by giving quite a vague response,” he says. Richards begins by telling people that the Trio plays instrumental acoustic guitar music, but explains that they don’t sound like other superficially similar acts. “Rodrigo y Gabriela have their own kind of Latin style; Tommy Emmanuel has his own fingerpicking, Chet Atkins style. Whereas we have [the influence of] Robert Fripp mixed with rock, jazz, blues, surf, traditional Japanese music and classical music with European sensibilities.”

The California Guitar Trio has released more than 15 albums; like the group’s live shows, those releases often feature original compositions alongside inventive reworkings of material written by other artists. The Trio applies a rigorous standard when approaching a song in the latter category. “It needs to bring something new so it’s not just a cover,” Richards says.

By way of example, he mentions the Trio’s instrumental reading of “Bohemian Rhapsody,” the 1975 hit by Queen. Re-interpreting Freddie Mercury’s layered vocal harmonies and Brian May’s complex electric guitar parts presented a real challenge. “We present it in such a way that it makes sense musically,” Richards explains. “It’s become the unofficial sing-along piece at our shows; big Queen fans often will break out in singing during that piece.”

The California Guitar Trio’s approach may be unique, but it meshes well with conventionally-played instrumentation as well. Proving that point, the Trio’s latest album, In a Landscape is a collaboration with the standard-tuning based Montreal Guitar Trio.

After 28 years, the Trio remains a cohesive unit. “The music is the thing that, in the end, really keeps us going,” Richards says. “Hideyo, Bert, and I are still friends and get along really well. We still enjoy playing music together, and we’ve always been very good at finding music that keeps things interesting. It’s a combination between the friendship and the music that keeps things exciting.”