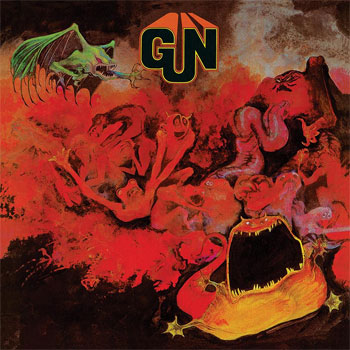 Brothers Adrian and Paul Gurvitz launched The Gun in 1967 a a re-branded and slimmed-down version of their previous band the Knack (no relation to the American power pop quartet). Then using the surname Curtis, guitarist Adrian and bassist Paul led a power trio with Louie Farrell on drums. Taking an aggressive and decidedly psychedelic approach to their songcraft, the trio recorded Gun in 1968. In October of that year, the lead-off album track “Race With the Devil” was released as a single, reaching the top ten in England. The single and album did well in other countries as well, though no American success was forthcoming.

The band did get noticed by some high-profile artists; they opened a number of shows for Pink Floyd. And when Jimi Hendrix performed at the 1970 Isle of Wight Festival, he inserted some “Race With the Devil” licks into his own “Machine Gun.”

Gun shows the group to be of a manic, proto-metal disposition, with a sound reminiscent of Love Sculpture (featuring a young Dave Edmunds) or the Open Mind. The orchestral flourishes and demented screaming of “Race” play well against Adrian Gurvitz’s speedy lead guitar work. In fact, horns and strings show up throughout the record—most notably on “The Sad Saga of The Boy and The Bee,” Gun’s second (and second-best) cut. In places Gun’s sound suggests what the Moody Blues might have sounded like had they rocked (a lot) harder.

A second LP, Gun Sight, was released in 1969; it largely sank without a trace. Gun went out of print by 1973. The album did receive a short-run vinyl reissue in the late 1980s, but has been largely unavailable in that format since then. Even CD reissues of Gun were limited to Europe and Asia. Real Gone Music’s modern-day vinyl reissue of this early hard rock nugget is pressed on red vinyl; the record sleeve features the original garish-yet-distinctive album art, one of the earliest projects for Roger Dean. Dean, of course, went on to greater fame as the creator of many of Yes’ most iconic album covers as well as that band’s logo.