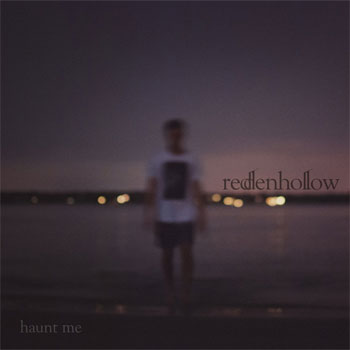 The opening strains of “Julian,” the first track on reddenhollow’s Haunt Me EP suggest a musical perspective not far removed from that of Fleet Foxes: breathy, gentle vocals and earnestly strummed acoustic guitar set against a soft-focus arrangement that’s the aural equivalent of a rainy day viewed through a steamy window. But Taylor Moses – the solo act who uses the reddenhollow name for his musical project – has more to offer than that single approach, alluring as it may be.

“Julian” takes its time to develop, and that approach seems to be a hallmark of Moses’ songwriting. The words come fast and furious – gently, though, you understand – and then the chorus hits. It’s a gentle, crystalline thing, with precise and minimalist single-note stabs on the piano.

And then the second verse begins. A chiming electric guitar with a rather ‘80s-flavored texture joins in, along with bass and drums. The drums have that cavernous, Phil Collins-gated-reverb feel, but somehow it works; the band (or “band” since it’s just Moses) surges forward in a way that might remind some listeners of the Alarm. As “Julian” winds toward its conclusion, those two contrasting approaches – gentle and soaring, both contemplative – spar with one another. A roaring, hypnotically insistent guitar figure.

“Man in Tree” is exactly the same length as the song that precedes it. And though Moses plays a repetitive pattern on his acoustic guitar, the song follows some of the same paths as “Julian” took. Moses’ vocal approach is different, though: more certain of itself, it seems. A single-note piano line helps make the point that in music, it’s often not what you play, but how you play it. The drum part putters along with a strong reliance on the toms, and only the subtlest use of cymbals. Oddly enough, the instrumentation of “Man in Tree” seems to blur together into an aural haze, but it’s not muddy. The phrase “they won’t do” is repeated over and over near the song’s end, mantra-like.

“Great Escape” shows that even with the same sonic elements – and a similar employment of them – one can make songs that stand on themselves yet fit together like pieces of a puzzle. Here, sheets or reverb and echo are applied to Moses’ voice, and the cymbals largely absent from the previous tune show up, albeit faraway and deep in the mix. Like “Man in Tree” – but unlike the other songs on the EP – it’s a Moses co-write with one or two other songwriters. “Great Escape” was released as a single ahead of the EP.

The title track has a vaguely country-and-western feel, and Moses surprises the listener by showing the depth of his vocal range; though the first three songs on Haunt Me suggested that his range leans toward the upper register, here he sings in a near-baritone. (His wordless backing vocals provide continuity with the other songs by way of their high-pitch. A model of subtlety wedded to a memorable melody, “Haunt Me” seems expressly design to haunt the memory of those who would hear it.

The final six minutes of the half hour long EP are filled by “High Tide Freak Out.” Spare electric guitar introduces the tune with a sophisticated jazz feel. Were it not for Moses’ vocals providing a kind of sonic glue, the song would feel out of place on the EP. The rapid-fire fire and neo-soul backing crooning might remind some listeners of Steely Dan or some of Steve Winwood’s 1980s solo work. It’s also more than a little reminiscent of Paddy McAloon’s band, Prefab Sprout, though Moses is distinctly American. The song easily features what is easily most energetic arrangement on Haunt Me, but it still remains mostly restrained. As the song passes the four-minute mark, Moses lets loose in a kind of shoegazey way; just when the tension seems to approach the breaking point, Moses pulls back, and “High Tide Freak Out” drifts along the soundscape to its conclusion.

Moses has recently completed an Australian tour in support of the EP, co-billed with American-born (but Australia-based) folk artist Mimi Gilbert.