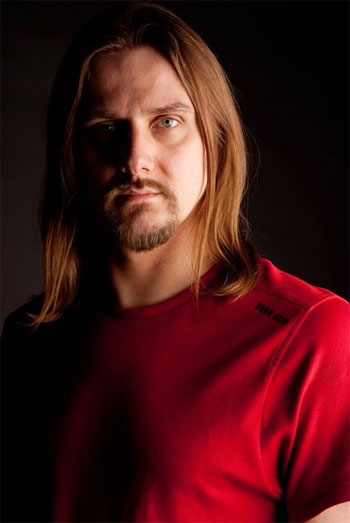 The first three Riverside albums are a trilogy, but recent releases don’t so much have that conceptual continuity. Is the idea of conceptually-linked releases something that you’ve left behind?

But I think that Wasteland, the seventh album, is the beginning of something again. I don’t think that it will be the first part of a trilogy. No, it will just have some connections with other ones. Maybe this post-apocalyptic thing; that’s [laughs] kind of modern these days. We’re just aiming into this, and maybe it will be convenient to continue that in a sort of way.

I always try to play with the formula, of course. That’s why the fourth, fifth and sixth albums have these connections with the titles, right? Four letters, five letters, six letters in the title and some acronyms. Anno Domini High Definition is ADHD, Shrine of New Generation Slaves is SONGS. I just wanted to mark what’s the most important for us.

But after that trilogy, I started to do something else and I also started my solo project, Lunatic Soul, releasing [those albums] in between Riverside albums. So, it was like the deep dig again, and now I created some kind of circle of something. I always love to look at my albums from the wider perspective and put them into something which is not like a single one. It’s only a part of something bigger.

How has the group’s musical approach has change in the 15-plus years since Out of Myself?

I’d say that the previous decade was, from one side, we created something quite original because we connected the heaviness and the mellow things together, full of melodies and everything. But it was also a bit of, let’s say, underground. The production, the arrangements were really intense. It was connected even to punk music sometimes. It was like like progressive punk, full of weird approaches. We had the drummer who used to play death metal and he started to play ballads; it was weird. Weird, and at the same time pretty original.

And with Shrine of New Generation Slaves or even with the mini album, Memories in My Head, I really wanted to change the approach, because I was tired of this underground approach. I wanted to open the windows, let the fresh air come in, and do something with the arrangements, do something with the melodies. Just to simplify the formula into more songwriting process than just doing the long, complicated things. So, with Shrine of New Generation Slaves, Love, Fear and the Time Machine, and even Wasteland, we’ve been focusing on the melodies, and songs, and songwriting. I wanted to skip this progressive part. I wanted to be a more alternative band than progressive. Progressive means, “This is the music for the guys who just love to listen to shredding guitar players.” And I don’t like that kind of music, really. It sounds like something that girls don’t like, which is not true because we play lots of stuff for women and we have that kind of audience now. So, I think we needed that kind of album like Love, Fear and the Time Machine or Shrine of New Generation Slaves.

And with Wasteland, I think we’ve found this bridge between the old Riverside and the new Riverside, a new approach, because the darkness of it returned. And I think Wasteland is just the beginning of a new chapter. Of course, we lost our guitar player; it was a really huge tragedy for us and it was really important force in Riverside’s music, but we’ve been always compared to someone else. The Polish Porcupine Tree, the Polish Dream Theater, the Polish Anathema. Even when we did Shrine of New Generation Slaves and there were three songs with a Hammond organ, someone started to say we are just the Polish Deep Purple! Jesus Christ!

And because of Piotr, his way of playing, we’d always have, “Oh, I love the guitar player because he plays like David Gilmour.” So, we always were someone. And we’ve noticed one thing. When we lost Piotr, we lost our Polish David Gilmour. So, we’re not the Polish Pink Floyd anymore.

So, some people started to have a problem with us because Wasteland is like the new chapter. Not only because we changed a bit of our music and approach to something; now it’s hard to compare. You listen to – I don’t know – Nick Cave, plus some Lunatic Soul, plus some western subjects, some others, something from Riverside in the past, but it’s not so easy to compare us to anyone else now.

Some people told me that, for the first time, they’d have this impression that Riverside finally became their own style. I don’t know if it’s true. I think that from the beginning we had this style, but there’s something that we still develop. We’re still growing up no matter what, with every album. We’re not Iron Maiden that records every time the same album! We’re just trying to do something else all the time.

Is there anything about Riverside’s approach to music – or your approach to lyrics – that is uniquely Polish?

Honestly, I’ve started to do that in Wasteland. I used to be inspired by British music; I had this kind of British melancholy. But with Wasteland, I changed some of the melodies into more Slovak ones, if you know what I mean. We’re a kind of sad nation, sometimes, and we love that kind of melancholic song, but with a different approach. And I think that when you hear the songs “Lament” or “Wasteland,” they sound a bit like Johnny Cash, but it’s not. “The Day After” and some of the other melodies are inspired by the Polish entertainment from my childhood; you can hear this Slovak folk approach. And I wanted to do that for the first time in Riverside. In the past, I did that in Lunatic Soul. Now I did it in Riverside. So, I think, after this tragedy that we had [the 2016 death of Grudziński], we finally started to play something with a Polish approach.