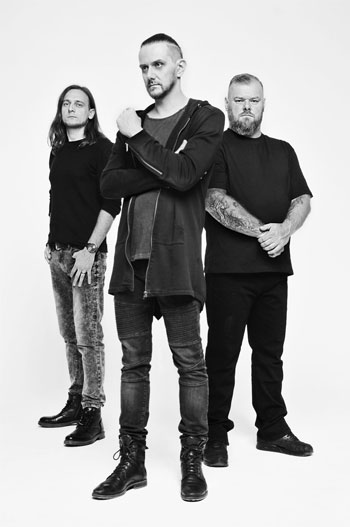 Riverside isn’t exactly a household name in the American music scene, but the Polish rock group is on a mission to change that. Founded in 2001, the band balances metal, progressive and ambient approaches with a strong emphasis on melody.

The group’s 2003 debut, Out of Myself, didn’t chart, but by the time of 2005’s Second Life Syndrome, Riverside had begun to build a following in Poland. Each successive album expanded the band’s fan base, charting first in the Netherlands, then Germany, then in Sweden, Finland and Belgium. And even though the band’s lyrics are in English, the group’s popularity at home is undeniable: beginning with 2007’s Rapid Eye Movement, every Riverside album has reached #1 or #2 on the Polish album charts.

Riverside suffered a major setback with the 2016 cardiac arrest and death of founding member and guitarist Piotr Grudziński, but a year later Maciej Meller joined, initially as a touring guitarist. While Riverside has visited the U.S. before, the band’s current tour represents its first serious foray to build its fan base in the United States. Featuring two dozen dates, the band’s North American tour in support of Wasteland kicked off May 3 at Atlanta’s City Winery. I spoke with songwriter, lead singer and bassist Mariusz Duda in mid-March, between live dates in Rome and Milan, Italy.

Going all the way back to beginning, Riverside seems an unlikely group. You joined with musicians with backgrounds leaning more toward the metal side of progressive rock, while your own interests are more on the atmospheric side of things. Did Riverside all come together smoothly right from the start?

Actually, yes. Because probably I was the only guy with a vision. So they just followed me and we did that together.

What, in fact, was the original concept for the band’s sound?

I was really [first] in touch with Piotr Grudziński the guitar player. We kind of became best friends already. The same age of birth, the same influences, the same music that we’ve been listening to. And we both realized that the emotional aspect is the most important in music. We were kind of – how can I put this? – sensitive guys. So, this sensitivity connected us, and we really wanted the sensitivity into our music. His playing with the guitar and my vocal melodies were the most important things in Riverside music.

And when we started, I was thinking already about us doing something which has a concept. A beginning, an end, something that has a story behind it. And I already wanted, from the very beginning, to have our first album be like that. And after that, another chapter has appeared. So it was just a kind of easy thing.

I was the main guy who wanted really to to have something behind [the music]. There are lots of bands that just play songs. Later, they just pick the best ones, title the album and, “Come on, let’s do this kind of best-of.” No, I always wanted to have the story first. And of course, [I wanted to] focus mostly on melodies, because for me that’s something that is eternal. The melodies and songs are always the most important.

Tell me about the decision made early on to sing in English.

That was the beginning of 2000s. The beginning of that decade, we’d been very open to people all over the world, and we wanted to reach a wider audience. These days, if Riverside started, probably we should start with Polish because [today] our country is different. If you sing in Polish right now, you have a much better position.

But we really wanted to play the music for everybody, not [just] for the people in our country. And these are different kind of genres; sometimes your language fits much better to music: some kind of oriental folk music or whatever. And that’s why there are lots of bands from Scandinavia or Iceland or something that just sing in their own language, and that fits.

What do you think it is about the band’s music that strikes a chord with listeners in Europe?

When we started Riverside, we really wanted to do two things: record the albums and play shows. And in those days, it was nice to have the album first and later go on tour promoting it. These days, it appears that you had to tour all the time because people get used to this, and if you don’t tour, people start to have another band that they follow.

But we knew from the very beginning that we have to do things. Not record one album and do three years of break, no. So we knew that we had to be an active band. For us, it was really natural to go and play, not only in Poland, but also in Europe and gain more [fans]. But the very beginning was hard for us; somewhere in Holland we had like 80 people. Then, in Germany, 120. But with every year, the audience was bigger and bigger. And now, we can finally play for thousands of people.

As far as songwriting, do you road-test material before you go into the studio?

First, I compose songs by myself or sometimes in front of the guys, and they add up something from time to time. Later, we record this, and later [still], we go on tour with this material. But I don’t like to play live the arrangements that you can find on the album. I always try to slightly change this or that, do the mixture. That makes your show much more unique.

We are now touring to promote our seventh album, and I think that after all these years, I finally found a good set list! In the past, we’d be playing, we were on the stage, and people would listen to that. Now we are more entertaining people; there’s more interaction between us and the audience. I think that Riverside changed on the stage, and it took us some time.