A Quick Chat with Mac Arnold 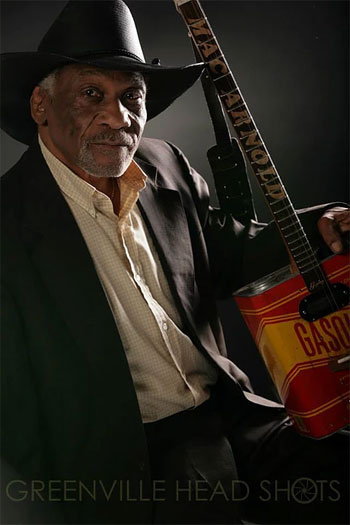 Mac Arnold has enjoyed a storied musical career, one that has seen him work with artists including B.B. King, James Brown, Bill Withers and many others. He retired from music some years ago, but Arnold’s love for the blues brought him back to the stage. He plays regularly with his band Plate Full O’ Blues, and has released several albums and a concert DVD.

You play an electric guitar fashioned out of a gasoline can; how did that come about?

Back in 1946, my father was a cotton farmer. I was one of 13 siblings, so we didn’t have much money. He went to Florida, picking oranges to make ends meet, and while he was gone one of my brothers took one of his gasoline cans and built a guitar. He took it to school for show-and-tell, and he won first place!

Is it true that you led one of the first integrated bands in Greenville, S.C. back in the fifties?

Yes. We played rhythm and blues at the time. We couldn’t even play most places when we first formed the band in ’59. In the early sixties, we got a regular gig at the Guna Motel & Restaurant.

After a full career, you retired. What brought you back to playing music live starting in 2000?

I was driving a truck part time, and I met [multi-instrumentalist] Max Hightower. He heard me singing a Muddy Waters tune, and the next time he saw me he said, “I’ve been doing some research on you. You don’t need to be driving a truck, you need to be playing the blues!”

You’ve played r&b, soul and the blues; these days you focus on the latter. What is it about the blues that’s special to you?

Well, there’s something about leaving home – which I did for 40 years – and then coming back. Rock ‘n’ roll came from the blues; r&b, reggae and a lot of different genres came from the blues. So I decided I’d go back and see what I could create from the roots side of the music.

Looking back over your career, was there a point at which you felt, “I’ve made it”?

It’s the strangest thing: I still don’t feel that I’ve made it. Playing music, you’re never satisfied with what you’re doing; you’re always trying to find a way to improve. And I’m still striving.

You have a lot of upcoming live dates on your calendar. When you’re not playing music, what else are you up to?

I’m farming! I’ve got an organic farm on my property, and that’s what I do when I’m not playing music. I sold my restaurant last September, and now I’m focusing on building up my nonprofit I Can Do Anything Foundation. It’s designed to help encourage children to play music.

What’s the best advice you ever got?

The great Muddy Waters said to me, “Always be conscientious, and treat your fellow man like you want to be treated.” And that’s what he did. He always treated us like we were part of his immediate family. So that’s what I like doing.