Comics Drawn to the Magnetic 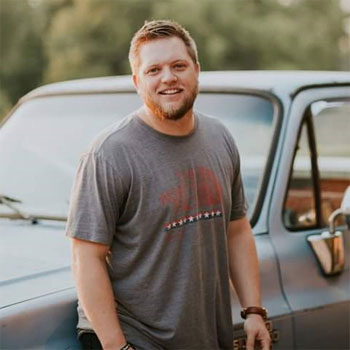 Comedy is serious business. Developing a stand-up routine that feels spontaneous takes a great deal of effort, and when a performer is onstage with little more than a microphone and a spotlight, there’s nowhere to hide. Four accomplished comics – two from Western North Carolina and two based in Colorado – bravely brought their humorous stand-up to the Magnetic Theatre on April 12.

Alabama-born showcase headliner Derrick Stroup’s story of how he got into comedy reads like an old joke: “a comic walks into a bar…” In fact, he wasn’t a full-time comic at the start; he was the pub’s manager. “I ran a bar in a small college town in Jacksonville, Alabama for about four years,” he recalls. “We had lots of live music come through, but we never had comedy.” He decided to change things up, and began by taking the mic himself.

And he had a plan to attract interest. “I made pitchers of beer $1,” he admits with a self-effacing laugh. “It’s not the way you’re supposed to start in comedy, but that’s the way I got into it.”

Stroup’s gambit worked, and he hit the comedy circuit. He relocated to Colorado, paying his dues onstage and getting on the bill for some high profile showcases like last August’s High Plains Comedy Festival in Denver. Being a Southerner in Colorado makes him exotic, he says.

“It’s the same as it would be if I was from North Carolina,” he explains. “We [Southerners] are in the news all the time, for all the wrong reasons. So everybody has their opinions. When I step onstage in Boulder and the host says, ‘This gentleman’s from Alabama,’ everybody quits talking. They’re thinking, ‘Holy shit, it’s Forrest Gump!’”

The “quicker” part is certainly true. Defying the stereotype of the slow-talking rural rube, onstage Stroup unleashes an ever-building monologue; he starts fast and gets faster, and louder. He likens his approach to “Sam Kinison mixed with Ron White.”

Stroup pauses a beat, in the knowledge that it’s difficult to reconcile how Kinison’s over-the-top ranting meshes with the approach of the Blue Collar Comedy Tour star. “I know you’re like, ‘How does that even happen?’” he says. “Well, I’m a storyteller … who loses his mind.”

Three other comics were on the bill for Magnetic Theatre’s comedy showcase. Asheville-based Cody Hughes is a frequent host of the Slice of Life Comedy open mic at PULP; he has toured regionally and in the Midwest, opening for well-known comics including Lewis Black.

Also from Asheville, Hilliary Begley launched her comedy career at open mic nights; in 2017 she scored a gig opening for Jon Reep at the Orange Peel. Begley made her motion picture acting debut in the 2019 Netflix movie Dumplin.

Derrick Stroup said that he’ll roll into town well ahead of the showcase. “I like to get to towns a day or two before I perform, because I like to hang out, walk around and see the people. Because that’s really what my type of comedy – Southern comedy – is. It’s more about the people.”

But Stroup has played Asheville before, and already knows his way around. He notes that multipurpose venues around the country differ, and some don’t lend themselves well to stand-up comedy. “But the Magnetic dodges that problem,” Stroup says. “It’s got a theatre feel.”

And the North Alabama native living in the Rockies feels right at home visiting Asheville. “I tell everybody that Asheville is like a little slice of Colorado,” he says. “You’re driving through East Tennessee, and there’s all these truckers. And then – boom – you hit Asheville, and everybody’s eating wasabi almonds and going on a jog with their dog.”