A Chat with Peggy Ratusz 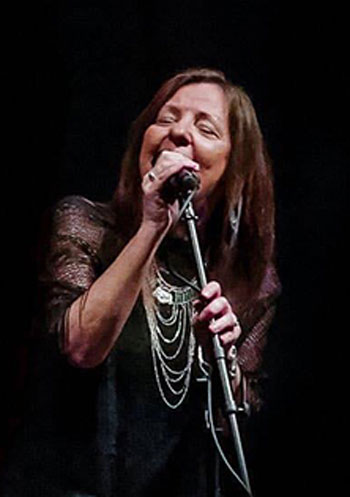 For some time now, vocalist Peggy Ratusz has been one of the busiest musicians in Western North Carolina. She’s as comfortable belting the blues as she is singing sultry soul or crooning standards. In addition to her Bygone Blues Duo with Aaron Price, she performs often with Paula Hanke in a presentation called “Love is a Rose: a Tribute to Linda Ronstadt.” On occasion, Ratusz takes a break from the themed shows; she did just that lasy May when she fronted the Peggy Ratusz Trio at the Purple Onion in Saluda.

Part of your repertoire focuses on early female blues vocalists. What’s special about those artists and their place in history?

Women of color of the early 1900s – Bessie Smith, Gertrude ‘Ma’ Rainey, Mamie Smith – kind of started the bigger movement of blues. I think they’re a little bit unsung, so I’m trying to honor them by bringing their songs and stories into some of my shows.

You’ve put together quite a number of themed shows including an annual tribute to Elvis, and several others. How is this show different?

We’re going to marry all of those shows together. I stay pretty close to home for performances, and I don’t want to give people the “same old same old.” So I kind of reinvent myself for every one of these special shows. Jonathan Pearlman is my go-to guitar player and arranger, and he suggested to me, “You need to do a show where we conglomerate all these wonderful themed shows into a single night.” So it’s a sort of sampler.

Because you do so many different kinds of shows, is the audience different for each one?

My “posse” is growing, but there are new faces in the crowd as well. A good one-third of them are baby boomers, or people in their 40s. They like reminiscing, and the nostalgia of it all really brings joy to them. Also, I’m a vocal coach to a lot of young people; some of them come to shows and bring their friends. So the demographic is pretty varied.

You stay very busy with local and regional performances. How many shows do you do each year?

I’d say an average of 130 or 140 dates each of these last couple of years. I have a pretty steady schedule ahead of me, and that’s wonderful.

What’s the common thread that ties all of your different musical projects together?

It’s the camaraderie. Jonathan and Grant Cuthbertson [upright bass] and I have such a kinship, and we all really enjoy the songs we do. I think those songs resonate with people – even the ones they might not have heard before – because of the way we play them. That ropes them in; I think the common denominator is our hearts and souls.

There are indeed some songs in your set that many in the audience won’t recognize, like Dolly Lyon’s “Palm of Your Hand.” What’s your goal in presenting those tunes?

Part of it’s to provide a kind of musical canvas to which we can apply our own musical character. When I sing, I try to help the audience understand why I chose this song to share with them, so that they can love it as much as I do.