It’s something of a tightrope walk to move forward musically within the confines of bluegrass; there’s a subset of the genre’s fan base that resists change. But Unspoken Tradition confidently masters that path, with a sound that’s firmly rooted in history yet forward-looking. The group recently released its third album, Myths We Tell Our Young. 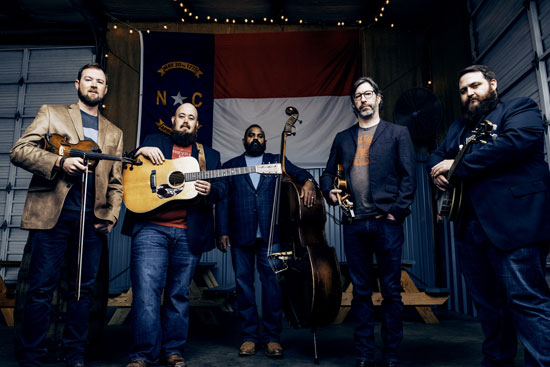 Ty Gilpin, the band’s mandolin player, makes the point that all forms of music – even bluegrass – are constantly evolving. “There was a time when bluegrass music was considered [to be] made only by rural folks who lived in more isolated communities,” he concedes. “It’s what they did for their own entertainment. And the music was passed down generation to generation in the songs that they play, the way that they play them and even the subject matter.”

But in recent years, bluegrass has taken on more of an international character. “As the genre has grown, there’s room for influences [in addition to] the handed-down traditions,” Gilpin observes. “Unspoken Tradition still loves to sing about things that matter to us: our community, hearth and home, the love of the place that we’re from,” he says, but the group’s lyrical and musical worldviews expand to take in more as well.

A representative example of that approach to the music is “Land,” the second track off the new Myths We Tell Our Young. “It’s basically the same kind of song as the old bluegrass classic ‘Little Cabin Home on the Hill,’” Gilpin explains, “but it doesn’t have just your three chords and repeat of the same verse-chorus-verse-chorus. It’s got a different structure.

“You can only listen to those I-IV-V traditional bluegrass chord changes over and over for so long,” Gilpin says with a chuckle.

On other songs, Unspoken Tradition follows a traditional musical path, but explores modern-day subject matter. Gilpin mentions another new track, “Cold Mountain Town.” He says that the song’s lyrics “directly address the changes that Asheville has witnessed in recent years. Decades ago, it was a more quaint mountain community where we had a lot of artists and arts and crafts,” he says. “Now it’s becoming a lot more gentrified; the influence of people moving into the area is having a prominent effect.”

Both of those approaches gently update traditional bluegrass while holding onto the qualities that make it special. “So not only is the music evolving,” Gilpin says, “but the subject matter of the music is also changing to reflect what’s happening in the world today.”

Like most musicians, Gilpin isn’t overly fond of genre labels. “I don’t see that there’s anything wrong with breaking the mold a little bit,” he says. “People ask us, ‘Are you guys traditional bluegrass? Or are you progressive bluegrass?’ We like to use the word original, because we write a lot of our songs, and throughout a performance we’ll land in both camps: traditional music and something that’s influenced by something other than bluegrass.”

The band arranges its material together, but most of Unspoken Tradition’s songs are written by guitarist Audie McGinnis, Gilpin or bassist Lee Shuford (recently replaced by Sav Sankaran; the band’s lineup is rounded out by Zane McGinnis on banjo and fiddler Tim Gardner). Gilpin says that Audie’s songs are “a bit experimental” and tend to spotlight his vocals. “He’s got an authentic country sound with some gravelly blues texture,” he says. As for his own songwriting style, Gilpin says, “I’m a little bit more influenced by traditional stuff.”

From the perspective of many music fans, Gilpin isn’t just Unspoken Tradition’s mandolinist. He’s also the public face of Crossroads Entertainment, the parent company of the band’s label. Part of the company’s marketing team, he coordinates many public events associated with album releases. But Gilpin emphasizes that he wasn’t at all involved in Myths We Tell Our Young being released on Mountain Home. “I didn’t even approach the people who make the decisions at the label,” he says. “I was in absentia on that one.”

But he’s fully involved in Unspoken Tradition’s bluegrass mission. “The fact that it’s lasted is because it’s participatory music,” he says. “It’s not just ‘listening’ music. People can get up there and play.”