Home  »  book • interview • new release • new wave   »   A Conversation with Laura Davis-Chanin, Author of ‘The Girl in the Back’ (Part One)

A Conversation with Laura Davis-Chanin, Author of ‘The Girl in the Back’ (Part One) 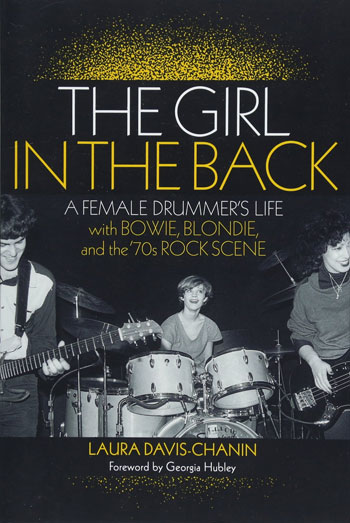 Laura Davis-Chanin is in a unique position to write a personal chronicle of the late ‘70s and early ‘80s New York rock scene. As the drummer in the Student Teachers, she experienced firsthand the scene happening in places like CBGB’s, Max’s Kansas City. She got to know many of the main players in that scene. Better yet, she got a rare opportunity to spend time with David Bowie, not as a hanger-on, but as a friend. Davis-Chanin has penned an extraordinarily rich account of those years.

The Girl in the Back: A Female Drummer’s Life with Bowie, Blondie and the ‘70s Rock Scene (Backbeat Books, 2018) does include its share of sex, drugs and violence, but ultimately those aren’t what it’s truly about. It’s the story of one woman’s coming of age against the backdrop of an important part of music history. And it’s the story of friendship and inspiration in the face of some real setbacks, including being kicked out of one’s own band and developing Multiple Sclerosis. I read a lot of music memoirs, and The Girl in the Back rises above most of them. I recommend it without reservation, and when I got the opportunity to speak with Laura in late February 2019, I jumped at the chance.

Tell me about the circumstances leading up to writing the book.

Laura Davis-Chanin: What happened was that David Bowie had died. Obviously, many of us woke up kind of in shock when we saw that, and I was one of them. And it really weighed heavily on me that day, and I did a lot of soul-searching. Because I hadn’t spoken to him in a long time, and I’d gone in a different route in life. So I was trying to put it all in perspective for myself.

But the thing about Bowie is that he was such an enormous presence for many, many people across many, many disciplines in life. And I got to the point where I was thinking about his effect on me personally: in many ways, he kind of set me on the direction that I ended up going in. And I just felt that I had to write about it.

So, what I did is, I wrote this essay about that night when I was at dinner with him and he talked to me about what I was going to do at that point after having been diagnosed, and thrown out of the band, and lots of different things. The essay was published at the Partially Examined Life website, a site where I have a podcast, PhiFic, which is philosophy and fiction.

I guess about a month or two later, my agent—who also happened to be an old friend of mine as well, but we weren’t connected professionally at that point—happened to see the essay. And he started bugging me about writing this book. He had bugged me throughout the years, here and there, and I’d always said no. Oddly, I’m a pretty private person. So, I didn’t really feel comfortable doing it over the years. But he really pushed me hard.

So, I said, “All right, I’ll give it a shot, but if it’s really hard for me…” Not in terms of skill or technique, but emotionally, “Then, I’m going to stop.” But it ended up being a very positive, cathartic experience.

I had reconnected with the people in my band already because, in 2014, our compilation CD had been put out through [the band’s singer] David Scharfe. When I started writing the book, we re-reconnected and in many ways, it was really nice and wonderful, and kind of a unique experience for me.

The book comes off as a pretty straightforward and unvarnished account of that period in your life. From a personal standpoint, did you feel the need to skirt around certain topics or issues, or at least treat them delicately?

I kind of went full speed ahead. When you’re writing, you have a general idea of where you’re going, but you don’t necessarily know exactly where you’re going. And in the process of writing, that comes out; it happens. It’s like, “Oh, wait a minute. That’s where I’m going.” I even still have in my file on my computer here these outlines of, “Okay, this is where I’m going. I’m going to cover this, going to cover that,” but then I got into it and I was just doing the writing, and it came out pretty intensely and revealing for myself.

And when I hit certain things — like the abuse by Jimmy and the MS diagnosis and things like that — I didn’t feel like, “Oh, my God. I don’t know if I can handle this,” for some reason. It felt very helpful to write about it, and to write about it as succinctly and as clearly as I could. I didn’t feel scared of those topics. Maybe because I was at a point in my life that I can do that. You reach a certain point of maturity in life. You’re like, “Oh, I can deal with this.”

From the other angle, was there any kind of encouragement — spoken or unspoken — to include a certain amount of juicy detail that you might not have otherwise written about?

You mean in terms of the abuse by Jimmy [Destri]?

I wasn’t specifically thinking of that, but now that you mention it, I guess I probably was.

When I got to that, [I had been] going through a linear progression of, “the band started in 1978, and then this happened, and this happened.” So, obviously, I hit stuff as I was moving along, in terms of memory and in terms of the writing. And when I hit those things, that became a challenge: “Okay, what kind of writer are you? Are you going to really reveal this? How do you feel about this? Is this something that you’re going to just skirt over?”

And I felt very strongly that I had to be very blunt about that, very clear, and the same with the MS. I just went through the details of what I experienced. I remember thinking, “Wait a minute. What’s wrong with my tongue? Why does my tongue feel swollen?” I was just absolutely convinced it was the drugs and the partying that comes with rock and roll. So, I didn’t feel hesitant to be as blunt and revealing as I ended up being; I felt it was really important.

When you were writing, did you find that you were easily able to write from the perspective of “that” Laura? In other words, the one who was young and experiencing those things in real time? And did the present-day Laura ever sort of get in the way of your being able to tell the story in that linear fashion?

Actually not. It’s funny how you say that because I’m still in the process of working on a draft on the next book, which is on Michael Lago. He’s the guy who actually discovered Metallica. And he’s actually an old, old friend of mine. He’s mentioned briefly in [The Girl in the Back]; he was there when our band started, and he was there from the beginning. So he and I have been working all this last year on his book. He had a movie come out about him on Netflix called Who the Fuck is That Guy?: The Amazing Journey of Michael Lago.

Anyway, here I am giving you the whole Michael Lago story. But my point in bringing this up is that I just got an email back from the publisher who had read through the draft of Michael’s book just last week. Aand the one thing he remarked about was how at certain points, he really felt like he was there in the moment. So, I remember doing that when I was writing my book; I felt like it was really important — and it felt very natural and comforting, actually — to be able to put myself back in the moment and describe what I was going through in that way.

And I’ve gotten that response from a number of people about the reading of the book, that it felt like it put them right in that time, like they were experiencing it as well. And I feel very comfortable doing that. I’m working on a novel now and I find myself writing in the present, even though it’s not the present. Because I’m writing it [about] when I was a younger person. For some reason, that comes to me very naturally: to put myself back in whatever time it is that I’m in and speaking in the present of that time. I don’t know why it’s natural for me. But I had no problem with that.