Moves: Movin’ On Up

More than a decade ago, guitarists Stephen Murray and Matt Martin launched their band, Holy Ghost Tent Revival, as a sort of hybrid between ragtime jazz and rock ‘n’ roll. Seven albums, two EPs and countless gigs later, the band looks much the same. But it sounds completely different. Reflecting that change, the band is now rechristened Moves. Showcasing a more modern soul and r&b-influenced rock sound, the group celebrated the release of its new self-titled album with a March 9 show at the Mothlight in Asheville. 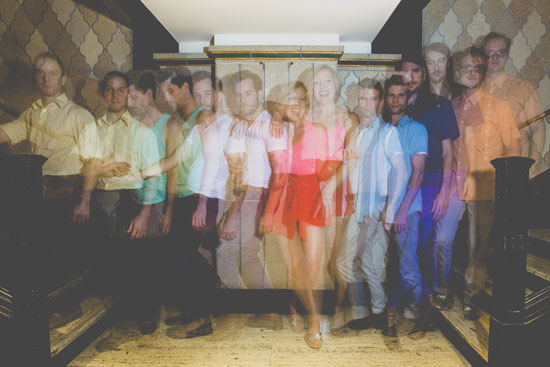 From the perspective of the band members, a name change was necessary and inevitable; the idea of re-branding first arose three years ago. “We spent the better part of ten years touring like crazy people, and we realized that the music that we had put out in 2009 through 2016 was of one era, one kind of style,” Murray explains. “We were feeling a little stuck; people always associated us with ragtime Dixieland.” He notes that as much as the band emphasized its style change in its bios and made a point of not performing older material, “festivals would still market us as having that Dixieland sound.”

Murray recalls the band’s collective conclusion: “We’ve got to do something.”

Discussions centered around the idea of making moves forward. “My fiancée suggested the name,” Murray says. “So we put it in the list of 300,000 other names we were thinking of, and it just felt like the right one.”

Complicating matters further is the fact that the former Holy Ghost Tent Revival now operates under not one but two different names. “Big Sound Harbor has the same members,” Murray explains. “But it’s geared toward Dulci Ellenberger taking center stage and leading the band.” Big Sound Harbor’s repertoire primarily features Ellenberger’s original songs. Moves, by contrast, is built upon a foundation of material arranged by the band as a whole and featuring three lead vocalists.

Acknowledging that the dual identity might look confusing on paper, Murray believes that it suits the creative goals of the musicians involved. All seven of them—guitarists Murray and Martin, Kevin Williams on bass, Hank Widmer on horns, trumpeter/keyboardist Charlie Humphrey, drummer Ross Montsinger and guitarist Dulci Ellenberger—are involved in other musical projects as well.

Murray says that that matrix of activity “helps keeps our finger on the pulse, keeps us motivated and excited. To continually be creating is a really wonderful space to be in, when you can find other projects that really kind of speak your truth and what you’re trying to put out in the world.”

The collective truth of Moves is reflected in new songs, many of which have a sociological point of view. “Dulci openly speaks about having written ‘Same Thing’ right after the election of 2016,” Murray says. “It’s a call out to everyone that though we are different, we all want the same things: love, acceptance, human rights.”

The song “Sleeping” is a social statement, too. “It’s a commentary on the economic injustice that we’re facing and the feeling [of being] overwhelmed and exhausted by it all at times,” Murray says. The song’s musical approach is deliberate and thought-out as well. “The build at the end brings in a little bit of chaos and rawness to the listener’s experience,” he says.

Moves brings an audiovisual component to that experience, too. To date the group has produced at least five professional-grade music videos for songs on the new album (plus one for a non-album track, an impassioned reading of the Rolling Stones’ “Gimme Shelter”). “With the re-branding of the name and dropping this album, we made the choice to create as much content as possible to excite our fan base,” Murray says. “We want to make people realize that we’re doing something new and different, but that’s it’s still the same people.”

While the group is celebrating the release of its twelve-song album, in general the emphasis is more on individual songs. “We’re not saying goodbye forever to the idea of releasing an album,” Murray explains. “But we are focusing more on singles, and meshing that content with videos or some experience beyond just audio.”

To that end, at least two more singles are currently in the works, with more videos to come as well. “We’re going to keep pushing out new music,” Murray says, “so that people understand that this is an ongoing and very exciting project for all of us.” The band has hopes of filling its late summer and fall schedule with festival dates and spots opening for national acts.

The group isn’t taking the re-branding lightly; it’s been in the works for quite awhile. The songs on Moves were recorded, mastered and completed in 2017. “It’s been our baby for a couple of years,” Murray admits with a laugh. “It feels incredible to finally get it out.”