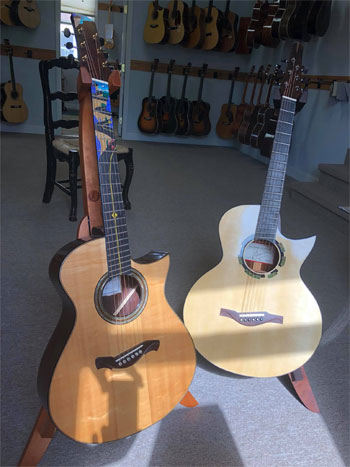 Service Brings a Smile
Asked what he enjoys most about his work, Heumiller has a ready answer. “It gets back to that idea of service,” he says. “But really, it’s that look when we hand somebody a guitar, and we know that’s going to change their life.” He admits that phenomenon doesn’t happen with every single buyer and guitar. But it does happen a lot. “The guy is sitting there playing the guitar, and that look comes over his face,” Heumiller says. “And I just know: he’s done. I always tell people, ‘When you get it home and you can’t walk by it without grabbing it and playing it, that’s a good guitar.’ The rest of it is all superficial. Will it make you play and make music? Buy it. You’re done.”

For clients, the experience of choosing a guitar—whether it’s from Heumiller’s small and carefully curated inventory, or the result of a custom build—is a highly personal one. “What makes Paul special is his motivation to get the right guitar in a client’s hands,” says Tony Russo, a longtime client. Another client, Henry Welt, echoes that sentiment: “Unlike a conventional relationship between buyer and vendor, I consider my relationship with Paul to be a friendship with a trusted advisor.”

The service Heumiller provides includes asking the client—via phone, or more often online video chat—a lot of questions. “I’m asking them, ‘What are you playing? What genre? What guitars do you love? What players do you love? What would you like to play five years from now?’” Paul says. With that information in mind, he can make specific recommendations.

“Then,” Heumiller continues, “it gets down to start talking practical. ‘What do we have in stock? Are you willing to wait and order one? I have two in stock.’ So, I’ll play those for them. They’ll say they like the sweet or warmer tone versus brighter, and then I can play those two.” When a final selection is made, Dream Guitars ships the instrument, providing a three-day trial period. “I’d say that 80-plus percent stick,” Heumiller enthuses. “That’s because I care enough, because we ask a lot of those questions, and we don’t rush it.”

Not every inquiry leads to a sale, of course. And because Paul doesn’t think of himself as a salesman, he’s okay with that. “There are some people who are just looking for a deal,” he says. “If it’s too business-y, I’m not interested. If it feels like a sale—if it feels like I have to try—it doesn’t feel good to me.”

Since the worldwide Great Recession of a decade ago, Heumiller has seen some changes in the rarefied marketplace of handmade acoustic guitars. “The phone completely stopped ringing in ‘08 and ‘09,” he admits. “Even people who were quite wealthy weren’t spending it.” And since that time, American buyers—Dream Guitars’s primary clientele—have become a bit more fiscally cautious. Fifteen years ago, he wouldn’t be surprised to have a client tell him, “Hey, I’m getting a home equity loan. I want to buy a $10,000 guitar,” Heumiller says. “Now they’re more like, ‘I’ve got to sell one before I buy one.’”

One thing that pleasantly surprises Heumiller is the constant reminder he gets regarding just how important music is to people. “They prioritize music as ‘soul food’ in their lives,” he says. “Maybe they’re making a lot of other sacrifices everywhere else in their life, but they’re going to have that one guitar that gives them an hour of total peace at night, or whenever they get a chance to play.”

Heumiller re-emphasizes his main point. “I’m not really selling anything; these guitars sell themselves.” He laughs and says that he considers himself a kind of sherpa. “If I get you the right one in your hands, you’re going to know, and you’re going to fall in love. And that’s it.”