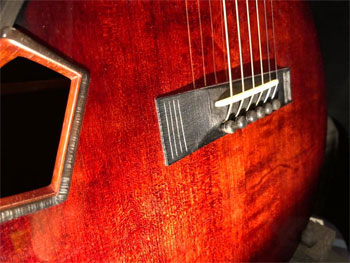 The Inspiration of Handcrafted Instruments
Heumiller explains the inspiration that guides him. “It’s a combination of things,” he says. “Of course, there’s my love of guitars and music, and how much guitar affected my life.” And he relishes the opportunity to match players with instruments. “I just had a 14-year-old classical prodigy in here; I helped him and his mom find a guitar,” he says. “That’s why I do this.”

But he suspects there’s an inherited dimension to his inspiration as well. Paul draws a line back to his grandfathers, both of whom were born in Germany. “One worked at Steinway Pianos in New York City,” he explains. “And my other grandfather was a metalworker in Germany. I’ve always loved metal shop, wood shop; for years I used to put together my own electric guitars.” While he insists he shouldn’t be classified as a luthier, Heumiller acknowledges that he has received training in the art of guitar building. “So from that side, I totally appreciate what it takes to build one of these things.”

That appreciation extends to a kind of reverence for custom guitar makers themselves. “Even now when I meet builders and see how passionate they are, I really love being able to help them,” he says. “They’re just awesome folks; it’s a great community.” Ultimately, Heumiller is more a matchmaker—bringing together musicians and custom guitar makers—than a dealer or middleman. Spending time with him, one gets the feeling that he’d do this even if it wasn’t his livelihood.

When talking about the experience of guiding a player toward the selection of a custom guitar, Heumiller often uses the metaphorical phrase “soul food” to describe the end result. And he has no end of anecdotes that illustrate the idea. “One of my favorite clients is a 72-year-old guy,” he says. “He called me up and said, ‘I put off learning guitar my whole life. I had my kids, they grew up, and I had to help them. Now I’m going to play.’” The man bought an instrument from Dream Guitars. “He called me up six months later,” Heumiller says, a warm smile on his face. “He told me, ‘I’m in a guitar orchestra now!’ I want to be part of helping people do things like that.”

Some two decades after starting his business, Heumiller remains happy that he has taken Martin Simpson’s advice about focusing only on high-end instruments. He expresses boundless admiration—awe, really—for the care and effort that goes into the making of a handcrafted guitar. “Somebody spends 100 or 150 hours making them,” he says. “I’ve been in shops where they’re deciding, ‘Do I take one more pass of the chisel to get the most tone, or do I leave it alone?’ He says that approach stands in sharp contrast with the factory method: “Cut it the same way, glue it the same way, stamp it out.”

Heumiller emphasizes that one can see and hear the difference between a fine, handmade guitar and a mass-produced one. Waving his hand in the air to draw attention to the instruments on the walls of his showroom, he says, “I’ve had people crying in here. I hand them a handmade guitar, and the price doesn’t matter. I hand them something that is so open and so moving that they literally well up. These guitars are different. And you can’t do that at a thousand-dollar price point. You just can’t.”

Most of the guitar makers with whom Heumiller works make as few as 10 to 20 instruments a year. “That’s about all you can do when you’re building by hand,” he explains. “Most guys make one or maybe two at a time; it takes months for those to be done, then they move on. And if there’s any kind of inlay or artistry, that takes another 100 hours.” That extreme high-end, labor intensive process helps explain the lofty price of the guitars Heumiller has on offer. “Some guitars have to be $20,000, $30,000, $40,000,” he says. “Because it takes [builders] so many hours of time, and so many years before that figuring out how to do it.” He makes the added point that most handcrafted guitar makers only see a profit in the last five to ten years of their career. “It takes a long time for a builder to get on the plus side of things; it’s a big learning curve.”

Dream Guitars’s stock consists of a few hundred guitars from high-end builders, plus occasional trade-ins. And Heumiller often serves as a liaison between builders and clients wanting a special, built-to-order instrument. “That’s a big part of what we do,” he says.

Considering the price point of these fine acoustic guitars—it’s rare to find an instrument at Dream Guitars priced under $5,000—the demographic of Heumiller’s clients is primarily in the 50 to 70-year old range. “They’re people who have either played guitar their whole life, or who are getting into it later in life,” he says. His clients are a mix of professionals, semi-pros and collectors. “As logic would dictate,” Paul adds, “younger clients—age 30 to 50—are buying from the lower end of what we offer.”

Most everything about Dream Guitars’s approach is the opposite of the customary retail method of selling musical instruments. Volume dealers—both of the brick-and-mortar variety and their online counterparts—may sell good quality guitars, but the primary focus is on moving inventory. “On the business side, I’m where I want to be,” Heumiller says. “I don’t want to sell even 500 or 1,000 pieces a year.” He says that in a typical year, Dream Guitars might sell 200-300 instruments. And the timeline from initial inquiry to the guitar finding its way into the client’s hands often takes several weeks.

It’s fair to wonder why a prospective buyer might not simply go direct, cutting out any middleman. Heumiller smiles knowingly at the suggestion. “The first reason is that we’re the same price,” he says. “Many people think we add on to the builder’s price, but we don’t.” Dream Guitars takes a commission from the sales, and builders are happy to have Heumiller and his team do all the marketing and support work. “We’ve built a machine for representing builders’ work at the highest possible level,” he says, noting that dreamguitars.com received nearly a quarter million visitors last year.

The other reason clients come to Dream Guitars is for the expertise. “We want to help you find the guitar that’s going to motivate you and make you want to play,” Heumiller says. “I think that’s our reputation.” He says that many prospective clients are looking to be educated. “They know there’s this world of custom builders; they have an idea that those instruments are better than the factory guitars they’ve been playing for the last 20 years.” An initial phone call starts the education process. “There’s a lot of back and forth. Like, ‘Who is Bill Tippin? Who is Jordan McConnell? Who is Ervin Somogyi?’” Paul notes that Dream Guitars’s website features a demonstration video—featuring high-definition audiovisuals created in the company’s Weaverville studio—for every guitar in stock.