A dealer in the highest of high-end acoustic guitars, Paul Heumiller is in many ways an unlikely entrepreneur. While his company, Dream Guitars, sells fine handcrafted acoustic instruments from the world’s most highly regarded luthiers, he doesn’t even consider himself a salesman. Instead, he’s a guitar sherpa serving up metaphysical soul food.

Heumiller’s interest in music came naturally, and at an early age. The youngest of nine children growing up in Freehold, New Jersey, Paul watched several of his older siblings play instruments—keyboards, drums and guitar—and caught the bug. “I started playing when I was young,” he says. “I took over my sister’s nylon string folk guitar and all of her Alfred’s [Basic Guitar Method] books, and just went through them.” Then his older brother gave Paul an electric guitar. “That, of course, changed my life,” Heumiller says with a chuckle. By age 13 he was serious about the guitar. “I started taking lessons then,” he says, “and to this day I still take lessons.”

He continued to improve his playing—mostly in the rock ‘n’ roll and blues idioms—and soon became active on the live music circuit in New Jersey. “Since the very beginning, I wanted to be a rock star,” he says with a laugh. But by his mid 20s, Heumiller came to a realization. “After trying to be a rock star for a number of years, I found out it’s hard to eat,” he admits. “So I took a break from that and got into the real world and capitalism.” Through his interest in MIDI (Musical Instrument Digital Interface) technology, he had discovered the world of computer programming, so he pursued a career as a programmer.

“But I soon realized the corporate world was not for me,” he says. “That selling-your-soul thing, wearing a suit and tie, cubicles and long commutes … I had some horrible commutes.” Heumiller’s time in the corporate world did help him develop some skills and knowledge he would eventually put to use in his own endeavor, but as a whole the experience wasn’t one that fed his soul. 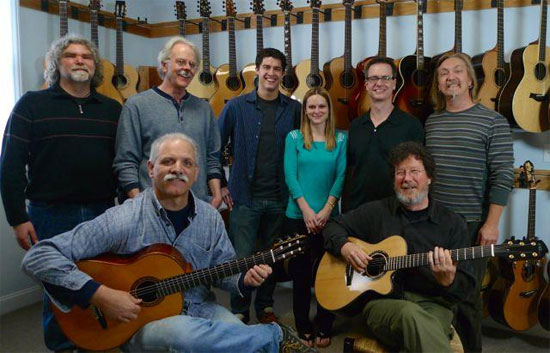 Daring to Dream
As the 20th century drew toward its end, Heumiller took part in something that changed the direction of his life. He signed up for a music camp in New York City called International Guitar Seminars, hosted by famed musicians Woody Mann and Bob Brozman. On the very first day of camp, he met award-winning English guitarist Martin Simpson. “I heard his music,” Paul recalls, “and fell in love with his tone, his approach to music, and his arrangements.” The two became fast friends and soon began working together on an informal basis.

“At Martin’s encouragement, I got the best possible guitar I could afford,” Heumiller says; he bought a a Stefan Sobell instrument. “And then I couldn’t walk by it without grabbing it. My playing [ability] went through the roof thanks to that great guitar.” And that planted the first seeds of an idea in his mind.

“I was doing website work and training [Simpson] how to be better at business—which most musicians need—and he was training me in guitar,” Heumiller recalls. The two would meet on weekends, either in New Jersey or at Simpson’s place in New Orleans. Eventually the two began traveling together, putting on guitar workshops of their own. “That was a business idea I gave him,” Paul explains.

Working with Simpson, Paul became quite familiar with some of the instruments the guitarist was using. “He had a lot of great guitars by custom builders,” Heumiller says. “We would stop and visit their shops, too. There was a point at which I decided to start a web site offering guitars, and Martin encouraged me: ‘Do just the very best. Just offer handmade, because there are so many shops that do everything else.’” From that idea, Dream Guitars was launched in 1999.

Heumiller’s new venture was initially a part-time endeavor. “I was phasing out of programming,” he says. “A big contract I had as a programmer ended and I realized, ‘I don’t think I’m going to get another one.’ And then I sort of took a leap of faith.” He soon embarked on another leap: moving from New Jersey. “This was a move I was making completely with my gut and my heart,” he says. Having visited many cities and towns up and down the east coast, he thought he knew what most places had to offer.

“I was tired of that rat race, and I wanted my kids to grow up somewhere a little slower, with a little bit more meaning,” he explains. He visited a now long-defunct website, findyourspot.com; there, the results of an online quiz offered users suggestions on places potentially best suited for them. He eventually moved his family and business to Weaverville, North Carolina, a bedroom community some 20 minutes north of Asheville. It was there in his new home that he first opened a physical location for Dream Guitars.

Heumiller’s business foundation would be built more upon common sense than on any kind of formal training. “I’m very much an organic businessman,” he says. “I was brought up in a family of hardworking folks and got a good work ethic from my mother, father and brothers.” Having worked for a brother when he was young, Paul witnessed good business practices firsthand. “I recognized what it would take to be a good business person: do a lot of good customer service.”

The most important lesson Heumiller learned early on was a simple one: “Shut up and listen.” He put that into practice when he started Dream Guitars. “My customers were smarter than me,” he says, “but I was smart enough to listen and hear what they said about builders, guitars, why they’re collecting this kind of thing or that kind of thing.” And when he would meet professional musicians, he paid special attention. “I would listen and learn what a pro looks for in a guitar,” he says. “I’ve had a chance to do that for 20 years; I’ve learned a lot about how a pro—versus an amateur—tests out a guitar. And they’re totally different things.”