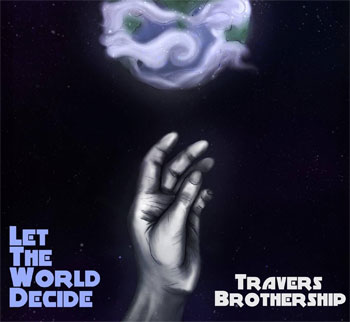 Travers Brothership has been on an upward trajectory for a few years running. The success of the Asheville-based soulful rock band’s 2016 album A Way to Survive eventually led to a touring spot opening for popular jam band moe., and Travers Brothership has built on that success. While making plans for a series of live dates in Europe, the band celebrated the release of its second full-length, Let the World Decide, with a November 2018 hometown show in Asheville.

Inspired in part by their father, guitarist “Hurricane” Bob Travers, brothers Eric and Kyle Travers launched their band in 2012. A debut EP, I Don’t Mind, earned positive notices, and Travers Brothership soon found itself opening for higher-profile, established bands on the jam and festival circuit. Closer to home, in 2015 the group secured a spot at the Xmas Jam by Day. By 2016 and the release of A Way to Survive, the band was named Best Alternative Rock Band in Mountain Xpress’ Best of WNC poll.

It was in late 2016 that Travers Brothership took a decisive step that would help make the band even more successful. “About two years ago is when we got our first professional booking agent and really started touring heavily,” says guitarist Kyle Travers. Since then, he says, “we’ve probably done close to 300 dates all around the country.”

Some artists write songs on the road, but many need the focus that comes with spending time in one’s home studio to compose new material. The members of Travers Brothership find that attending to one thing at a time works best for them. “When we’re on the road, we’re very focused about making the shows better,” Travers says. “When we get home – when we actually have three or four days or a week off – that’s when we can get most of our writing done.”

Still, experience is helping the band become more efficient. It took a long time for Travers Brothership to complete A Way to Survive, but – co-producing again with Grammy-nominated Matt Williams at The Eagle Room – this time the band arrived in the studio with a clutch of new songs ready to be recorded. And time spent in close quarters on the road together – Travers laughingly calls it “van fever” – has made the group more cohesive, resulting in a streamlined approach.

The slimmed-down band’s sound now has less of what Travers calls a “Muscle Shoals feel,” and instead the song arrangements emphasize other elements. “We focus more on the songwriting and our three-part harmonies,” Travers says. “I get an organ solo and two extended guitar solos on the record. Josh [Clark] has a bass solo. It sounds a little bit more like a live show.”

Travers names diverse artists – Snarky Puppy and Jason Isbell among them – as influences upon the band’s current musical direction. “The first album primarily focused on our old-school influences,” he says. “Now we’ve found a way to comfortably blend old and new.” Lyrically, the songs dig a bit deeper as well; that’s likely a natural result of maturation.

“Now that we’ve lived a little bit out there in the world and have been through some stuff together, we can discuss on a more personal level how we feel, and how we believe life works,” Travers says. With hints of Wet Willie and Steely Dan, the deep-groove album opener “Jaded” extols the healing powers of music, expressed through the band’s signature close vocal harmonies.

With the new album complete and being readied for CD and digital release (“a limited vinyl release will come later,” Travers reveals), the band is already turning its attention to the future. “We start 2019 at home, and then we’re going to Europe for a 40-date run in nine different countries,” Travers says. “We’re touring as a headliner; they’ve got a Mercedes Sprinter waiting on us with all of our gear and a tour manager that can translate all the languages.” The six-week tour will be the first time any of the band members have visited Europe. “I don’t think anyone in our band has ever left the country, so it’s going to be quite an exhilarating experience,” Travers says.

The momentum isn’t likely to subside. Once the whirlwind European tour is over, Travers Brothership comes back home to a schedule that includes a number of festival dates. Travers promises, “we’re going to just bust it for the rest of the year.”